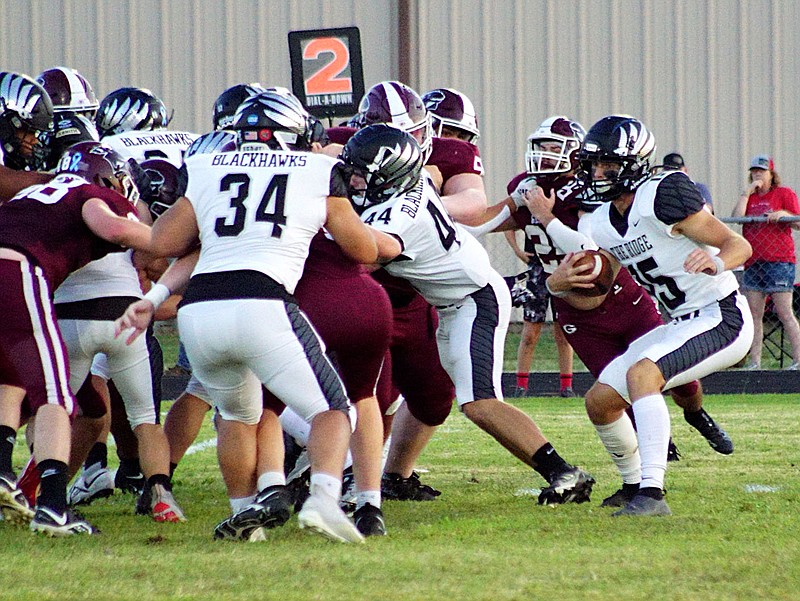 Though the Hawks had not played the Gentry Pioneers since the fall of 2019, there was in place a six-game winning streak Pea Ridge had accumulated from 2013 to the present. The streak is no more.

The Pioneers used their edge in team speed and size to rack up nine touchdowns to overcome the Hawks' four-touchdown production.

Junior Gavin Dixon was a bright spot for the Hawks, rushing 14 times for 140 yards, rushing for a touchdown while passing to senior Kayden Rains for another two scores. Junior Seth Foster scored the other touchdown on a 5-yard run.

The game started well for the Hawks, after Pea Ridge kicked off to Gentry to start the contest, the upman for the Pioneers fumbled the kick with alert Hawks covering the ball at the Gentry 28. Foster rushed for 14 to start the drive, following it up with a 4-yard run to the Pioneer 10. From there, Dixon rolled out left, then outran the defense to the end zone to gain the game's first score. The Hawks led 7-0 barely a minute into the contest.

It soon became apparent that the Pioneers held a decided advantage in speed as they began ripping off numerous big yardage plays, picking up more than 10 yards on 24 plays. Gentry drove 71 yards in 13 plays to knot the score at 7-7 right after the Hawks' score.

After Pea Ridge was held on downs and punted, it took Gentry just two plays to go 55 yards for another score, jumping out to a 14-7 with 1:38 left in the quarter.

Mistakes and a penalty pushed the Hawks back to their own 13 to start their next possession. Three plays netted but a yard, forcing another punt. The punt set the Pioneers up on the Hawk 35, and from there it took just a single pass to score their third touchdown. The flurry put the hosts further ahead 21-7.

Foster then made a short gain to start the next possession with 15 yards added when the Pioneers were charged with a personal foul to move the ball to the Gentry 42. Dixon dashed 8 yards to the Pioneer 34. Foster then rushed twice for short gains, but was awarded 15 more yards when a Pioneer reached in to grab Foster's face mask. Now operating on the Pioneer 10, Rains was all alone in the back of the end zone when Dixon saw him, floating a pass at the 10:03 mark of the second period. Kicker Damien Trejos split the uprights after the score to raise the score to 21-14.

It didn't take Gentry long to answer, launching a 12-play 92-yard play that culminated with a quarterback sneak for 14 yards and a 28-14 lead with 3:08 left in the half. Pea Ridge drove to midfield before turning the ball over on downs following the Pioneers' score. It took the hosts only moments to score, scoring on a 10-yard pass with 16 seconds left. This gave the home boys a 20-point halftime edge over the Hawks, 34-14.

Pea Ridge could not move the ball after the break; the Pioneers got it back, rolling 67 yards in five plays to boost the lead to 40-14.

A Dixon to Thompson pass netted 25 yards with Dixon rushing for 8 yards to cross into Pioneer territory. However, an interception was the impetus to march 80 yards in five plays to further inflate Gentry's lead to 46-14 with 5:58 left in the third.

In spite of several dropped passes in the immediate possession, Dixon made rushes of 11- and 12-yards along with a good 5-yard run by Foster to get close to the red zone at the Pioneer 26. A pass to Fletcher netted 17 to he Pioneer 19. A 14-yard dash by Dixon was followed up with a 5-yard jaunt into the end zone by Foster which shrunk the lead a little to 46-20.

The relief didn't last long as Gentry used five plays to travel 67 yards to paydirt, The PAT was good to allow the Pioneers to ether the fourth quarter with a 53-20 bulge.

Pea Ridge got a drive rolling that began with a 43-yard bomb thrown by Dixon to junior Caden Thompson. Dixon rushed for 7, but the Hawks were pushed back by a 10-yard holding penalty. Dixon got off another 12 yarder, pushing the Hawks down to their own 7-yard line, but the Hawks could not punch it in.

The Hawks had one last possession that began with two Dixon runs for a first down. An 18-yarder from Dixon to Thompson picked up 18 yards, with another personal foul on the Pioneers moving the ball to the Pioneer 32. Dixon then ran for 14 to the Pioneers 18.

The next pass was accurate, but dropped in the end zone. Then a lengthy delay of game ensued when the power to the stadium was shut off by an automatic power program built into the circuit that shuts off power after 10 p.m.

After the lights were restored, the Hawks were helped by another personal foul by the Pioneers to move the ball to the Hawk 10. The next play saw Dixon team up with Rains one more time to score through the air. Foster rammed in the 2-point conversion to set the final score at 59-28.

This week the Hawks will begin league play by hosting new 5A West member Prairie Grove. 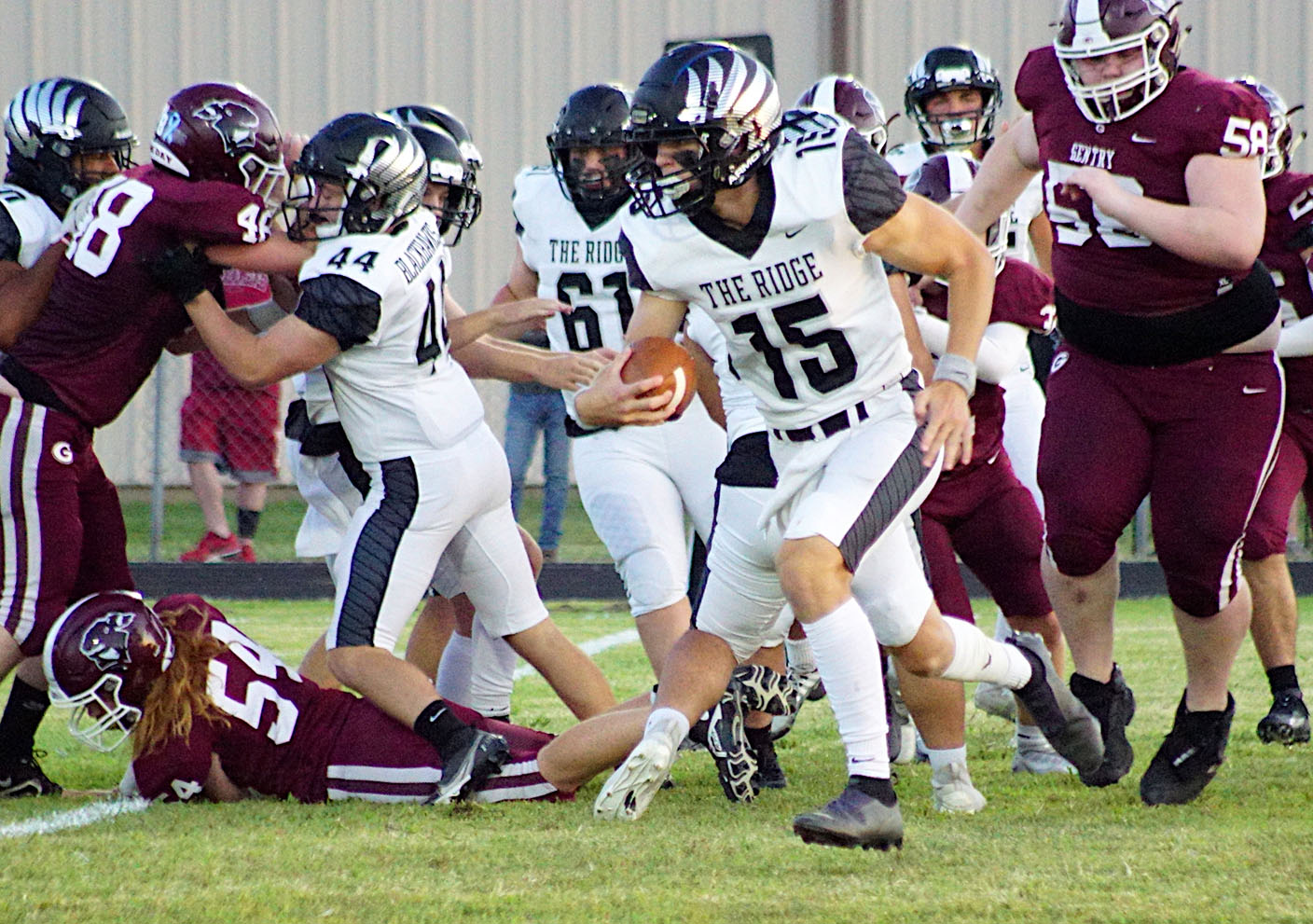 Westside Eagle Observer/RANDY MOLL Pea Ridge quarterback Gavin Dixon runs around the left side early in the game between Gentry and Pea Ridge in Pioneer Stadium on Friday. 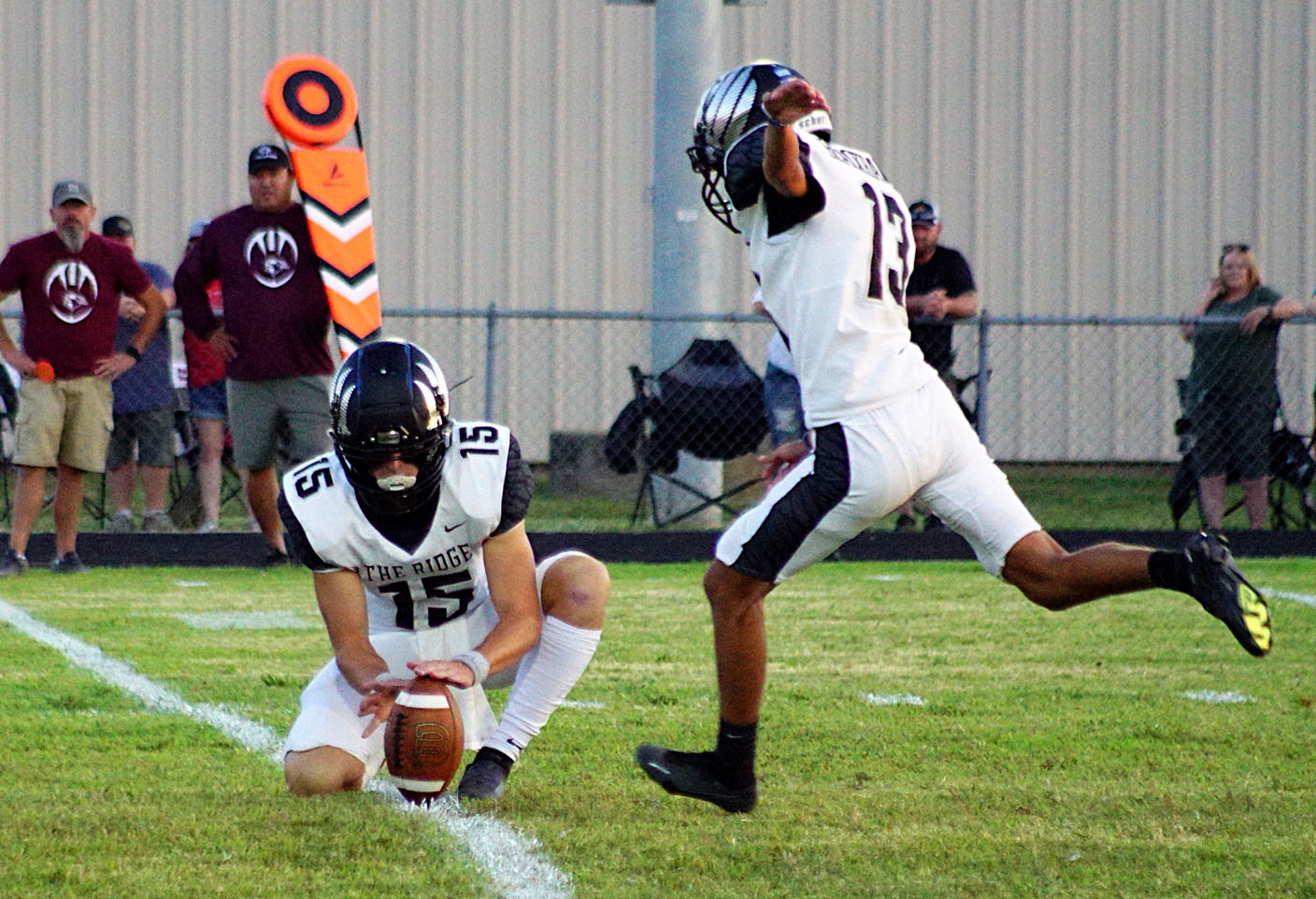 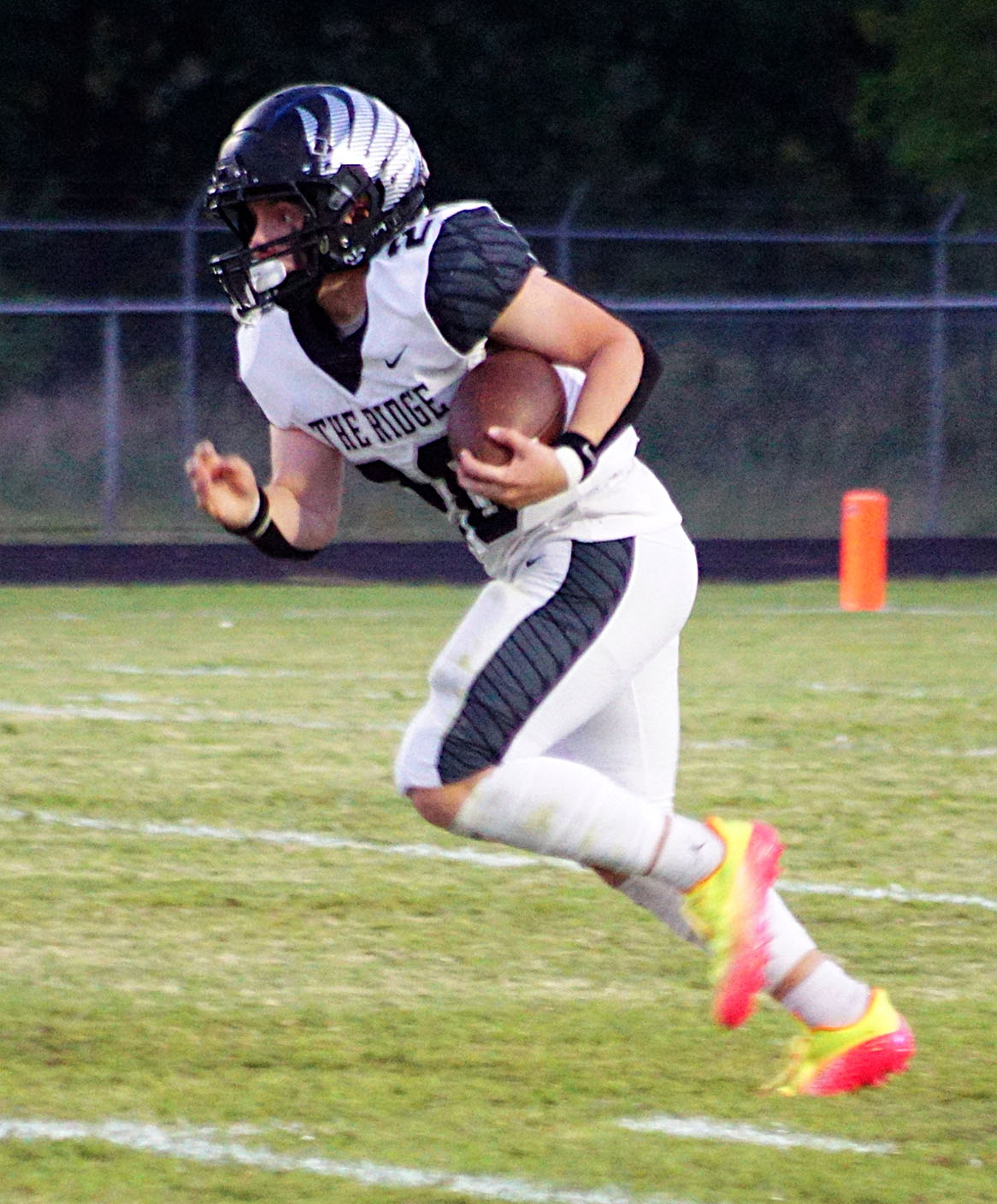 Westside Eagle Observer/RANDY MOLL Seth Foster runs the ball during the game between Gentry and Pea Ridge in Pioneer Stadium on Friday. 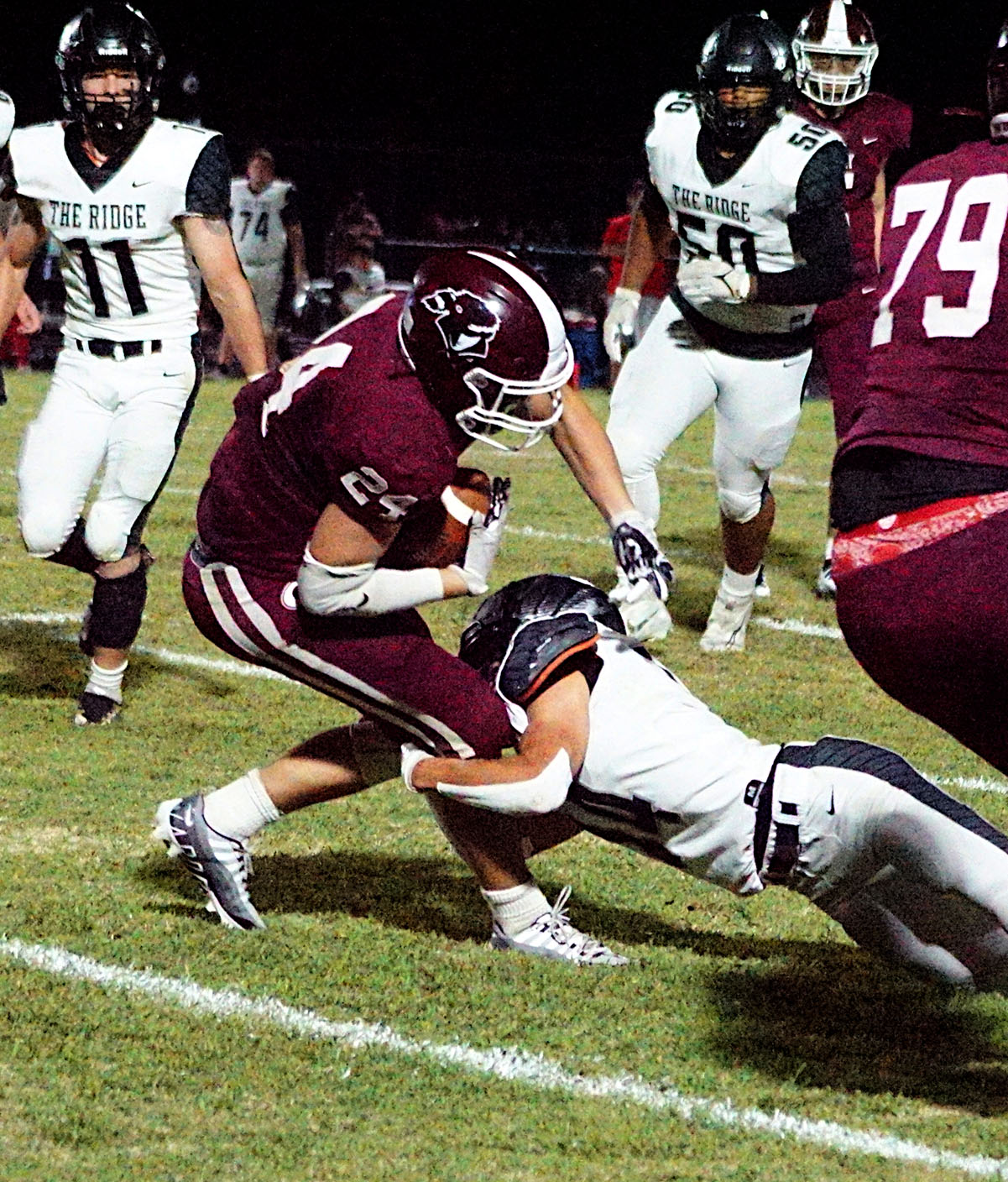 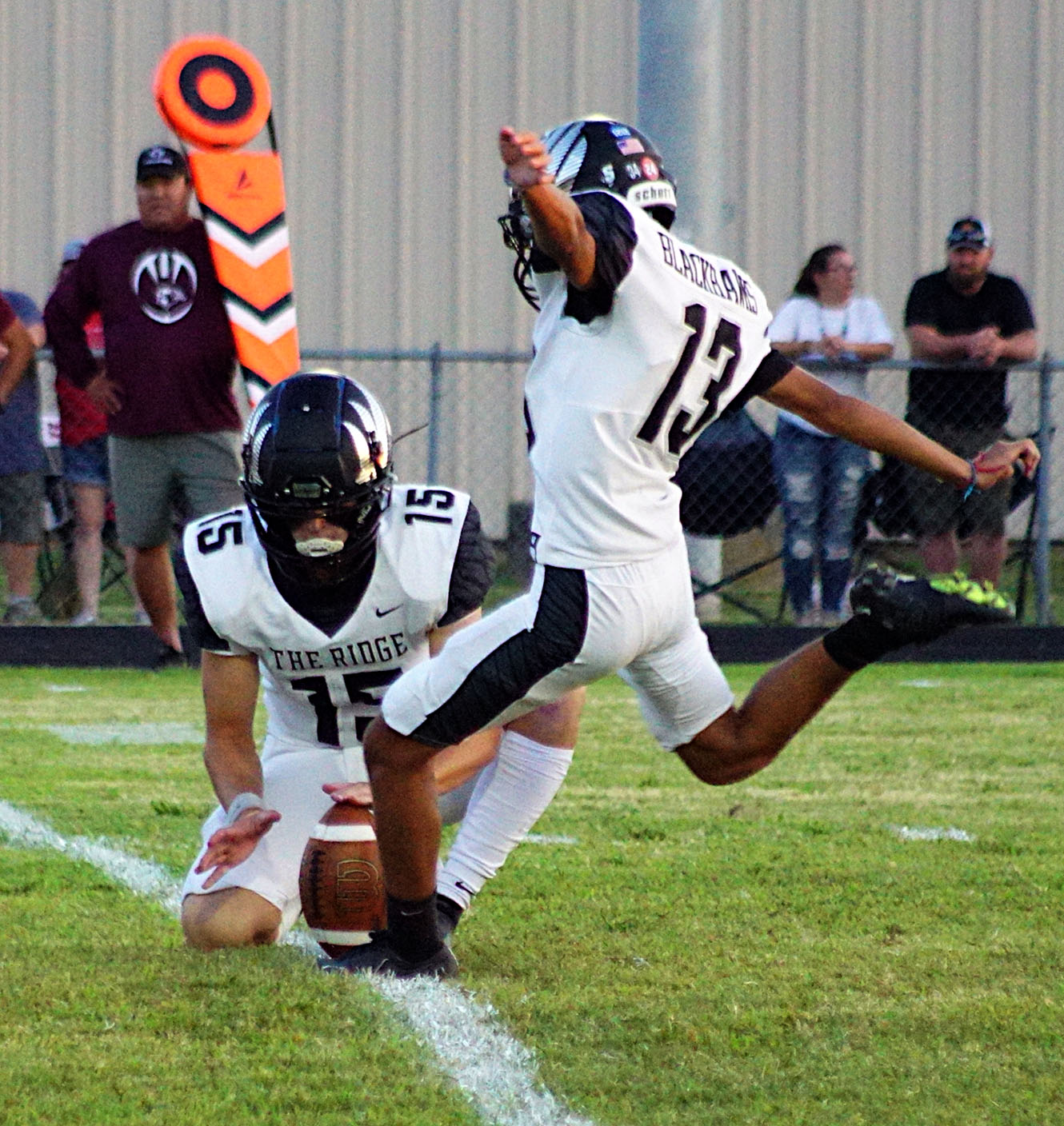