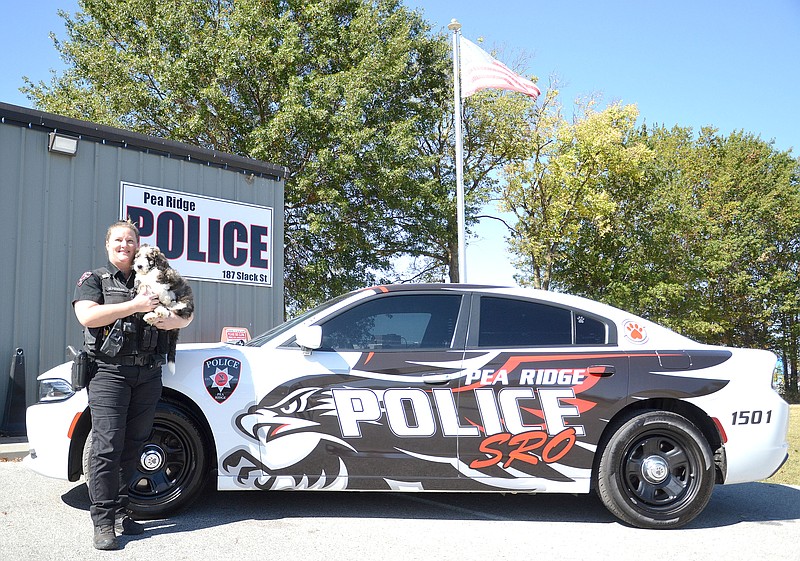 There's a new face -- a furry face -- at the Intermediate School.

Koda, a nine-week-old Bernedoodle, is joining School Resource Officer Mindy Fowler at school. Koda will be used as a therapy dog.

"We are having a puppy naming contest at the school next week," Fowler said, explaining that each class at the Intermediate School will be asked to submit a name for consideration. For now, she's calling the pup Koda.

The furry, black and white pup will live with Fowler full time and is her dog. She said he is up to date on vaccinations and came from Illinois.

Fowler said she has been lobbying for the program for a long time.

"I hope to improve the rapport ... I think it helps to bridge the gap between the officers and the kiddos," Fowler said. She said the students in Special Education are often very comfortable and excited about a dog. She said she has a heart for the students in SPED.

The addition of a therapy dog to the School Resource Officer program "comes in light of the ongoing violence in schools attributed to the overwhelming mental health concerns across the. nation," according to a press release by Lt. John Langham. "With the aid of a therapy dog, SROs will be adding one more layer of assistance to calm students and faculty alike."

Langham and Fowler said they had not found another school-based police therapy dog program in Arkansas.

"We are very excited to see this program grow and the positive effects it will bring to the Pea Ridge School District and the entire community of Pea Ridge," Langham said. "We are very grateful to have dedicated individuals like Officer Fowler whose passions and interests are able to better our department and the great city of Pea Ridge each and every day."

"I'm excited about this because I think it's a move toward taking care of the emotional side of the children ... it's a challenge because almost all of these school violence things were hear about start out with someone who has some kind of emotional, psychological issue and this is just hopefully ... make a difference," said Police Chief Lynn Hahn.

"We'll be in training pretty much for the next 10 months. He'll train in the environment he's in," she said. It will be incremental including kennel training, learning to work without being distracted, basic obedience. "Then we'll slowly start doing introductions with the kids until he's certified."

"I hope to do everything with him," she said. "Obviously his main job will be in the schools for rapport building, self-esteem, teaching them respect."

Fowler is a trained dog trainer, having worked as a canine handler for seven years in Lincoln.

"The training I went through," she said, having graduated from Lead K9, a canine training school in which she learned to be a trainer with "green" dogs, dogs who had no training. She said she's been doing that since 2001.

There are three classes of assistance dogs, Fowler explained. She said a therapy dog is a working dog that is trained and certified to provide comfort to people who need it but do not have the same protections and privileges as service dogs.

A service dog is individually trained to do work or perform tasks for the benefit of an individual with a disability. They are legally defined and protected by the Americans with Disabilities Act (ADA).

Emotional support dogs are pets that can provide therapeutic relief. There are no certification or training requirements for ESDs.

A Bernedoodle is a cross between a Bernese Mountain dog and a poodle. Fowler said the breed is considered the perfect companion dog because of its intelligence, friendliness and non-shedding, hypoallergenic coat.

The dog will only work with students who want to work with him, Fowler said, adding that she is mindful and considerate of students who either do not like dogs or are afraid of them.

She said he will be slowly acclimated to the school environment before being utilized in classrooms for any extended period of time.

"I think it's a great rapport building thing for the community as well," Fowler said, explaining that she hopes to have the pup at all kinds of community events.