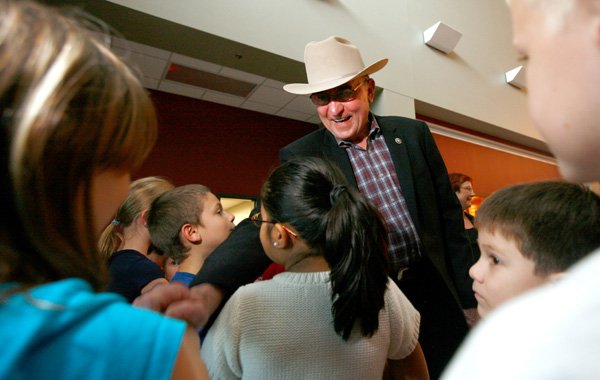 "He was a hell of a guy," Mike Sydoriak said. "I enjoyed working with him."

Sydoriak served as captain and head of the criminal investigation division during Ferguson's tenure over the Sheriff's Office.

Sydoriak said he talked to Ferguson a few months ago and learned of his death Saturday. Ferguson was 79.

"I really liked him and of all the sheriffs I worked for, Ferguson was my favorite," Sydoriak said.

Sydoriak said he worked for five or six sheriffs.

He said he first met Ferguson while working in the jail and Ferguson would bring people to the jail.

"He (Ferguson) was a real sheriff for the deputies and fought for them," Sydoriak said. "He was a good guy, but he could get mad at you."

Sydoriak said he was always amazed by the number of Ferguson's friends and it seemed Ferguson knew everyone.

"We could go to lunch and he knew everyone," Sydoriak said. "He could hardly eat from talking to so many people."

Ferguson was a state trooper for more than three decades before serving five terms as sheriff, from 2003 to 2012.

Benton County Circuit Judge Robin Green said she had the privilege to work with Ferguson on criminal investigations when she was prosecuting attorney and then on civil matters and lawsuits when she was the county's civil attorney.

"He was known for being calm and composed in high-stress situations and fearless in the face of violent situations," Green said. "On many occasions I saw Sheriff Ferguson display the courage to stand up for what was right even under pressure to do otherwise. He will be sorely missed."

"Sheriff Keith Ferguson was someone I had so much respect for," Sparks said. "He was a great sheriff, mentor and always supported Kimberly and I. He took an active role in community policing and was a main contributor to the creation of the Police Athletic League."

Ferguson began his career as a trooper with the Arkansas State Police in 1969, and retired from that in 2002. That was the same year he made his first bid for the sheriff's office, when he won a runoff election in a three-way race in the Republican primary. There was no Democratic opponent, so he took the helm of the Sheriff's Office on Jan. 1, 2003. He retired at the end of 2012.

Pea Ridge Police Chief Lynn Hahn posted on Facebook about Ferguson and said he was saddened to hear about his death.

"He gave me my first shot in law enforcement, and I worked with him for several years," Hahn said in the post. "He had his ups and downs, like us all, but he was a good man, and served the citizens of this state for 43 years. RIP Sheriff."

Other former deputies who worked for Ferguson also posted about his death.

"Sad to hear of former Sheriff Keith Ferguson's passing this morning," Glenn Latham, a former deputy posted. "R.I.P. Keith - you were one of a kind."

Don Kendall, a longtime friend of Ferguson, said in 2012 at Ferguson's retirement ceremony while Ferguson was a state trooper, he placed his life in harm's way on different occasions, including aiding another officer to save a fellow police officer during the Frankie Parker standoff at the Rogers Police Department on Nov. 5, 1984.

Kendall referred to Ferguson as his best friend Saturday on Facebook.

"He was a very good man and he was a good sheriff," said Tom Allen, a longtime Benton County justice of the peace. "His heart was for law enforcement."

Susan Anglin, another Benton County justice of the peace, remembers Ferguson giving her a tour of the county jail.

"That has helped me on the years that I have served on the court," she said.

She said Ferguson was a benefit to the county's rural residents.

"He understood rural life," said Anglin, who called him a dedicated public servant.

"He had a very long law-enforcement history," she said. "I have great respect for him as a person and as a member of law enforcement."