TIMES photograph by Annette Beard Blackhawk senior Evan Anderson, No. 40, returned to sports after being sidelined during football season due to an injury. For more photographs, go to the PRT gallery at https://tnebc.nwaonline.com/photos/.

Trent Loyd's varsity boys' basketball took a couple of quarters to get revved up, but once they did they erupted for 24 points in the third quarter in their 61-56 come from behind win in their season opener victory over Alma. Two days later, they kept rolling, racing out to an insurmountable lead in their 53-24 conquest of Rogers Providence.

The visiting Airedales jumped out to a 5-point lead in the first period, hitting three treys, two by Easton Boggs, along with three other goals and two for two free throw shooting. The Hawks countered with a pair of 3-pointers by Ben Wheeler, with Josh Turner hitting a bucket and free throw to go with a solo shot by Jeriah Gamez as Pea Ridge trailed 17-12 headed into the second period.

The Hawks' James Bledsoe caught fire in the second period, firing in four 3-pointers to lead a comeback. Though the Hawks' only other offense was a field goal by Turner, tighter defense shrank the lead a tad, with Alma going into the break with only a 4-point lead at 30-26.

The Hawks came out of intermission like a hurricane, limiting their guests to just 9 points of offense while jamming through 24 points of their own to take a 50-39 lead headed into the final period. It was Bledsoe again leading the charge, raining down three treys, a field goal and a free toss to score half the total, with the other Hawks warming up to feed the tsunami. Turner hit three goals inside the arc along with a free throw, with Wheeler dropping a shot from downtown. Bric Cates scored inside the Hawks other points as the boys from the Ridge surged ahead by 11.

Alma matched their first quarter offense in the fourth with 17, and while Hawks could only muster 11 points in the final period, the third quarter explosion was all the offense the Hawks would need in notching their first win of the season. Wheeler came up big with a trey and field goal, with Austin James ripping a trey and Turner converting an old-time trey with a bucket and free throw.

Bledsoe led all Hawk scorers with 24 followed by Turner and Wheeler with 15 each, James with 3 and Cates 2. Boggs and Israel Towns-Robinson led Alma with 16 apiece.

The visiting Pointers could have been treated for shock after the Blackhawk girls nearly ran them out of the gym in the first quarter, holding their guests to zero field goals and only three free throws. The Hawks had five girls combine for 18 points to take an 18-3 lead and were never seriously threatened in the season opener for both teams.

While the Pointers went goalless, the Hawks shot through five, with Leah Telgemeier canning two treys along with a pair of free throws. Jadyn Spivey added to the onslaught with a goal and pair of free throws, while Raegan Bleything hit one behind the arc, Mia Dayberry sank one inside the arc, and Makenzie Stites nailed a free toss.

Van Buren did manage to finally hit from the field in the second period, scoring three goals and a free throw for 8 points. The Hawks cooled off slightly in the second quarter, but not much as they rang up 16 points to give the Ridge girls an imposing 34-11 lead at the break. Spivey led the offense with a trey, a goal, Telgemeier hit another trey, and added a regular goal, and Reilly Ingram came alive with a 3-shot and a pair of free tosses. Pea Ridge went into the break in control of the game, leading 34-11.

The Pointers finally got untrack offensively in the third period, more than doubling their score mostly due to 3-point shooting by Myers. It did nothing to make a game of it as the Hawks pumped in 16 of their own points to take a 50-25 lead into the final period.

Telgemeier sank a trey and field goal, Stites had a double score, and Bleything had a goal and two freebies to lead the charge. Morgan Gaston added a pair of charity shots with Dayberry adding one.

Dayberry had a pair of goals in the final period, along with short goals by Spivey and Sydney Spears. Van Buren started firing in treys in the final quarter, sinking five of them to make the final score a little more respectable. The outcome was still a double digit victory for the locals as the game ended with the Hawks ahead 57-44.

Telegemeier led the scoring with 18 points with Spivey also in double figures with 12. Bleything and Dayberry ended with 7 each, with Stites scoring 5, Ingram 5, Spears 2, and Gaston 1.

Loyd's cagers jumped out to a 10-point lead, 16-6, and it was all downhill from there as the Hawks were never threatened in their 53-24 conquest of Providence.

The visitors were consistent in that they scored 6 points in each and every quarter of the game, while Pea Ridge countered with 16, 20, 12, and 5 in their four quarters of offense.

Bledsoe heated up in the second, ripping a pair of treys with Wheeler also hitting one behind the arc. Jeriah Gamez was the big scorer in the period, hitting three field goals and a free throw. Bric Cates and Evan Anderson rounded out the scoring with solo shots, helping the Hawks head into intermission in complete control of the game, leading 36-12.

Wheeler scored his third and fourth 3-point shots of the game in the third period with the Hawks other 6 points coming via field goals by Cates, Thurman and Jacob Ogburn. Pea Ridge headed into the final period with a daunting 48-18 advantage.

The Hawks' bench was cleared in the final quarter, but the defense was still able to keep their foes from scoring more than 6. The Hawks managed to score 5 bench points with Braydon Wright ripping a trey and Emmitt Dayberry adding a field goal. The buzzer sounded and the Hawks had secured a 53-24 victory to go 2-0 on the young season.

The 6A Bentonville West Wolverines raced past Pea Ridge 56-29 to hand the young Blackhawks their first loss of the season. 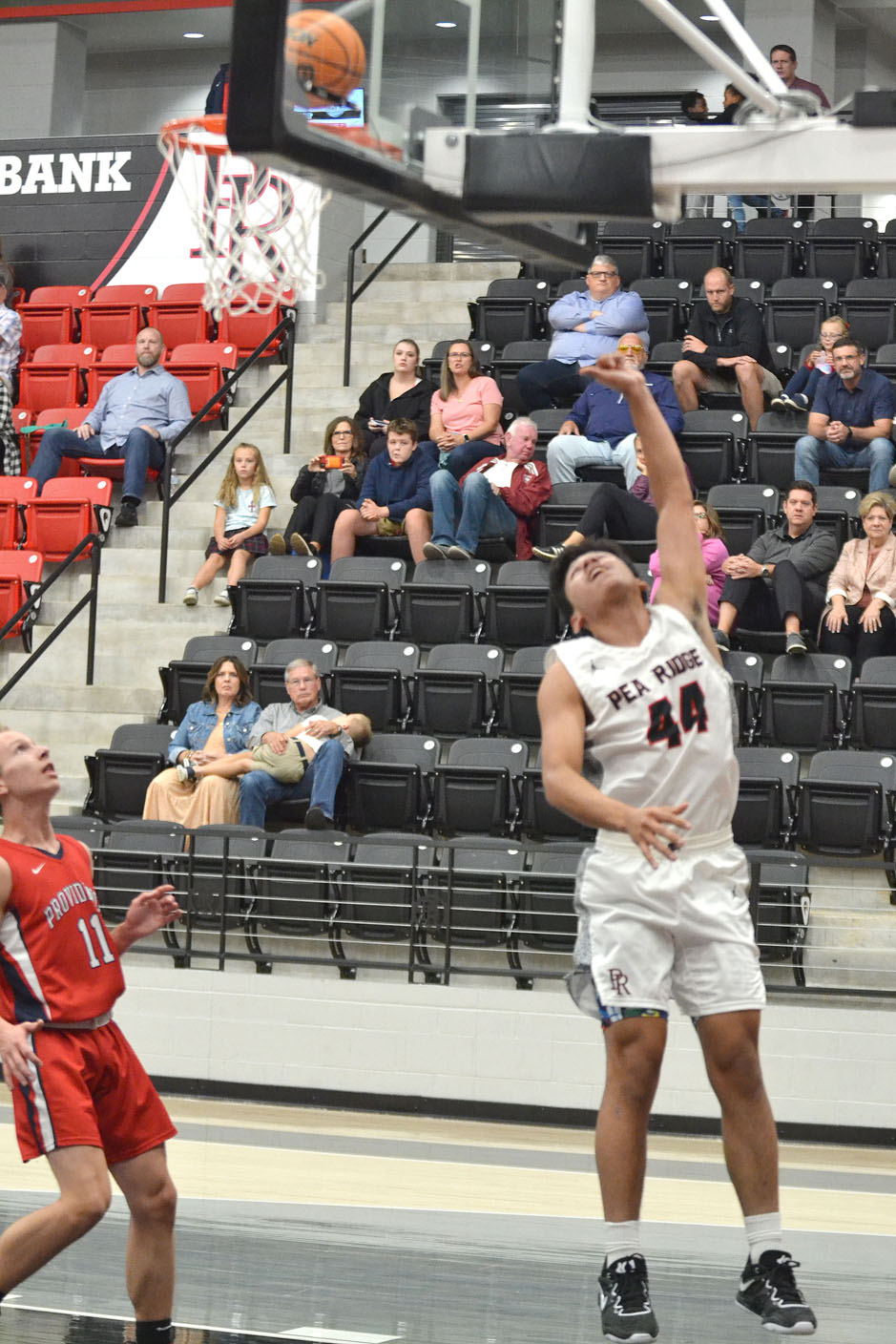 TIMES photograph by Annette Beard Blackhawk senior Jeriah Gamez, No. 44, shoots Thursday in the game against Providence. For more photographs, go to the PRT gallery at https://tnebc.nwaonline.com/photos/. 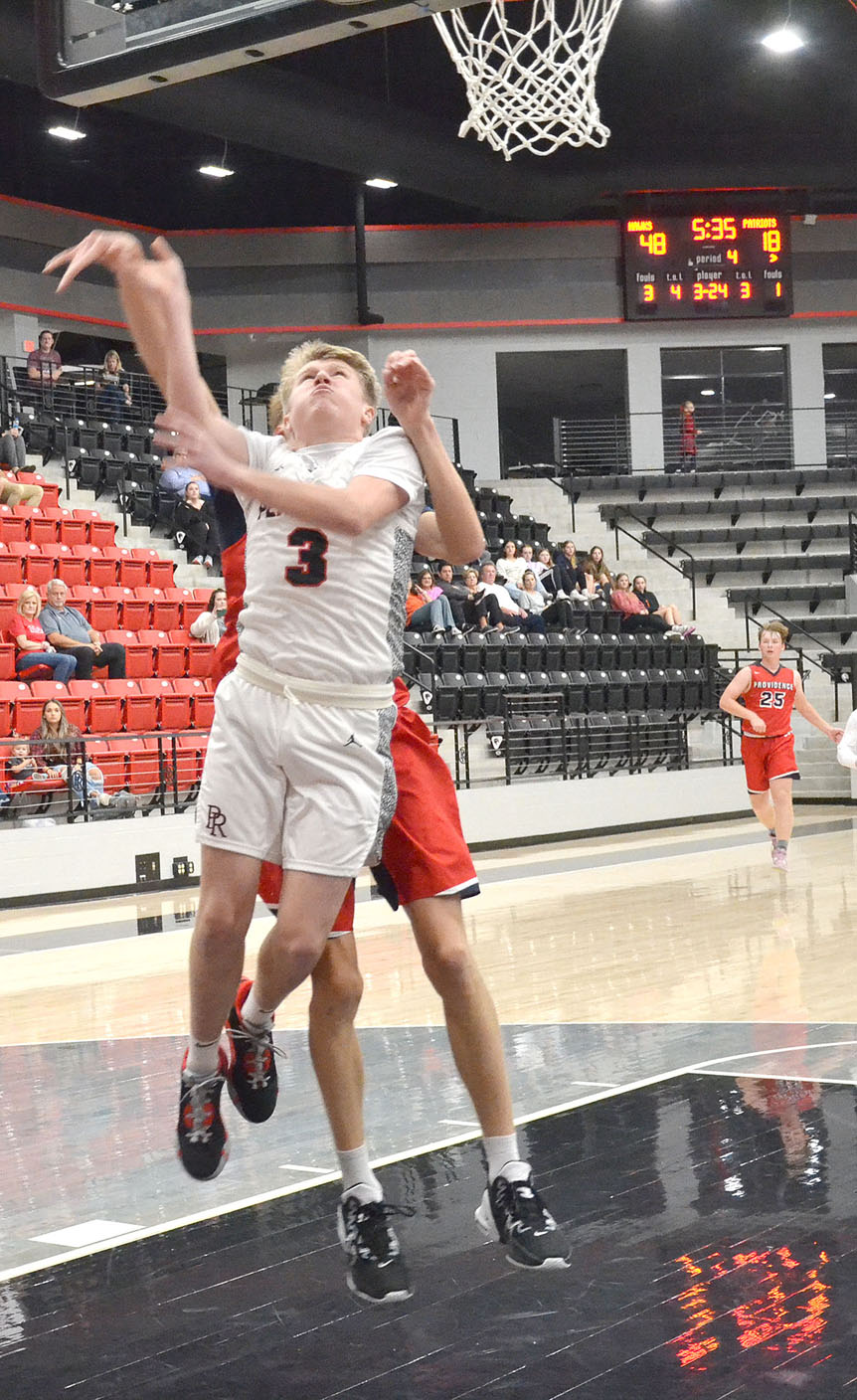 TIMES photograph by Annette Beard Blackhawk sophomore Jacob Ogburn, No. 3, went up for a shot Thursday, Nov. 10, in the game against Providence. For more photographs, go to the PRT gallery at https://tnebc.nwaonline.com/photos/. 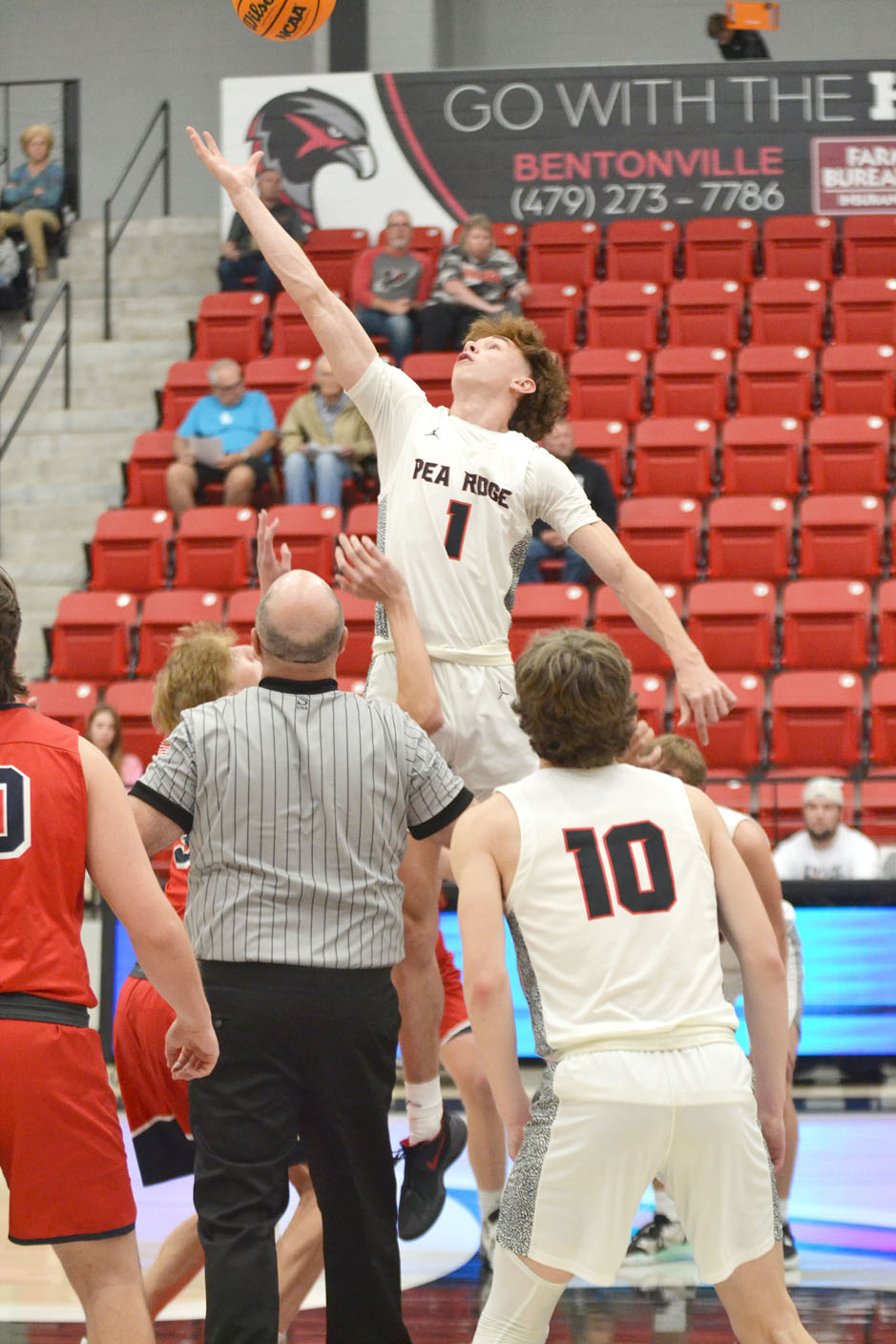 TIMES photograph by Annette Beard Blackhawk junior Ben Wheeler, No. 1, was the high scorer for the team Thursday, Nov. 10, in the game against Providence. For more photographs, go to the PRT gallery at https://tnebc.nwaonline.com/photos/. 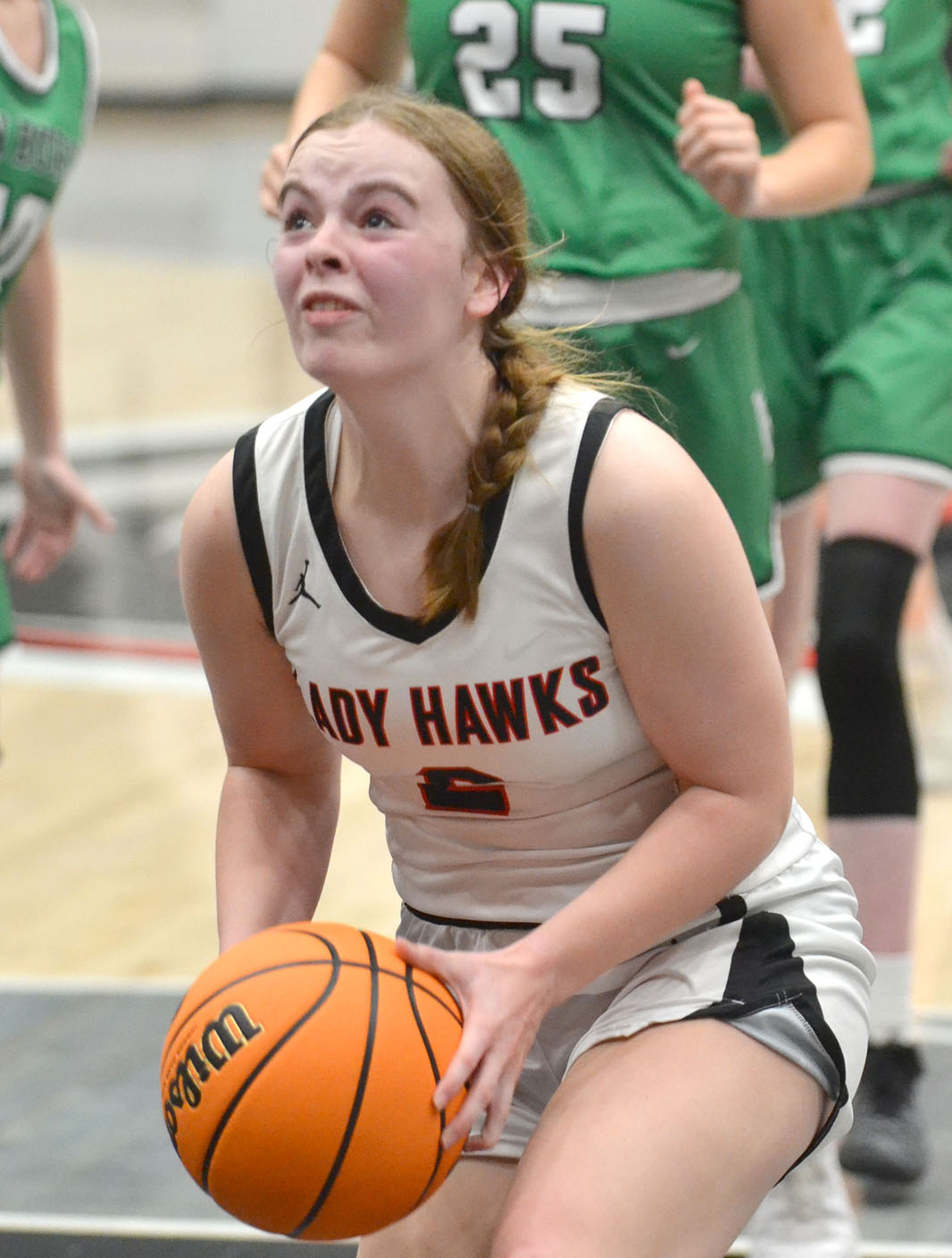 TIMES photograph by Annette Beard Junior Lady Blackhawk Leah Telgemeier, No. 2, goes for a basket Tuesday, Nov. 8, in the game against Van Buren. Telgemeier led the scoring with 18 points. For more photographs, go to the PRT gallery at https://tnebc.nwaonline.com/photos/. 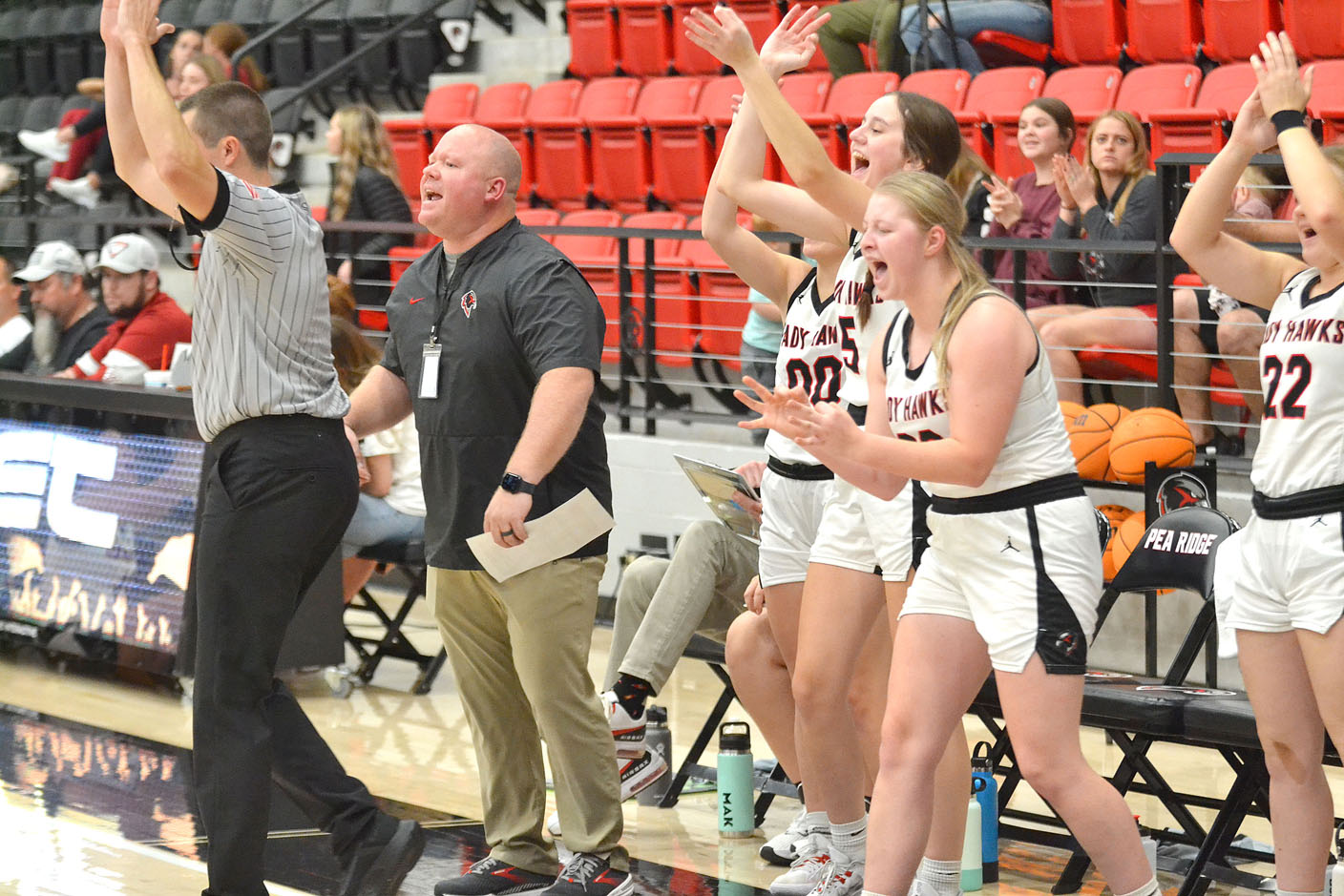 TIMES photograph by Annette Beard The Lady Blackhawks on the bench rejoiced at a successful shot by team mate Leah Telgemeier Tuesday, Nov. 8, in the arena at Pea Ridge High School. For more photographs, go to the PRT gallery at https://tnebc.nwaonline.com/photos/. 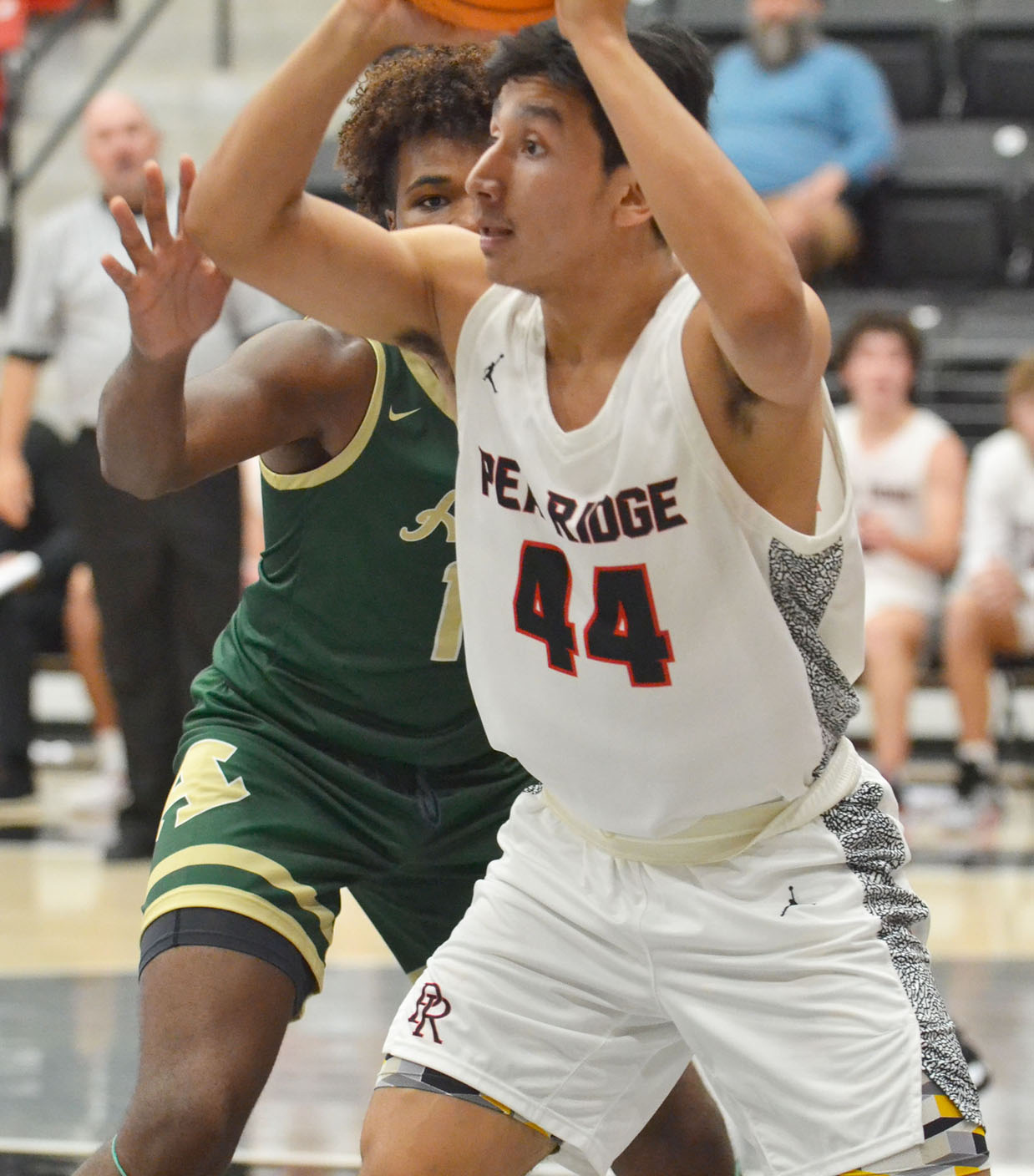 TIMES photograph by Annette Beard Blackhawk senior Jeriah Gamez, No. 44, looks for an opening Tuesday, Nov. 8, in the game against Alma. For more photographs, go to the PRT gallery at https://tnebc.nwaonline.com/photos/. 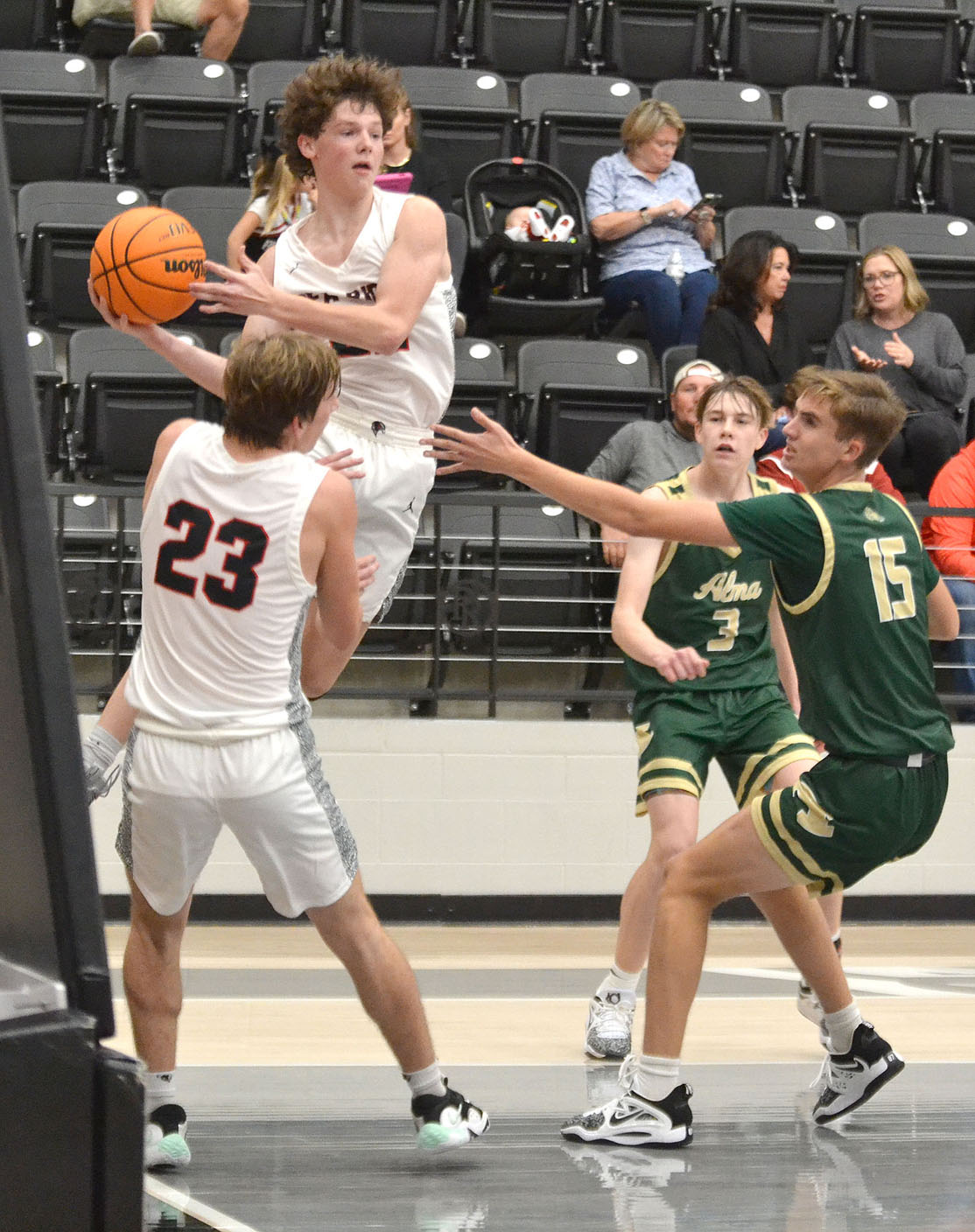 TIMES photograph by Annette Beard Blackhawk sophomore James Bledsoe, No. 22, led the scoring for the Blackhawks Tuesday, Nov. 8, with 24 points in the game against Alma. Junior Josh Turner, No. 23, had 15 points. For more photographs, go to the PRT gallery at https://tnebc.nwaonline.com/photos/. 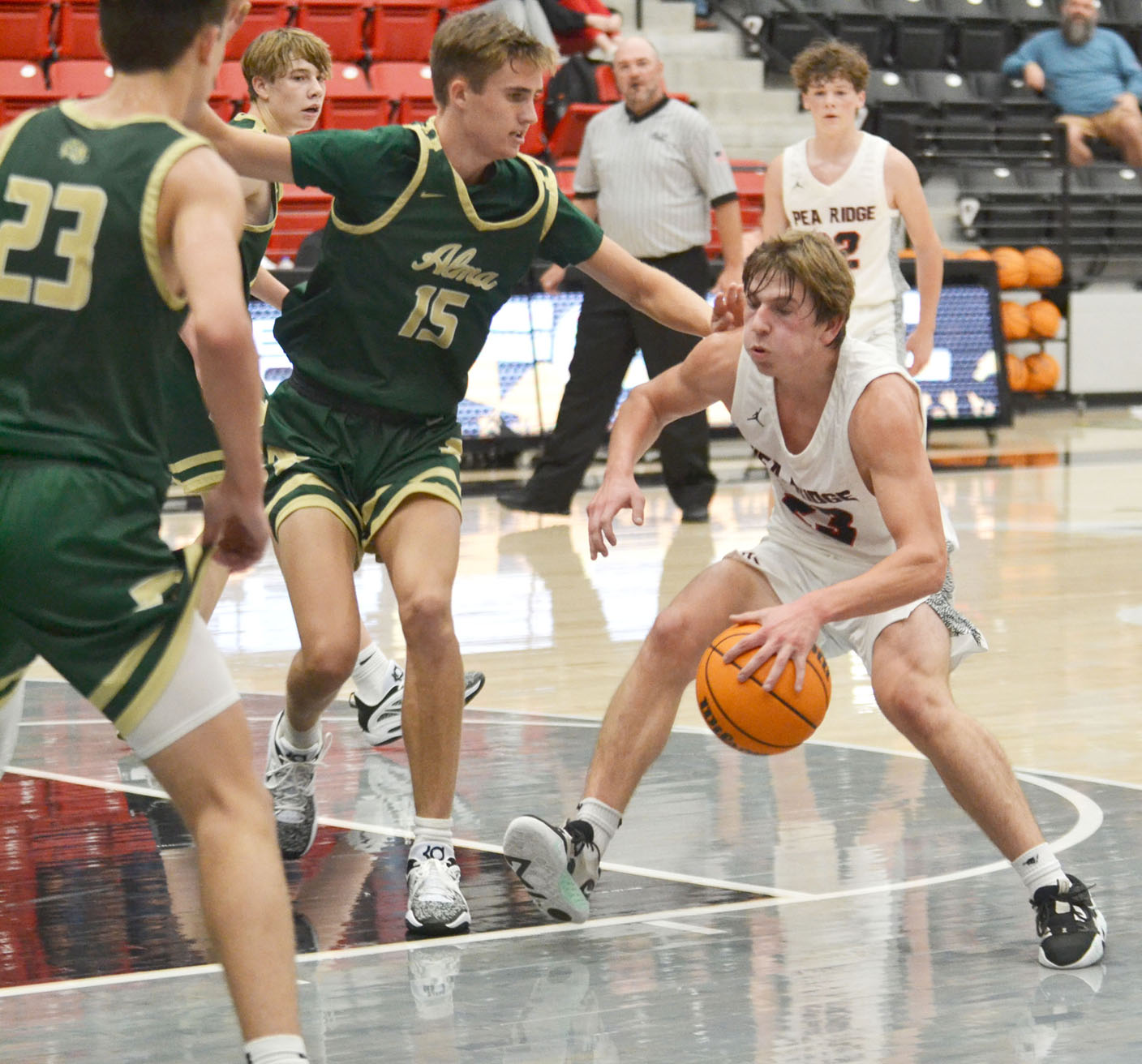 TIMES photograph by Annette Beard Blackhawk junior Josh Turner, No. 23, rushed to the basket Tuesday, Nov. 8, in the game against Alma. For more photographs, go to the PRT gallery at https://tnebc.nwaonline.com/photos/. 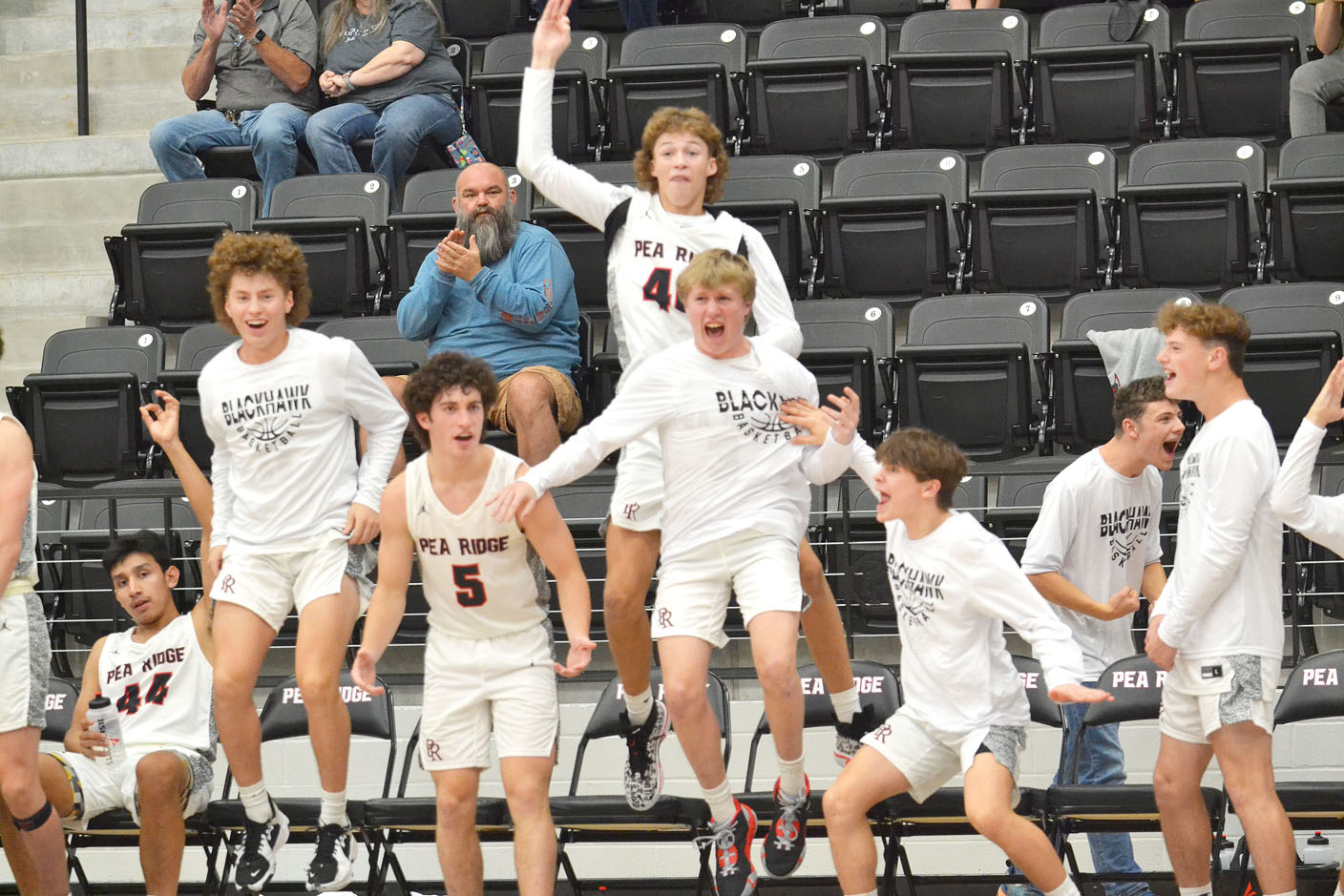 TIMES photograph by Annette Beard Blackhawks were elated at the successful shot by one of their team mates Thursday, Nov. 10. For more photographs, go to the PRT gallery at https://tnebc.nwaonline.com/photos/.