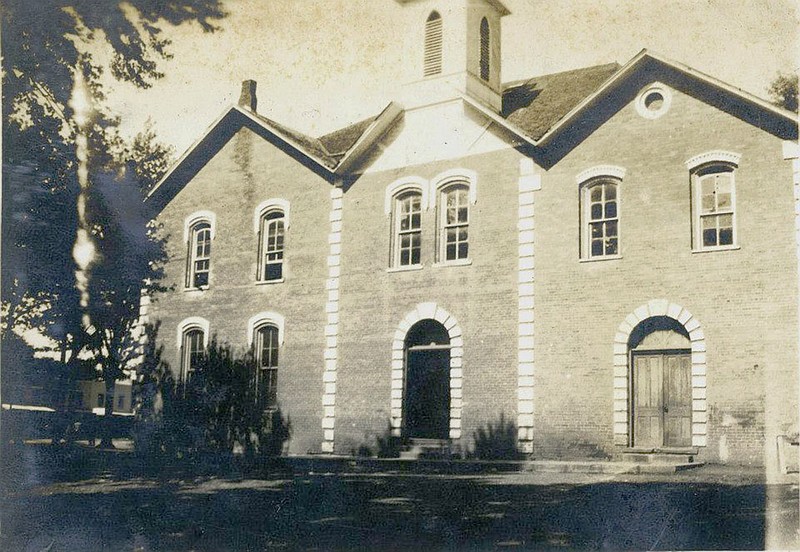 Pea Ridge School District No. 109 had its beginning as part of the historic old Pea Ridge College.

Earlier, there had been other local schools such as Skeleton Academy by 1851 and Mount Vernon Academy soon after.

In 1874, Pea Ridge College was founded by Professor J.R. Roberts. It was known variously as Pea Ridge Academy, Pea Ridge Normal college and Pea Ridge Masonic College. It was first located at Buttram's Chapel, then in 1884 it opened in a new brick building at the site later occupied by the Pea Ridge High School and currently, the lawn in front of the Pea Ridge Intermediate School.

At both sites, the college also contained an elementary school. A board of directors was in charge of the public school while trustees handled affairs of the college. Finally, in about 1916, the college evolved into the Pea Ridge High School.

For one three-year period, in the 1890s, the elementary was located at Hilltop School building a half-mile west of the campus, returning later to the college building. The Hilltop building exists today as a residence at the corner of West Pickens Road (Ark. Hwy. 94) and Green Street.

In 1929, the college building was razed and the high school structure was erected. For many years, the school building housed all students from first through 12th grades. Bricks, hand-made locally, from the college building were sued to erect a gymnasium in 1931. When the gym was razed in 1984, some of the bricks were used to erect the Pea Ridge College Memorial Bell Tower on the campus. It houses the bell purchased by the college in 1888.

Many educators have served the Pea Ridge school system throughout its history.

Through the years, some of the small schools near Pea Ridge were taken into the Pea Ridge system, including Shady Grove, Cross Lanes, Possom Trot and Sassafras. Some had already fed their high-school age students into Pea Ridge while maintaining elementary schools.

In 1947, a new state law brought about a rash of consolidations in the state. The law stated: "The County Board of Education may dissolve any school district an annex the territory thereof to any district within the county when petitioned to do so by a majority of the qualified electors of the district to be dissolved or by an election held in the district to be dissolved where a majority of the votes cast are in favor."

Among those petitioning to come into the Pea Ridge system were Twelve Corners, Central and Bayless. Corinth chose to have its territory divided between Pea Ridge and Garfield schools.

The next year, 1948, another state law was approved. It stated: "On June 1, 1949, there is hereby created in each county a new school district which shall be composed of the territory of all school districts administered in the county which had less than 350 enumerated on March 1, 1949."

Pea Ridge, with its less than 350 enrollment, knew that it had to do something to save its school. Together with Garfield and Bayless, an attempt was made to create a new district out of the combined territory of the three schools. The election was held Feb. 26, 1949, with polling places at each of the three districts. The proposal was passed handily at Pea Ridge and Bayless, but failed overwhelmingly at Garfield. Pea Ridge voted 183 in favor to four against. Bayless passed it 17 to six. Garfield defeated it with 34 in favor and 97 against.

Garfield then became part of the Rogers school system. Pea Ridge and Bayless, as well as Central School and Sulphur Springs School, became Benton County District No. 1, while a principal headed each school. Meantime, Bayless consolidated with Pea Ridge.

For 18 years, Pea Ridge continued as part of Benton County District No. 1. It still operated its own school finances and plans and even erected an elementary building during that time. The board of directors for District No. 1 had been made up of persons from throughout the District No. 1 territory. The first such board elected July 9, 1949, included Hugh H. Webb, W.C. Seiler, Forrest Gann. G. Joe Sibley and Lewis Bell.

The population of Pea Ridge and its school enrollment grew. Thus, in 1967 a majority of certified voters in the Pea Ridge district requested and were granted the right to be restored to its independent district status, resuming its original 109 number.

It again hired its own superintendent, Andrew Widener, first, then in a few years, Roy A. Roe. Upon Roe's retirement, James C. Carlton was hired. William D. Alvarez succeeded him.

School enrollment was 649 students with 347 in kindergarten through sixth grade, 302 in seventh through 12th grades. The football stadium was located about three blocks south of the campus. The board of directors was Ronnie Foster, president; Kent Webb, vice president; Tonny Fletcher, secretary; Doug McKinney and John Brown. (There was not a year for this information.)

In 1989, school enrollment was a total of 715 students with 420 in kindergarten through sixth grade and 295 in seventh through 12th grades. The School Board members were Ronnie Foster, president; John Brown, vice president; Mike Small, secretary; Dough McKinney and Jackie Crabtree. School superintendent was Marvin Higginbottom; secretary to superintendent was Joyce McMath; and bookkeeper was Patty Robinson.

In 2000, the school superintendent was Roy Norvell and the school had outgrown the facilities. A new high school was constructed at the corner of Weston Street and West Pickens Road (Ark. Hwy. 94).

Editor's note: Information for this article came from Pea Ridge Graphic files and from "Pea Ridge, 1850-2000; Anchored to the Past, Rising to the Future," a local history book. The book is available for reference at the Pea Ridge Community Library.