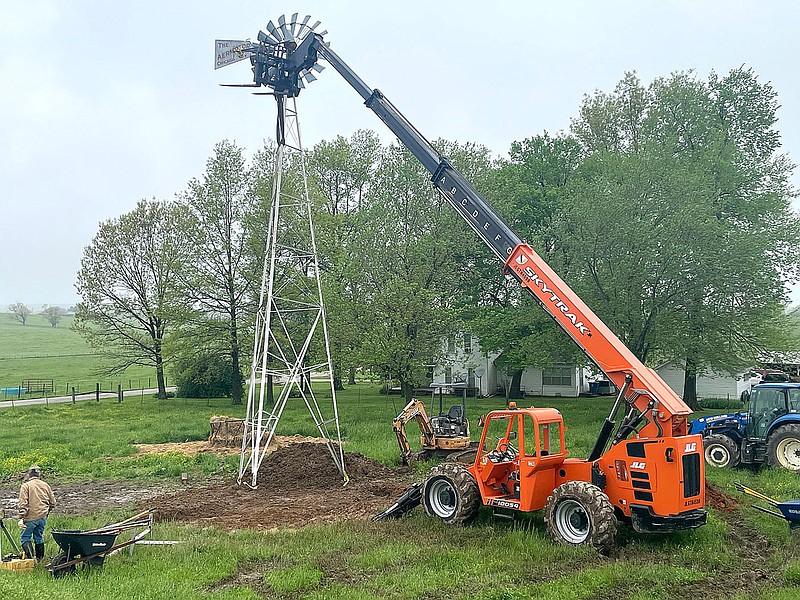 A century-old windmill that stood as a silent, although sometimes creaky, sentinel over a family farm for many, many years, then, over a neighborhood as the town grew up around it has been moved.

Nearly two decades ago (2003), the Miller family farm that was originally south of town, was sold and developed as a subdivision with 57 houses. The lot on which the original farm house stood was undeveloped as the windmill remained, even lending its name to the subdivision -- Windmill Estates.

This year, a prospective buyer sought to rezone the lot, remove the windmill and build residences on the lot. The request received numerous objections from area residents who said they wanted to see a park created there. The city Planning Commission denied the rezone request.

Last week, the windmill was removed and taken to a historic family farm north of town by Robert and Jenny Wood who bought and relocated the windmill.

Jenny attributed her love of antiques to her mother Jackie Rogers. She said that fondness for antiques and her husband, Robert's love of the farm, was a perfect combination as a motivation to saving the windmill.

Twenty-five years ago when they married, Robert Wood, a multi-generation Pea Ridge resident, knew the only way he was going to get Jenny to move to Pea Ridge was to find a house in town. He, having been raised on the farm, wanted to be able see cows and a hay field.

When a house came up for sale on Patton Street that was in the middle of town, Robert knew it was the solution. Jenny said they could see 40 acres of the old Miller farm out the front room window. It was a win for both.

"We moved in just two days before our first daughter was born 25 years ago this month," Jenny said, adding that they eventually had two more children. "We lived next to Windmill Estates for nine years while raising our family and still have the house there today."

"Our kids grew up seeing the windmill daily and watching and waving to J.C. Beaver as he cut hay on that property," Jenny said.

"We saw the land be divided and the new subdivision go in. We were happy to hear from Martha Ruth (Miller Hall) that she planned on building a house there one day and she was excited about the restoration of the old family windmill."

Fast forward to the last six months, Jenny said "someone casually mentioned to us that the windmill might be for sale. They knew that we had deep roots in Pea Ridge and we had bought and restored wood flooring that was in the old high school before it was torn down. We reached out to Gary Hardy and had several discussions with him."

Hardy, a descendant of the owner of the Miller farm, is the administrator of the estate. He is a cousin of the former owner, Martha Ruth Miller Hall.

He said he has been working on the estate for months and tried to get some of the homeowners to form an association to purchase the lot and windmill to make a park, but was unsuccessful in that.

There was a lot of emotion and misinformation put out about the property and what the motivation was behind selling it," Hardy said. In a social media post last December, Hardy explained the lot being put up for sale. He said the lot and windmill were owned by an unsettled estate that was in probate. He said the estate had been paying taxes and lawn maintenance but could not continue.

Hardy said he understands the sentiment that "everyone has for this long standing piece of the city's heritage."

"Please also understand that I am myself sentimentally attached to the windmill and the lot it stands on. This is property that has been in my family for many decades. I stayed in the old house and played in the shed when I was a kid," Hardy said.

When Robert Wood approached Hardy, he told him of his connection to Pea Ridge.

"Gary soon realized that it (the windmill) would end up at a farm that would take care of it and not be sold for scrap metal. He had tried everything to keep the windmill and lot together but nothing worked," Jenny said.

"Once the sale went through the proper channels, the next question was how does one move a windmill. There are the logistics of the actual move, and then there is the side of that this is a 'Pea Ridge historical' fixture that people will be very emotional about.

"The stress of the actual move was on Todd Crowder with Crowder Construction" who the Woods hired to move the windmill.

"This past week the timing was right. During the months of planning the next question was where to put it? We decided not to put it at our place but on the family farm north of Pea Ridge, where it would look like it had been there for years and people can easily see it. The Wood family farm was originally Robert's Grandma Ora (Webb) Woods family's since the mid 1800s.

The two-story farm house is 114 years old and the farm has been in the Wood family since Robert's grandparents Owen and Ora Woods moved to the farm house in 1945.

The youngest generation (Robert and Jenny's children) are about the sixth generation to operate the farm.

Owen and Ora had a dairy. Tim and Sharon, their son and daughter-in-law, helped run the farm and transitioned it to producing beef cattle and hay. Sharon, Robert and Jenny, along with their children, Stephanie, Rachel and Nathan, run the farm now.

"We are very thankful that we were able to preserve some Pea Ridge history. We thought there might be a distant connection between our family and Martha Ruth Hall's family and discovered that the connection is through the Webb, Patterson and Miller families several generations back. 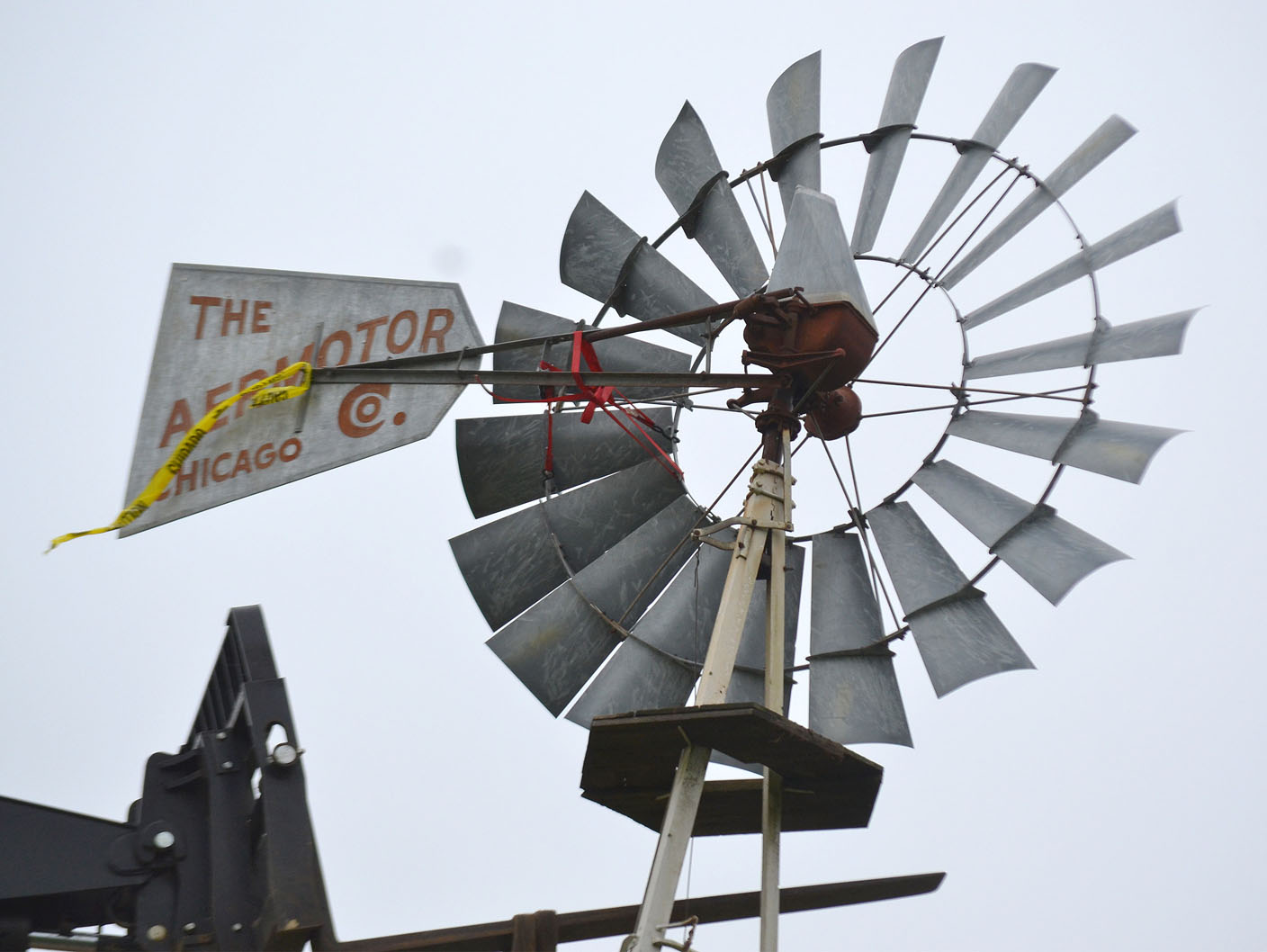 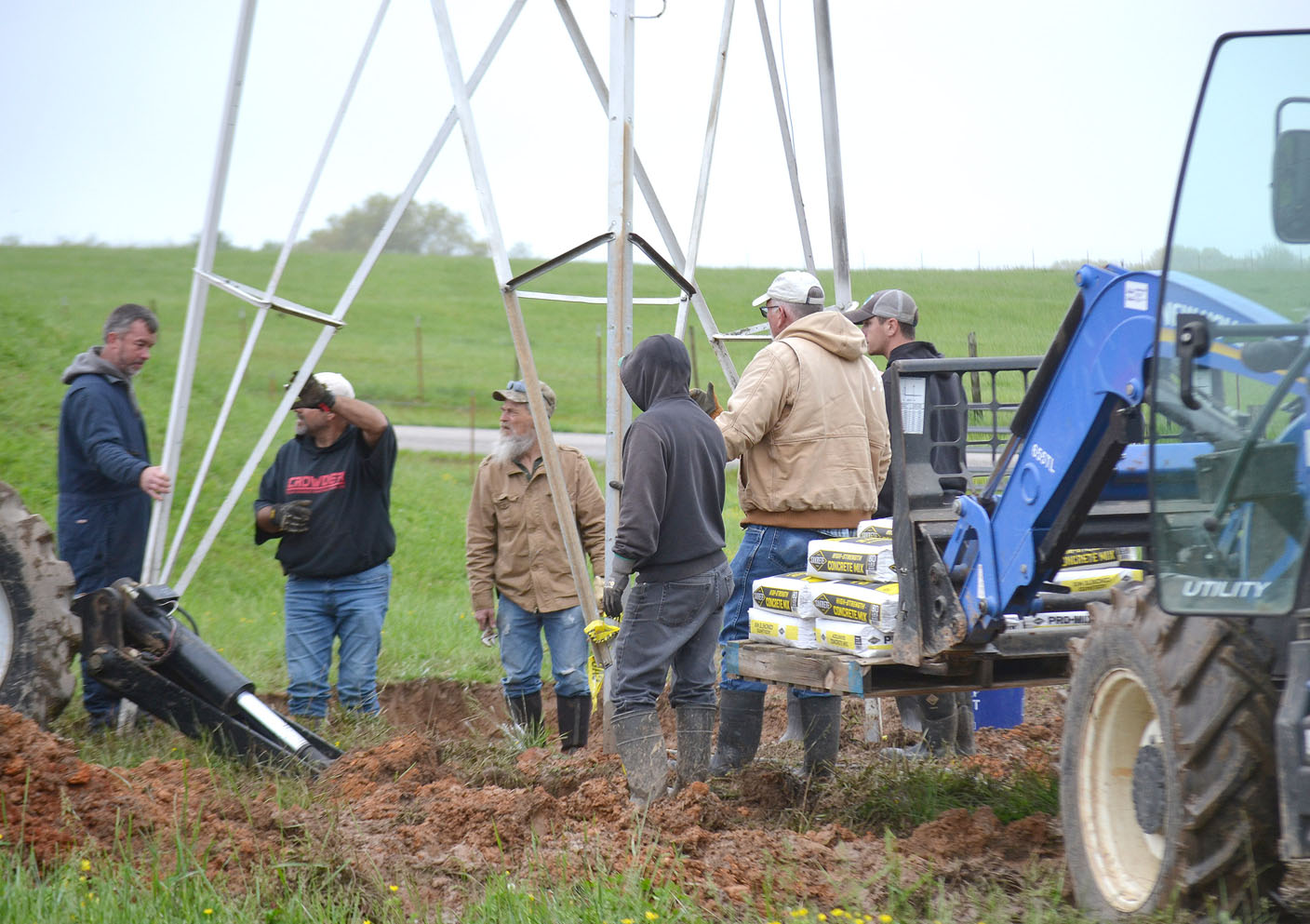