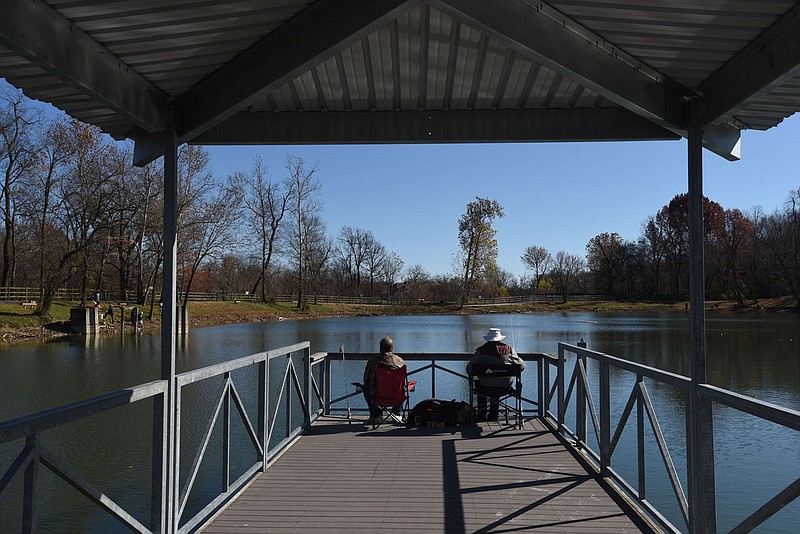 Find out the latest trout stocking information by calling the Arkansas Game and Fish Commission community fishing hotline at 866-540-3474. There’s information for each lake that tells when it was last stocked.

Fishermen 16 and older are required to have an Arkansas fishing license and trout permit. Fishing is allowed with rod and reel only. The daily limit is five trout of any size.

Robinson, of Rogers, has little trouble catching the main ingredient of a five-star trout dinner thanks to the Arkansas Game and Fish Commission program of stocking trout in city ponds and lakes each winter.

On Christmas Day, Robinson and Brittany Rosen stood on the shore and made their first casts at Lake Atalanta east of downtown Rogers.

"We were here two days ago and got our limits in two hours," Robinson said. They hoped the catching would be equally as good this unusually warm Christmas Day.

Game and Fish starts stocking rainbow trout in small urban waterways across Arkansas in mid-November once waters are chilly enough for these cold-water fish to survive. The lakes and ponds are stocked monthly through February.

Anglers 16 and older need an Arkansas fishing license and trout permit. The daily limit is five trout of any size. Average size is about 12 inches, but Game and Fish occasionally stocks some 2- to 3-pound beauties.

Trout were last stocked on Wednesday, Jan. 5, in the region. Larger lakes, such as Lake Atalanta, get more trout than smaller waters such as Murphy Park pond. Rainbow trout are raised at the Jim Hinkle Spring River Hatchery near Mammoth Spring. Some 50,000 trout are stocked around the state each year.

What's the best way to catch some? Anglers were generous with their tips.

Rosen is fond of the gold and red spoon she cast Christmas Day at Lake Atalanta.

"They sparkle good in the sun," she said.

Down the highway at Lake Springdale, Carmen Aguilar fished with her family. "Waxworms or Power Bait," she said while standing on shore. Power Bait is one of the varieties of trout dough bait that gets fish to bite.

Young Melanie Orellana, 9, proudly held up a stringer with a trout she caught on a live worm.

At Lake Springdale, anglers fish from the bank or from a dock in the center of the lake. Joe Hull of Springdale and his dad, also named Joe Hull, relaxed on the dock in folding chairs waiting for a bite.

"With Power Bait they seem to like green," the younger Joe Hull said. Light line is key, he added. Thin line of 4- to 6-pound test is ideal, he said.

Most anglers fish from shore at these trout-filled lakes. Boats aren't allowed on some of the waterways. Lake Atalanta and Lake Bentonville are well suited for fishing from kayaks.

Now, about that gourmet trout recipe. Robinson cuts the trout butterfly style, slicing down the backbone so the fish lays flat. He heats a little white wine and butter in the frying pan and adds a bit of parsley.

He sprinkles some Old Bay seasoning and a smidgeon of white flour on the fish and pan-fries the trout four minutes on each side.

Makes a fisherman wonder what's better, the catching or the eating. 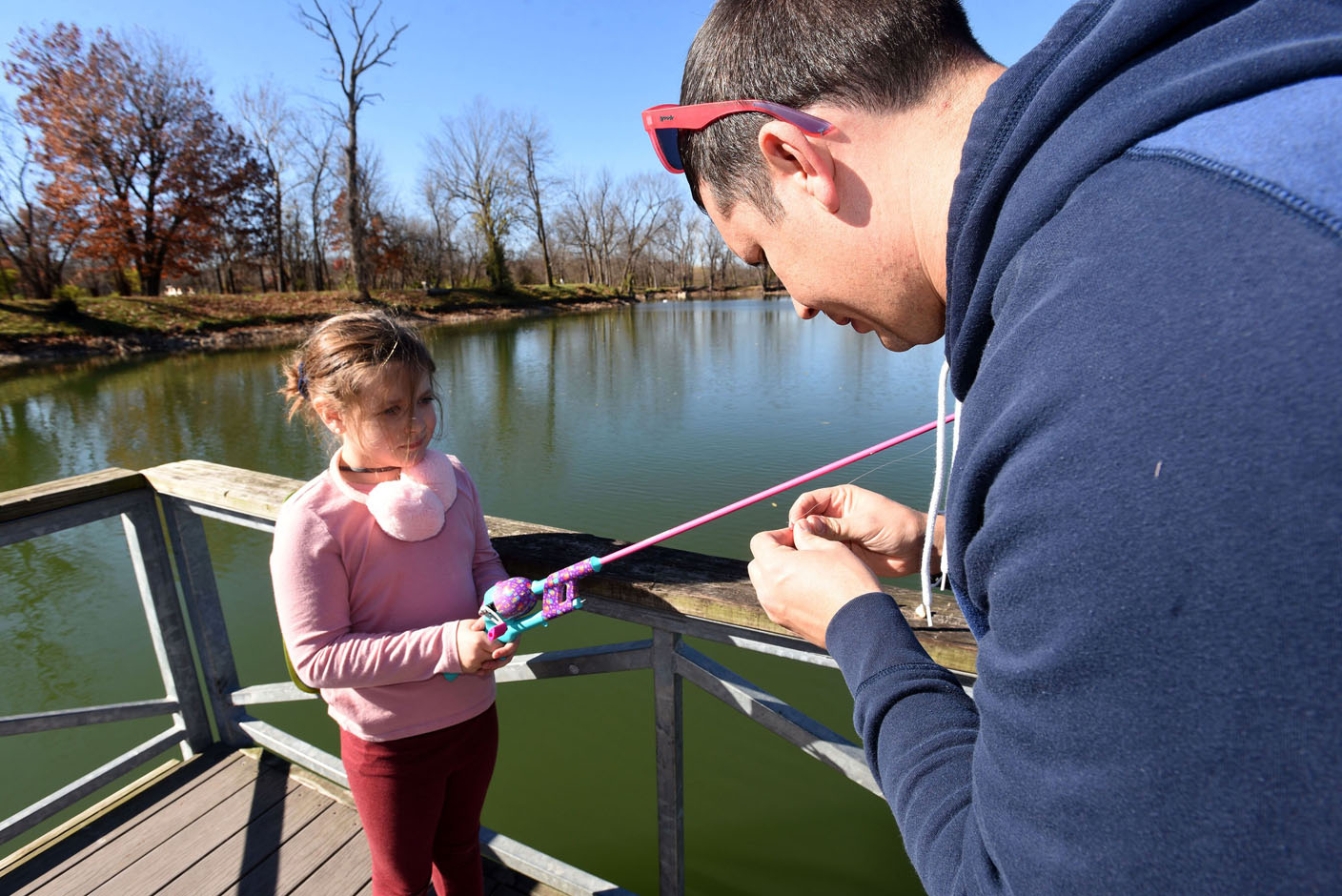 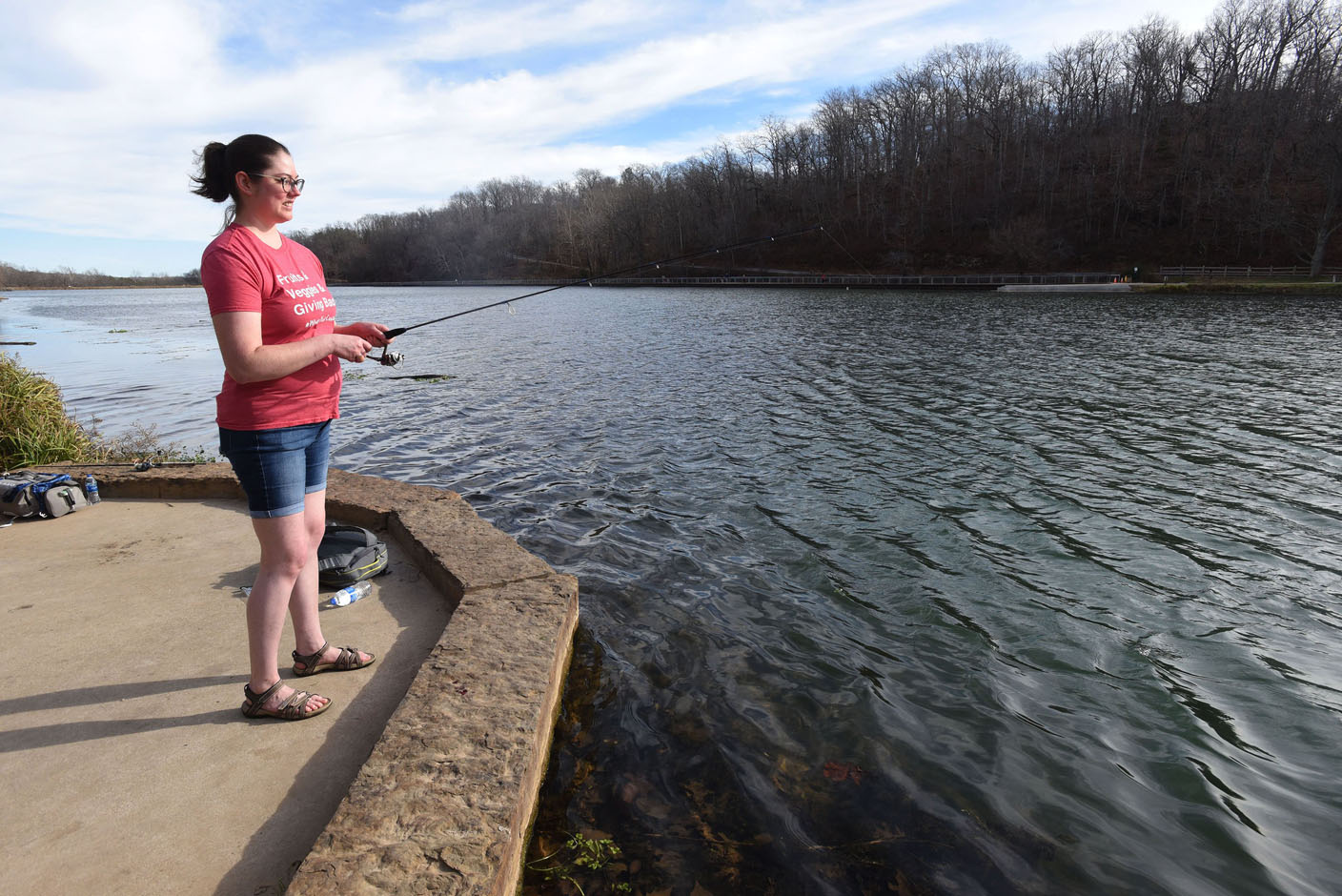 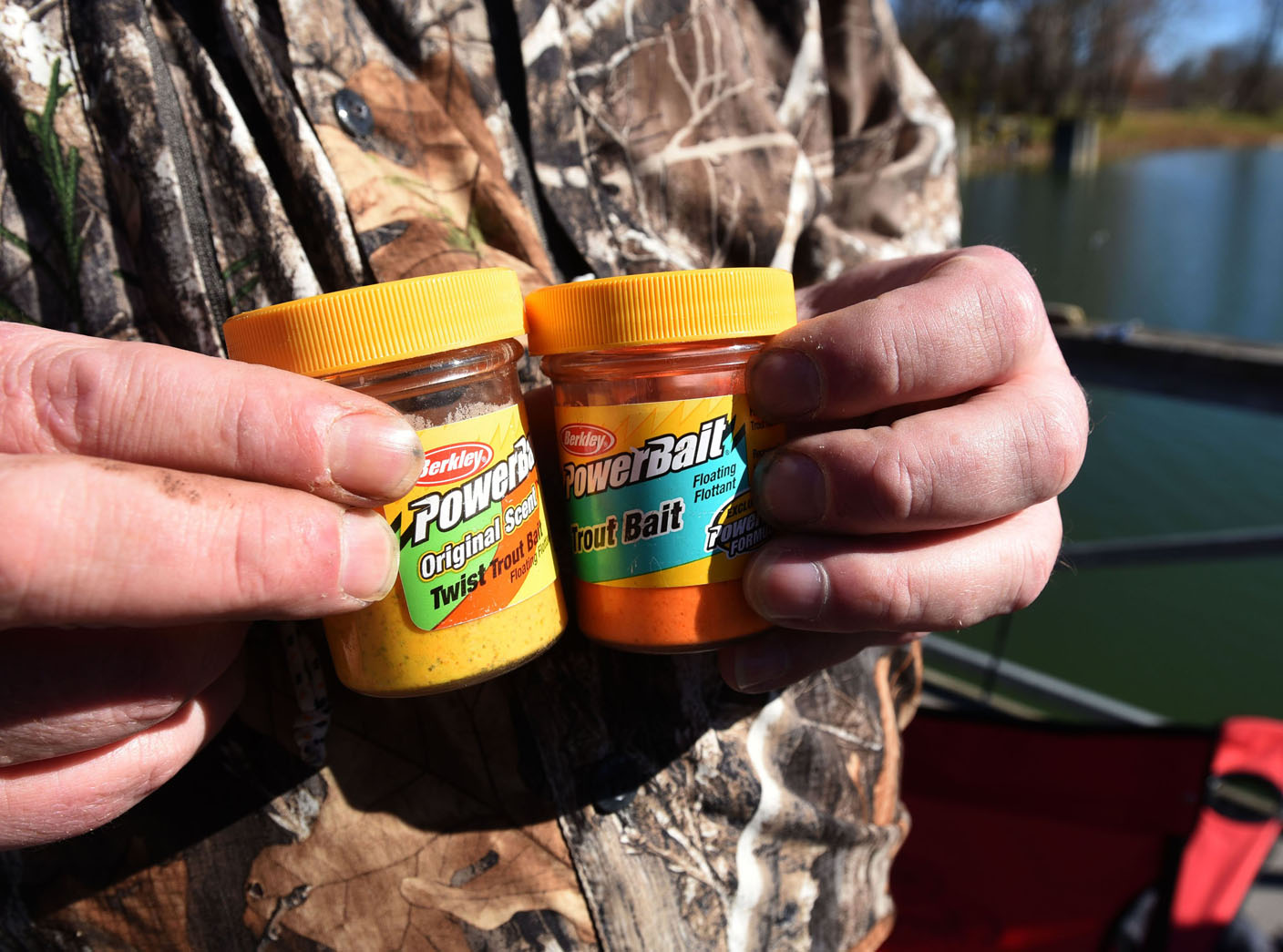 Prepared trout bait, such as Berkley Power Bait, is a favorite among anglers for catching trout. (NWA Democrat-Gazette/Flip Putthoff) 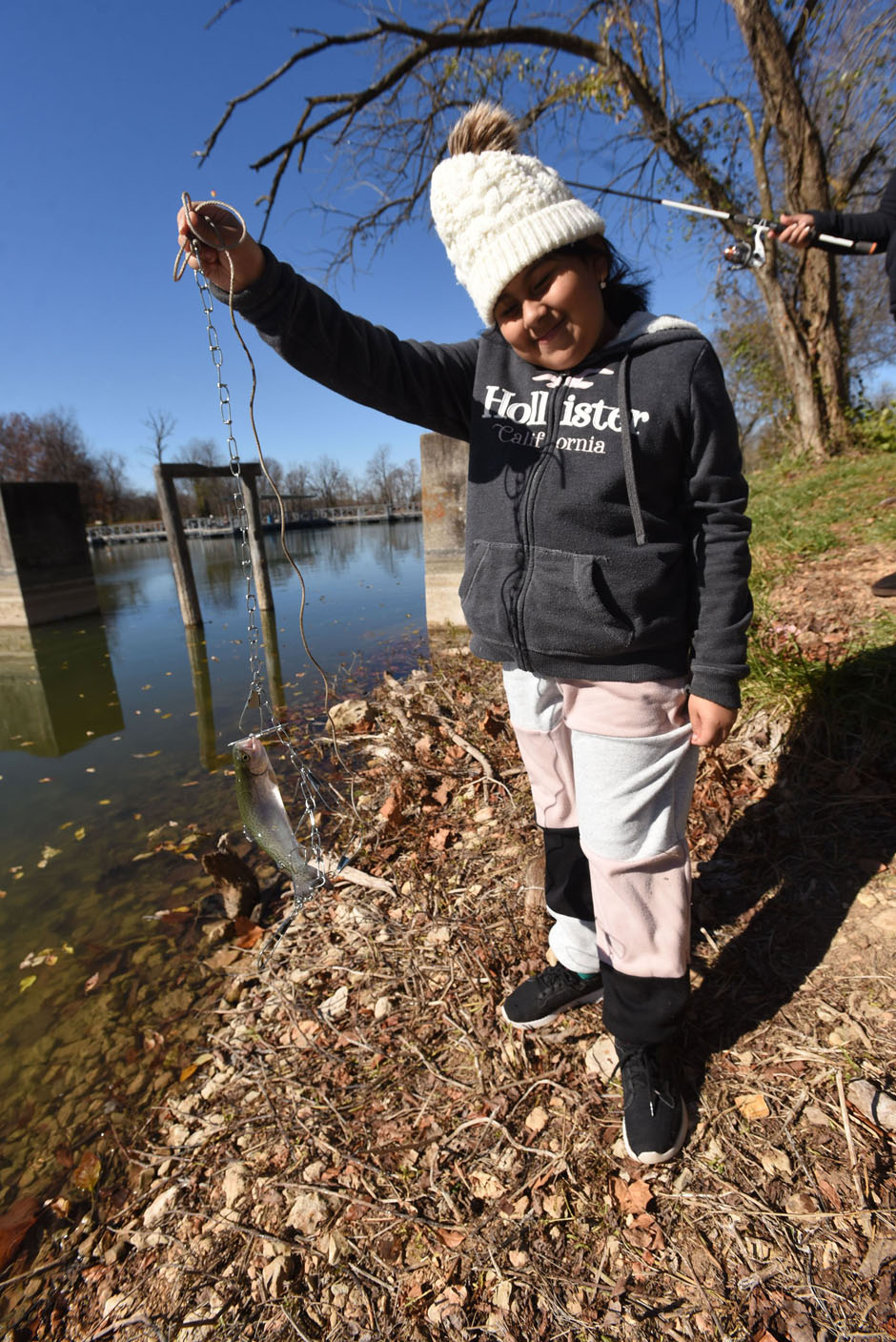 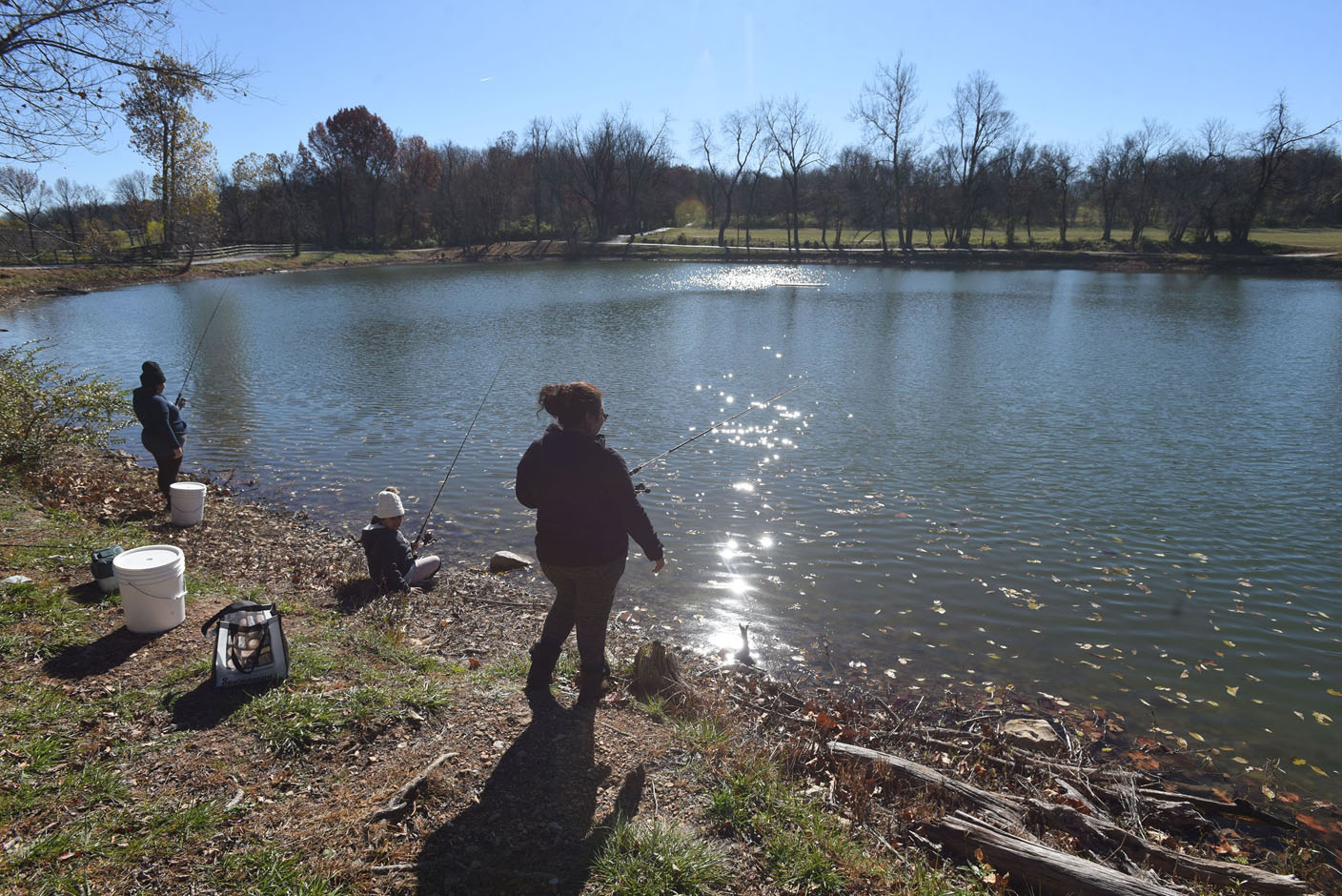 Carmen Aguilar (right) fishes for trout on Nov. 26 2021 with her family at Lake Springdale. Arkansas Game and Fish Commission stocks rainbow trout at the lake and many others around the state for winter fishing. (NWA Democrat-Gazette/Flip Putthoff)
More News