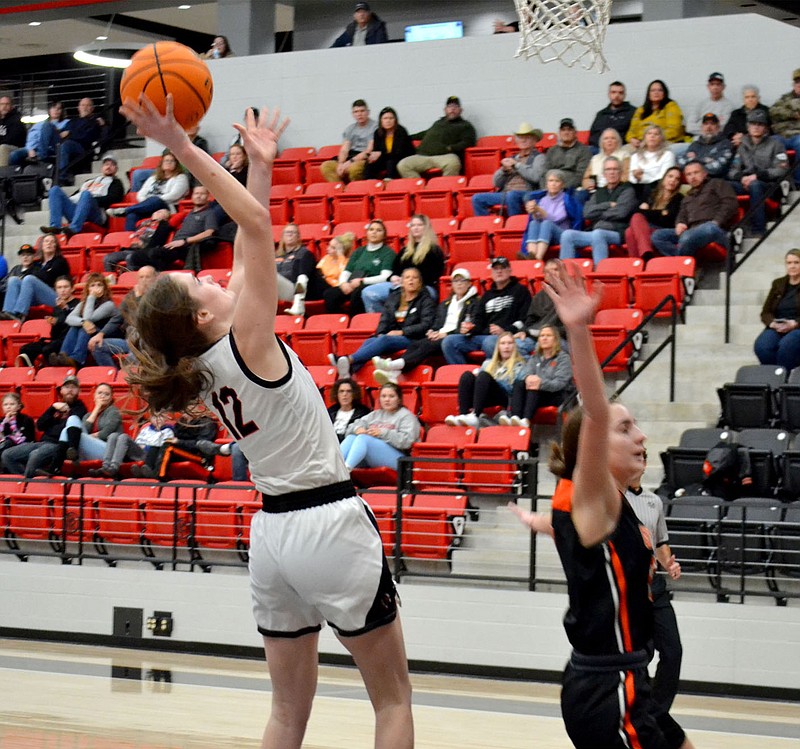 A cold-shooting first quarter dug a hole the Blackhawks just could not dig out of as they lost a 4A-1 district game to the Gravette Lions 54-37 Tuesday, Jan. 4.

The Lady Hawks could only hit one bucket in the first eight minutes, that being a trey shot by Bella Cates. Leah Telgemeier ripped two of two free throws for the only other points the Ridge could muster as Gravette took command of the game from the beginning 12-5.

Heath Neal's Hawks rallied back in the second quarter, getting five players to add points to the scoring column, but the effort only served to whittle the lead down by a point, as Pea Ridge trailed at the break 24-18. Telgemeier hit a pair of free shots while also scoring a goal with Mia Dayberry throwing down a trey. Spears, Wright and Paige Brown each scored two finish out the scoring by scoring a pair.

The third period was another tough scoring period for the Blackhawks as the hosts could not get out of single digit scoring, tallying but 8 points. The guest Lions were busy scoring 13 as they expanded their lead to 37-26 going into the game's final period.

The Hawks had their best quarter offensively in the fourth, but unfortunately, so did the Lions as they outscored Pea Ridge 17-16 to maintain their lead and take the 4A-West contest. This time, six Blackhawk athletes dented the scoreboard with Spears and Wright both contributing double buckets to pace the scoring. Makayla Humphrey added a bucket and ripped a couple of free throws. Spivey tossed in a pair of free shots with Telgemeier and Cates coming up with solo free tosses of their own.

Spears and Telgemeier led the scoring with 8 points each, Cates and Wright tossing in 4 points, with Humprhey getting 4, Dayberry 3. 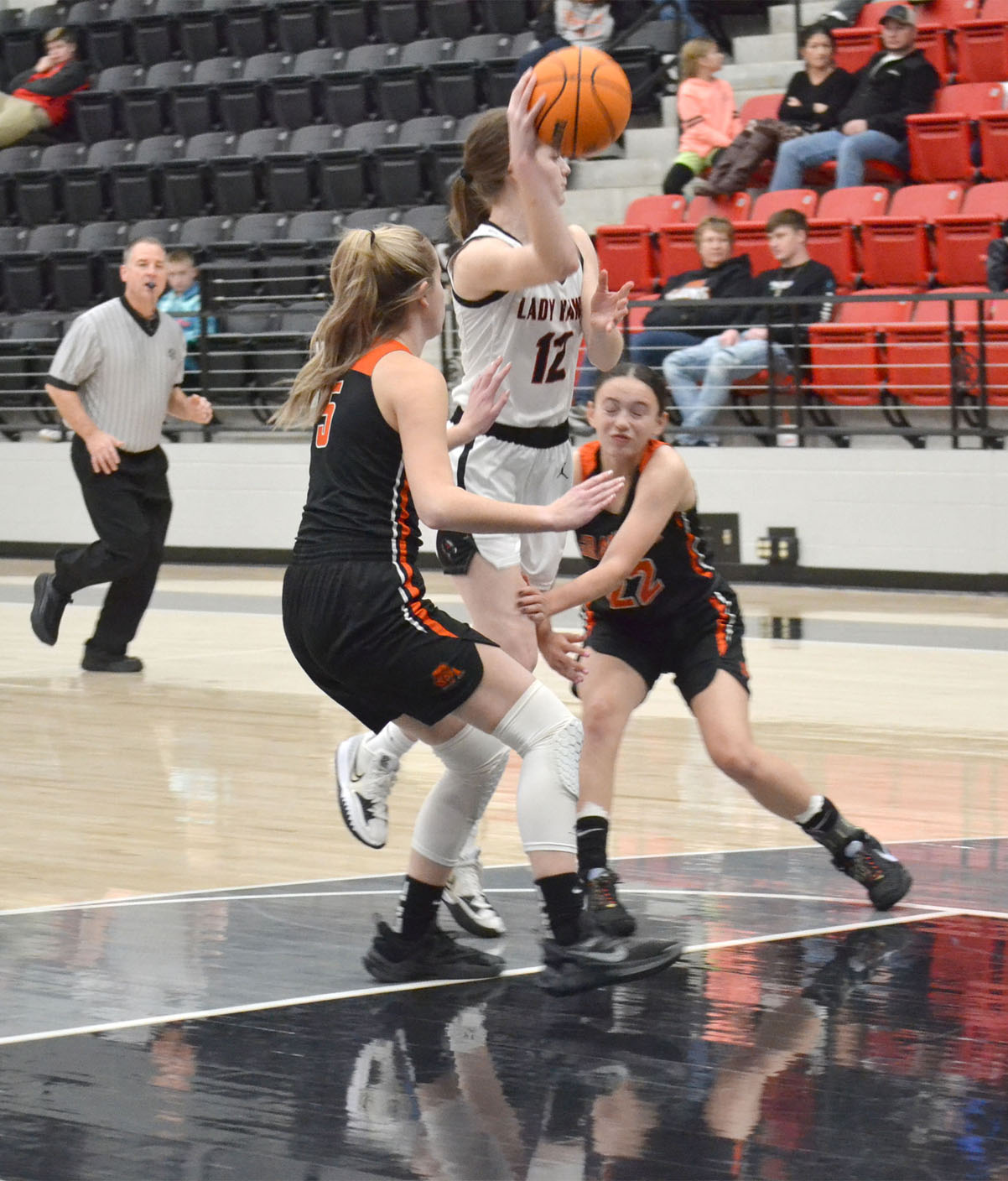 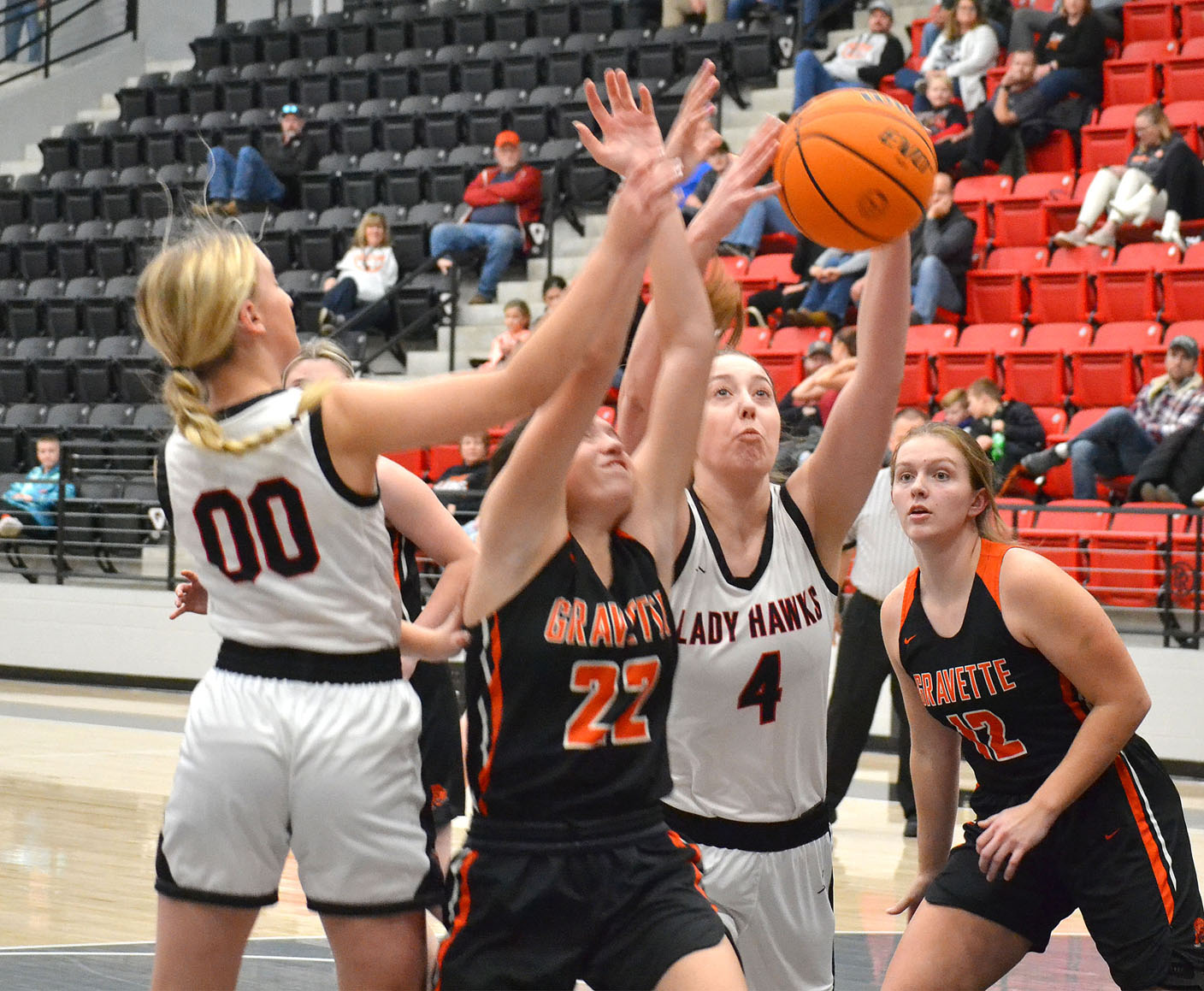 Lady Blackhawks Sydney Spears, No. 4, and Bella Cates, No. 00, battle for the rebound against the Lady Lions Tuesday, Jan. 4. 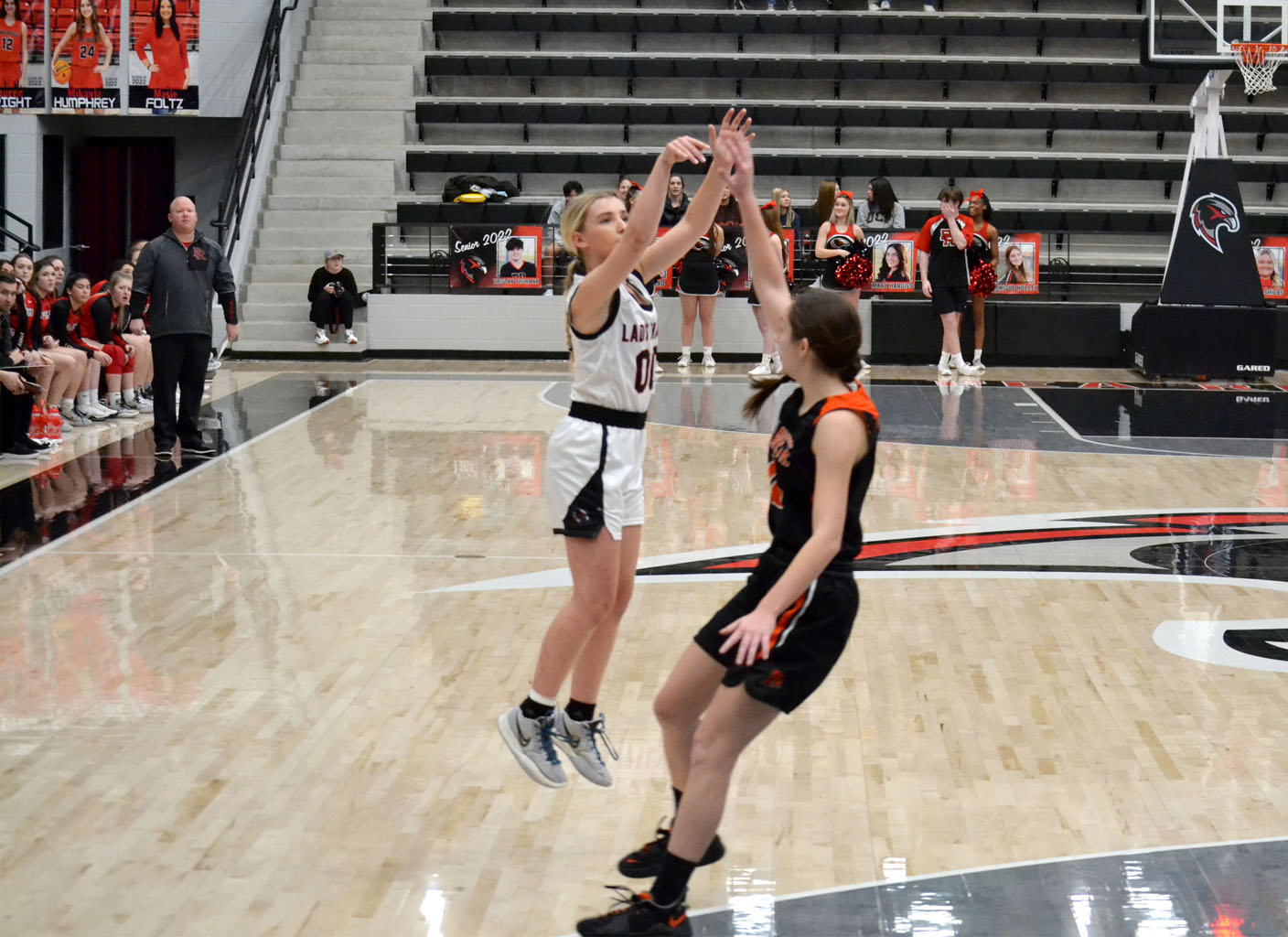 Lady Blackhawk Bella Cates shoots a trey in Blackhawk arena in the home contest against the Lady Lions from Gravette Tuesday, Jan. 4. 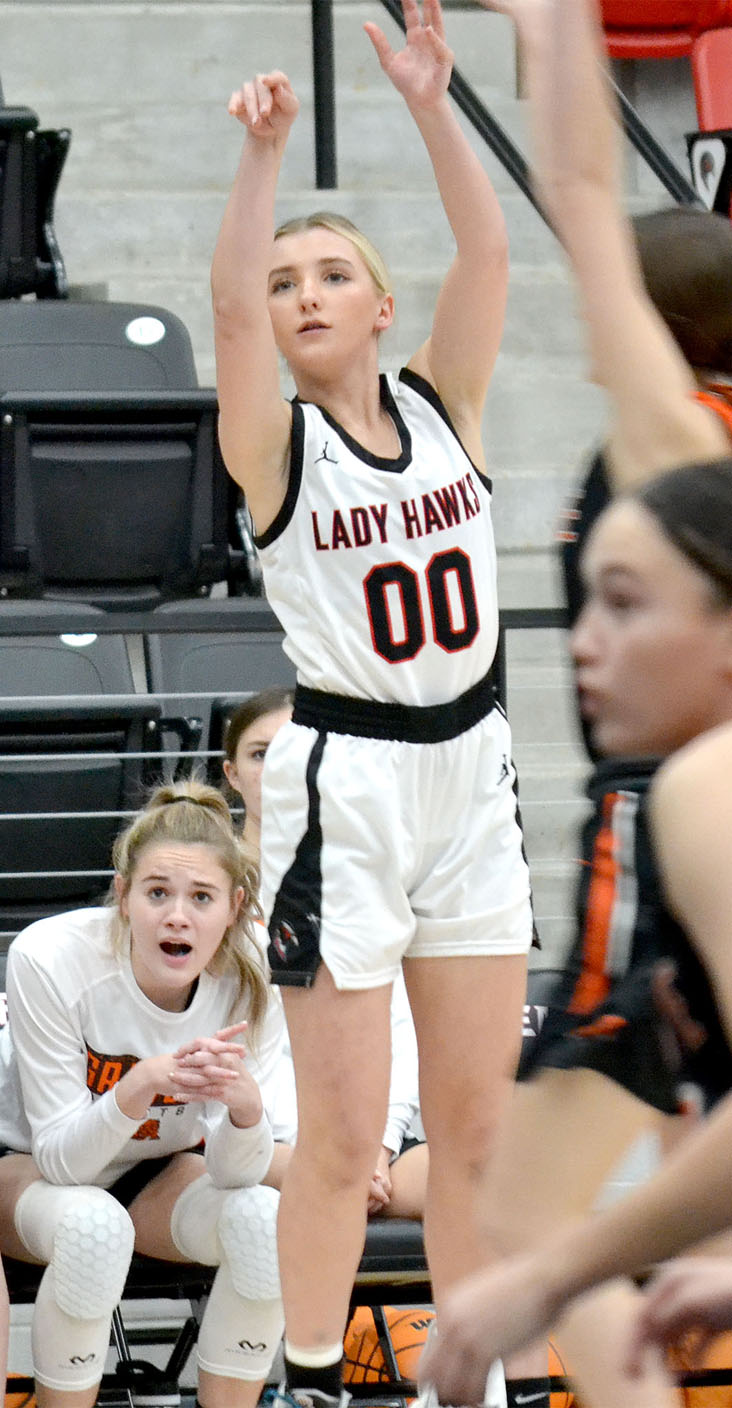 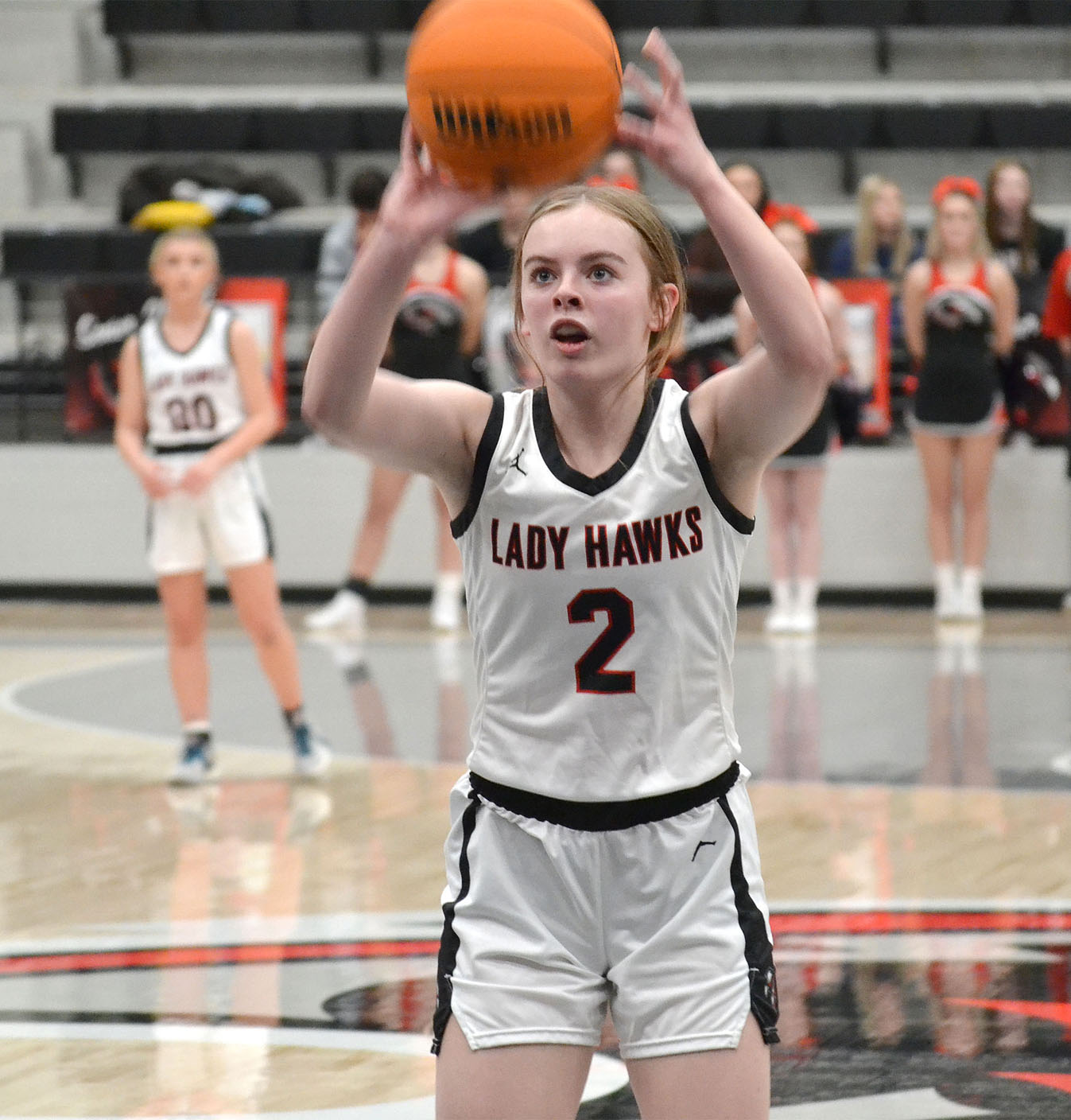 Lady Blackhawk Leah Telgemeier focuses on shooting a free throw during the Tuesday, Jan. 4, game against the Lady Lions from Gravette. Telgemeier and teammate Sydney Spears led the scoring with 8 points each.