RELIGION: ‘I bring you good tidings of great joy, which shall be to all people’ 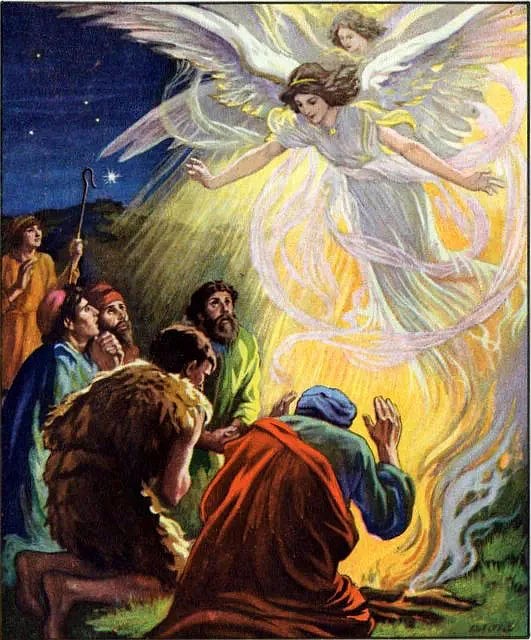 An angel brings good tidings to the shepherds near Bethlehem. Standard Bible Story, Book Two, Illustration by O. A. Stemler and Bess Bruce Cleaveland, published by The Standard Publishing Company, 1925.

"And there were in the same country shepherds abiding in the field, keeping watch over their flock by night. And, lo, the angel of the Lord came upon them, and the glory of the Lord shone round about them: and they were sore afraid. And the angel said unto them, Fear not: for, behold, I bring you good tidings of great joy, which shall be to all people. For unto you is born this day in the city of David a Saviour, which is Christ the Lord. And this shall be a sign unto you; Ye shall find the babe wrapped in swaddling clothes, lying in a manger. And suddenly there was with the angel a multitude of the heavenly host praising God, and saying, Glory to God in the highest, and on earth peace, good will toward men. And it came to pass, as the angels were gone away from them into heaven, the shepherds said one to another, Let us now go even unto Bethlehem, and see this thing which is come to pass, which the Lord hath made known unto us. And they came with haste, and found Mary, and Joseph, and the babe lying in a manger. And when they had seen it, they made known abroad the saying which was told them concerning this child. And all they that heard it wondered at those things which were told them by the shepherds. But Mary kept all these things, and pondered them in her heart. And the shepherds returned, glorifying and praising God for all the things that they had heard and seen, as it was told unto them." Luke 2:8-20

When Jesus the Messiah was born and laid in a manger, an angel announced His birth to shepherds staying in a field nearby and keeping watch over their flock by night. The heavenly messenger brought them good tidings of great joy not just for them but for all people; for that very day in Bethlehem, the city of David, a Savior was born, the Messiah, the LORD (Jehovah) Himself in human flesh.

And, as the angel choir said in its hymn of praise, this child brought peace between God and men and God's goodwill toward sinful mankind.

How could this be? Jesus Christ satisfied the righteous demands of God's holy law for us, keeping all God's commandments perfectly and without sin in His thoughts, desires, words and deeds. And He suffered and died on the cross in our stead and paid in full the just punishment for the sins of all that God might have mercy upon us and graciously forgive our sins when we look to His Son in faith for pardon and peace!

Having heard this joyful news, the shepherds were not content to go back to their work of guarding the flock; they went to see the things of which the angel had told them. And they found it just as the angel had said. They found Mary and Joseph and, with them, the Christ Child lying in a manger.

Nor did the shepherds keep the good news to themselves; they told everyone -- they made known abroad -- what the angel had told them concerning this Child born in Bethlehem.

Mary herself treasured the words of the shepherds concerning her Son and pondered them in her heart.

And, when the shepherds returned to their flock, they were glorifying and praising God for all they had seen and heard, which was just as the angel had told them. They were rejoicing in God's gift of a Savior who would redeem them and give them a place in God's eternal kingdom.

Of course, these events in history have great significance for each and every one of us today. God's own dear Son was born in Bethlehem on that historic day. His birth is good tidings of great joy to us as well, for He is the long-promised Messiah, the LORD God Himself, and He went to the cross for the sins of the world -- for the sins of each of us -- and He rose again in victory, that each and every one of us might have forgiveness for all our sins and life eternal through faith in Him!

God would have us heed the message of the Christmas Gospel and turn from our sinful ways to Christ Jesus in faith that we might receive the pardon and forgiveness He won for us by coming into this world as a babe wrapped in swaddling clothes and lying in a manger at Bethlehem, and then fulfilling all the demands of God's commandments for us and making full atonement on the cross for our sins!

Dearest Jesus, we thank You for coming into this world a true man -- that babe born in Bethlehem -- and going to the cross to redeem us and make us Your own. Move us to take the time to see, to believe, to worship, and to spread abroad the good news of salvation through faith in Your name. Amen.

Editor's note: Scripture is quoted from the King James Version of the Bible. Devotion is by Randy Moll. He may be contacted by email at [email protected] More of Moll's devotional writings are freely available at https://goodshepherdonline.org. Opinions expressed are those of the author.

Print Headline: ‘I bring you good tidings of great joy, which shall be to all people’