RELIGION: Where can we find the Christ Child? 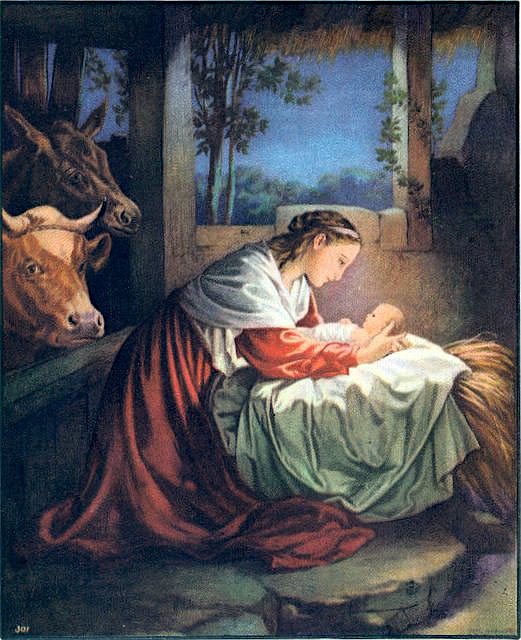 "And it came to pass in those days, that there went out a decree from Caesar Augustus, that all the world should be taxed. (And this taxing was first made when Cyrenius was governor of Syria.) And all went to be taxed, every one into his own city. And Joseph also went up from Galilee, out of the city of Nazareth, into Judaea, unto the city of David, which is called Bethlehem; (because he was of the house and lineage of David:) to be taxed with Mary his espoused wife, being great with child. And so it was, that, while they were there, the days were accomplished that she should be delivered. And she brought forth her firstborn son, and wrapped him in swaddling clothes, and laid him in a manger; because there was no room for them in the inn." Luke 2:1-7

Far more than a quaint story, these verses from Luke, chapter two, describe a historical event that occurred at a real time in history and in a real place in this world. It was the fulfillment of all those ancient prophecies that promised the Seed of the woman who would crush the head of the serpent and the one who would redeem His people from their sins (Gen. 3:15; Ps. 130:7-8).

“But when the fulness of the time was come, God sent forth his Son, made of a woman, made under the law, to redeem them that were under the law, that we might receive the adoption of sons” (Gal. 4:4-5).

It happened in the days of the Roman emperor, Caesar Augustus. Cyrenius was the governor of Syria.

Though Joseph and Mary lived in Nazareth, the Prophet Micah (approximately 700 years before Christ) foretold the birthplace of Messiah to be in Bethlehem: “But thou, Bethlehem Ephratah, though thou be little among the thousands of Judah, yet out of thee shall he come forth unto me that is to be ruler in Israel; whose goings forth have been from of old, from everlasting” (Micah 5:2).

And God, in His divine providence, moved Caesar Augustus to take a census at just the right time, making it necessary for Joseph and his espoused wife, who lived in Nazareth (some 90 miles to the north), to be in Bethlehem when the days were fulfilled for Mary to bring forth her firstborn son “because he [Joseph] was of the house and lineage of David.” The genealogies of Joseph in Matthew 1 and Mary in Luke 3 show that both were of the “house and lineage of David.”

While we often have pictures in our heads of Jesus being born on that first night after Mary and Joseph arrived in Bethlehem, that’s not really what the Scriptures say. Verse 6 of Luke 2 says: “And so it was, that, while they were there, the days were accomplished that she should be delivered.” They could have been there a few days, a few weeks or even a month or more — the Bible doesn’t say. But it does say that, while they were there, the day came for her to give birth.

“She brought forth her firstborn son” while there in the crowded city of Bethlehem — there were many descendants of David who also had to register in Bethlehem. It’s there that Jesus was born.

As we read, Mary “brought forth her firstborn son, and wrapped him in swaddling clothes, and laid him in a manger; because there was no room for them in the inn.” Notice that no mention is made of a donkey on which Mary supposedly rode or of a barn or stable in which Jesus supposedly was born (not even of a cave or shelter), just a manger in which Jesus was laid.

The eternal Son of God, the Creator of heaven and earth and all things (cf. John 1:1-5, 14), humbled Himself and was born a man of lowly birth. Instead of being born in a king’s palace and clothed in royal garments, He was wrapped in swaddling clothes and laid in a manger (a feeding trough).

“Christ Jesus … being in the form of God, thought it not robbery to be equal with God: but made himself of no reputation, and took upon him the form of a servant, and was made in the likeness of men: and being found in fashion as a man, he humbled himself, and became obedient unto death, even the death of the cross” (Phil. 2:5-8).

“Forasmuch then as the children are partakers of flesh and blood, he also himself likewise took part of the same; that through death he might destroy him that had the power of death, that is, the devil; and deliver them who through fear of death were all their lifetime subject to bondage. For verily he took not on him the nature of angels; but he took on him the seed of Abraham. Wherefore in all things it behoved him to be made like unto his brethren, that he might be a merciful and faithful high priest in things pertaining to God, to make reconciliation for the sins of the people” (Heb. 2:14-17).

And much like the night of Jesus’ birth, Jesus is still relegated to the mangers of this world. The inn is full and there is no room for the Messiah and Savior of the world. Jesus is crowded out — even crowded out of the celebration of His birth!

Therefore, if we wish to find Jesus, we are not likely to find Him in the biggest and best churches and cathedrals of this world. The place to look for and find Him is where God’s humble means of grace are in use, where the Word of God is preached in its simple truth and purity and people are confronted with their sins and the judgment of God upon them but also comforted with the Gospel of pardon and forgiveness through faith in Christ Jesus and His atoning sacrifice on the cross, where people are joined to Christ and become His covenant people through the waters of Baptism and where believers are comforted in Holy Communion through partaking of the body and blood of the Lamb of God who gave Himself as the atoning sacrifice for the sins of the world.

Indeed, the day could come when we may need to worship in barns and stables, or outside in the elements, to hear and learn of the true Christ who came into this world to redeem us because there is no room for God’s Christ or for God’s people in the inn. It’s happened before.

What’s the point of this message for you and for me?

Though the world was not awaiting the coming of Christ Jesus with open arms, and though God’s own people (members of the outward and visible church in this world) were too busy to welcome Him, God kept His ancient promises to send the Savior. God’s only-begotten Son took on human flesh and blood and was born a true man of the Virgin Mary so that he might pay the price for our sins and redeem us. He came humbly, wrapped in swaddling clothes and laid in a manger, that He might fulfill God’s plan and go to the cross as our sacrifice for sin.

And where do we find Him?

Where the Word of God is preached in its truth and purity and where the Sacraments are administered in accord with Christ’s institution. There we will find and learn of the Christ who died for our sins and redeemed us. There we will be comforted with the forgiveness of our sins and the eternal salvation He won for us.

O gracious and merciful Father, we thank Thee for the gift of Thy dear Son and His humble birth as a true man that He might redeem us from our sins and grant unto us pardon, peace and life everlasting through faith in His name. By Thy Holy Spirit, open up our hearts and minds to the truth taught us in Thy Word and grant us faith to look to Christ Jesus as our Savior and to receive the eternal blessings He won for us by His innocent sufferings and death on the cross for the sins of the world. In His name, we pray. Amen.

[Scripture is quoted from the King James Version of the Bible. Devotion is by Randy Moll. He may be contacted by email at [email protected] More of Moll's devotional writings are freely available at https://goodshepherdonline.org. Opinions expressed are those of the author.]

Print Headline: Where can we find the Christ Child?