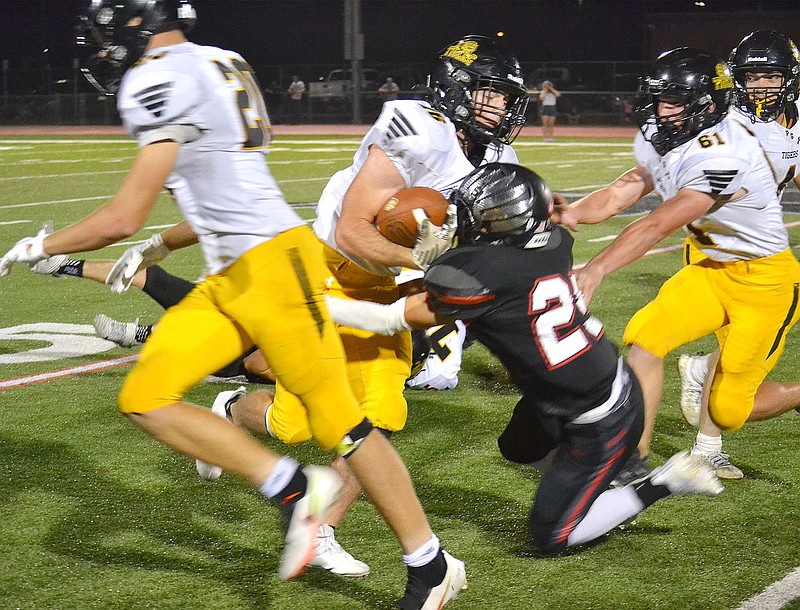 The Blackhawks' improving offense, handicapped by a depleted defensive unit, made a run at upsetting favored Prairie Grove before falling 41-28 in a non-conference battle.

A costly turnover just before the half vaulted the Tigers to a 14-12 half-time lead. A turnover on the Hawks' first possession in the second half followed by a penalty helped push the Tigers further ahead 20-12. Then after falling behind 27-12 late in the third quarter, Pea Ridge rallied to within 6 at 34-28 midway in the fourth period before a late score by the guests iced the contest.

Pea Ridge was without the services of several key defensive players due to covid protocols, but a determined team effort gave them a chance with several outstanding performances on both sides of the ball. Sophomore quarterback Gavin Dixon (No. 15) led the offense with 20 of 32 passing accuracy for 268 yards unofficially, throwing for three touchdowns while opening the scoring on an 11-yard run.

Senior four-year starter Trevor Blair (No. 8) hauled in 12 passes for 215 yards and three touchdowns while senior Will Anderson (No. 11) was taking four for 30 yards, with sophomore Caden Thompson (No. 10) catching two for 21 yards. Blair was also a defensive weapon via the punt as he punted three times for a whopping 52-yard average.

Senior Joe Adams (No. 2), in his first game of the 2021 season, led the ground attack as he reeled off 107 yards on just nine carries. Sophomore Seth Foster (No. 28) picked up 10 yards on six runs up the middle.

The first quarter belonged to the Hawks as they scored first and ended the quarter with a 12-7 lead. Pea Ridge out gained the visitors 149 to 64 in the period and the home crowd was sensing upset.

Adams opened the game with a short run against an always tough Tiger defensive line, and the Hawks' initial first down was gained through the air on a 14-yard pass from Dixon to Blair to the Hawk 32. Adams gained three on a rush with another first down gained on a 7-yarder from Dixon to Anderson. An 8-yard pass to sophomore Bowen Phillips (No. 41) set up a fourth and 2 with a subsequent pass to Blair netting 15 yards, with the senior star catching the tipped pass in traffic to the Tiger 21.

After a 4-yard rush by Adams, Dixon flipped a pass to Blair in the right flat, who then ducked and spun away from would be tacklers until he gained a first down on the Tiger 9, 8 yards downfield. The next two plays lost yards to the Tiger 11, where Dixon went back to pass, then dashed straight up the middle to paydirt for a 6-0 lead with 4:17 left in the first quarter.

A good kick return by the Tigers got the ball to near midfield at the Tiger 45. A 28-yard pass was followed by a 28-yard rush and a score with the successful PAT giving the guests a 7-6 lead with 3:36 showing.

The sudden misfortune didn't deter the Hawks as they launched another scoring drive, set up by a 58-yard run by Adams on the series' first play, to set the Hawks up on the Tiger 22. Foster bashed the middle for 3 yards, then gained 5 more on an offside call against the Tigers. Short runs by Dixon and Foster gave the Hawks another first down on the Tiger 12, where Dixon lofted a pass to Blair in traffic with the senior receiver hauling in it in the right corner for a touchdown. The score gave the lead back to Pea Ridge at 12-7 with 1:15 remaining in the first period.

The Tigers responded by marching into Hawk territory in seven plays and might have scored. Facing third and 10 from the Hawk 26, the Tiger quarterback threw a perfect pass into the corner of the end zone but Tiger Austin James pulled off perhaps the defensive play of the game when he reached in to bat the pass away at the last second. A fourth down incomplete pass ended the threat.

The Hawks could only gain 5 yards on their next series, and were forced to punt from their own 31. Blair flipped the field, booming a 58-yard punt to pin the Tigers back to their own 11. From there, the guests moved the ball across midfield, but an improving defensive line stood up the ball carrier, and the fierce pursuit knocked the ball loose with the Hawks covering on their own 38.

The Hawks nearly made a first down but a penalty wiped out a good run by Caden Thompson. It led to another punt, and Blair responded again, crushing a 50-yarder to push the Tigers back to their own 26 with 2:59 left in the half.

With the Hawk defense swarming the Tigers, two completed passes netted but 8 yards, and the Hawks got the ball back on their own 44. On second down, Adams nearly broke free, but did manage to pick up 23 yards to the Tiger 33 with less than a minute left in the half.

Hoping to double their lead at the half, the Hawks went to the air on second and 9 from the Tiger 32. With a receiver open on the east sidelines near the Tiger 20, a pass was thrown but an alert defensive back raced in to intercept the ball and dash down the sidelines the other way to score, giving the visitors a 14-12 lead at intermission.

Prairie Grove had the ball to start the second half, but the fired up Hawks kept them on their side of the field, forcing a fourth down after a 21-yard loss on a quarterback sack. A Tiger punt gave the Hawks possession on the Pea Ridge 34.

Blair ran for six yards on first down, but the next play was a pass which was intercepted at the Tiger 38. An 11-yard pass along with a 15-yard penalty against Pea Ridge moved the ball to the Hawk 36. Three plays later from the 27, The Tigers completed a scoring pass to increase their lead to 20-12 with 6:49 to go in the third.

Pea Ridge started their next drive from their own 18, and a quarterback sack on third down forced a punt. A 48-yarder by Blair pushed the ball back across midfield, but a great run back by the Tigers set them up first down on the Hawk 41. The Hawks fought fiercely, forcing the guests into a fourth and 7 from the 38. A rushing play gave the Tigers just enough yardage to keep the drive alive. Two plays later from the 25, a Tiger back swept left, dodging Hawk tacklers and maneuvered into the end zone to balloon the lead to 27-12 with 1:38 left in the third period.

Runs by Adams, Foster and Dixon plus an 11-yard pass from Dixon to Anderson fed a drive that moved the ball to the Tiger 30 by the end of the third quarter.

The first play of the fourth saw Blair catch a Dixon pass at the 23, and on the next play, Dixon threw into the end zone where Blair fought off three defenders to grab the pass for the Hawks' third score. With 11:25 showing on the clock, Dixon tossed the 2-point conversion pass to Blair, shrinking the Tiger lead to 28-20.

The Hawks' euphoria was short lived as a great kickoff return brought the ball to the Tiger 49 with the guests scoring on the very next play to rebuild their lead, holding a 34-20 advantage with 11:16 on the clock.

A good kickoff return was wiped out by a penalty with the Hawks starting their drive from their own 25. A 6-yard pass to Anderson and then a 4-yarder to sophomore Austin James (No. 80) earned a first down on the 35. Thompson picked up 2 yards on a run, which was followed by a 24-yarder to Blair. Dixon's pocket collapsed, but the slippery quarterback rolled out, slipped tacklers enough to get the pass off, good for a first down on the Tiger 39. A 3-yard loss was followed up with a 42-yard touchdown pass from Dixon to Blair with 7:53 left in the game. A successful 2-point pass from Dixon to Blair shaved the deficit to just six at 34-28.

The Tigers decided to keep it on the ground to burn the clock, launching an eight-play drive to score again, effectively icing the contest with a 41-28 lead with only 3:42 left in the game.

The Hawks had to start from their own 14 after the kickoff, but had initial success with a 10-yard pass to Thompson. Disaster struck on the next play with another turnover. However, the Hawk defense swarmed the Tiger ball carrier on their third play, knocking the ball loose on the Hawk 20.

With only 1:26 left, the Hawks took to the air, with Dixon passes of 14, 10 and 36 yards to Blair moving the ball quickly downfield, gaining a first down on the Tiger 21. A pass to Thompson took the ball to the 11-yard line, but a penalty moved it back to the 36. With time running out, a pass was thrown to Blair in the west corner of the end zone, but the tight coverage by Prairie Grove helped them take the interception, ending the Hawks' last scoring chance.

The Hawks will be on the road this Friday to take on the 6A Siloam Springs Panthers. 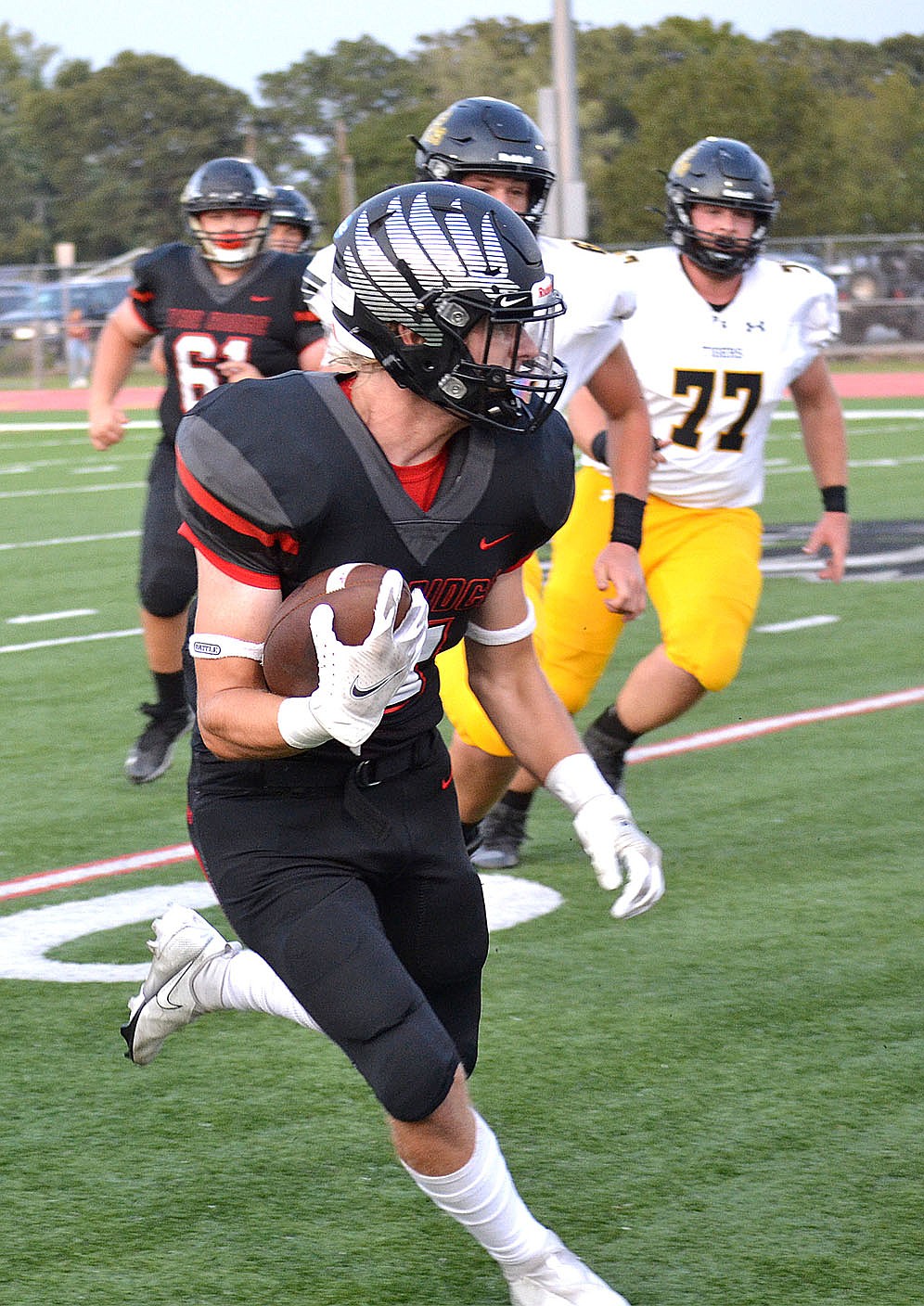 Senior wide receiver Will Anderson, No. 11, maintains a tight grasp on the football while making his way towards the end zone Friday, Sept. 10, 2021. 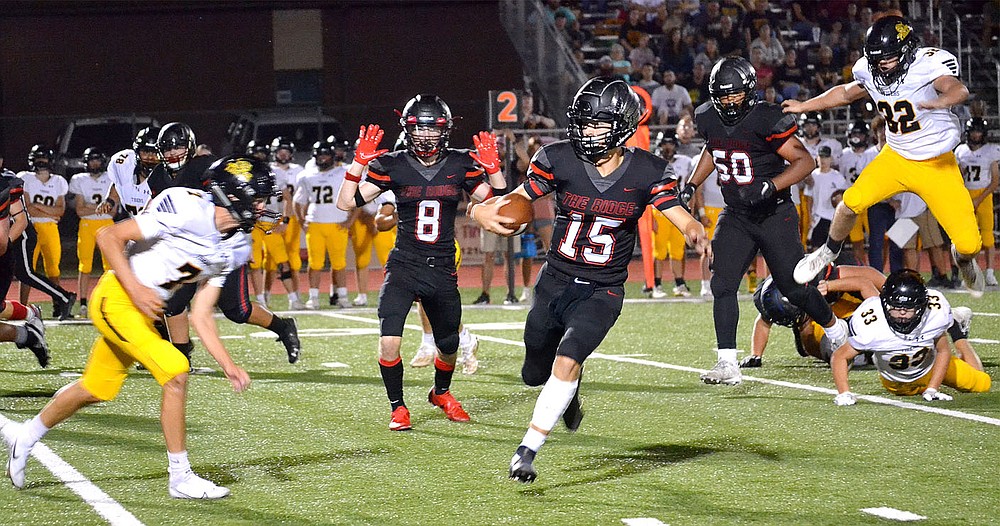 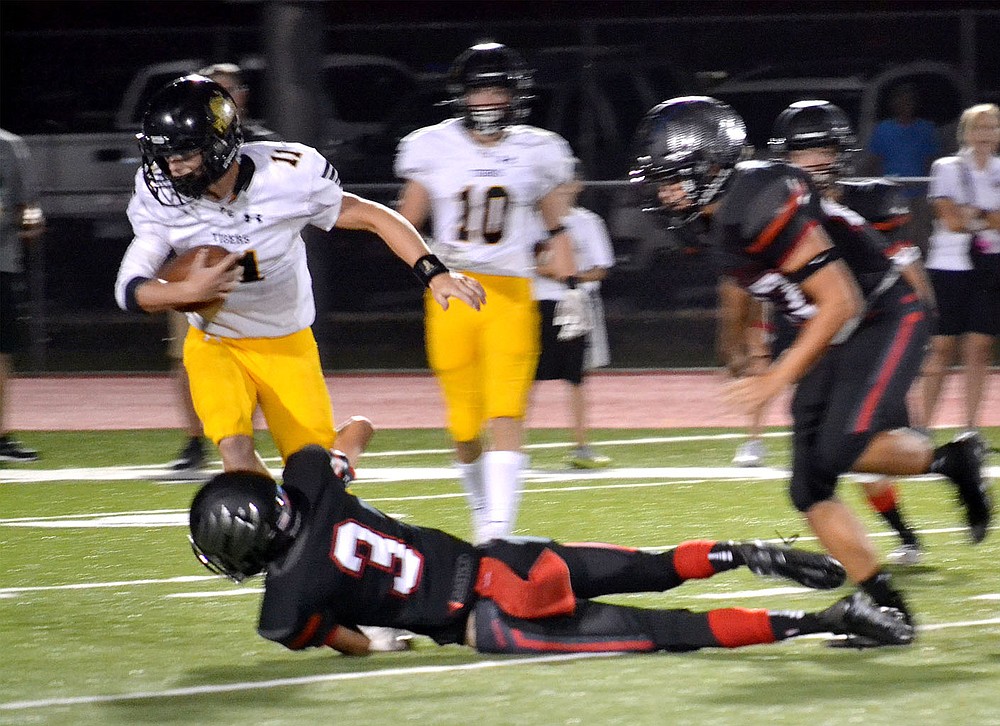 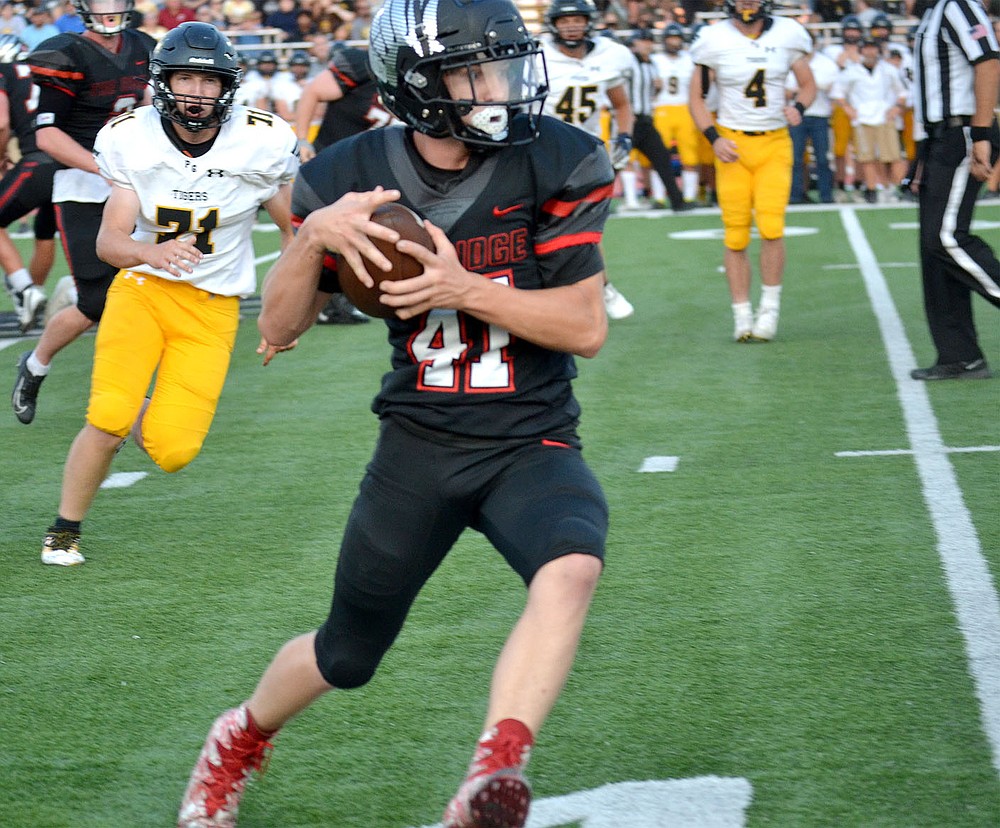 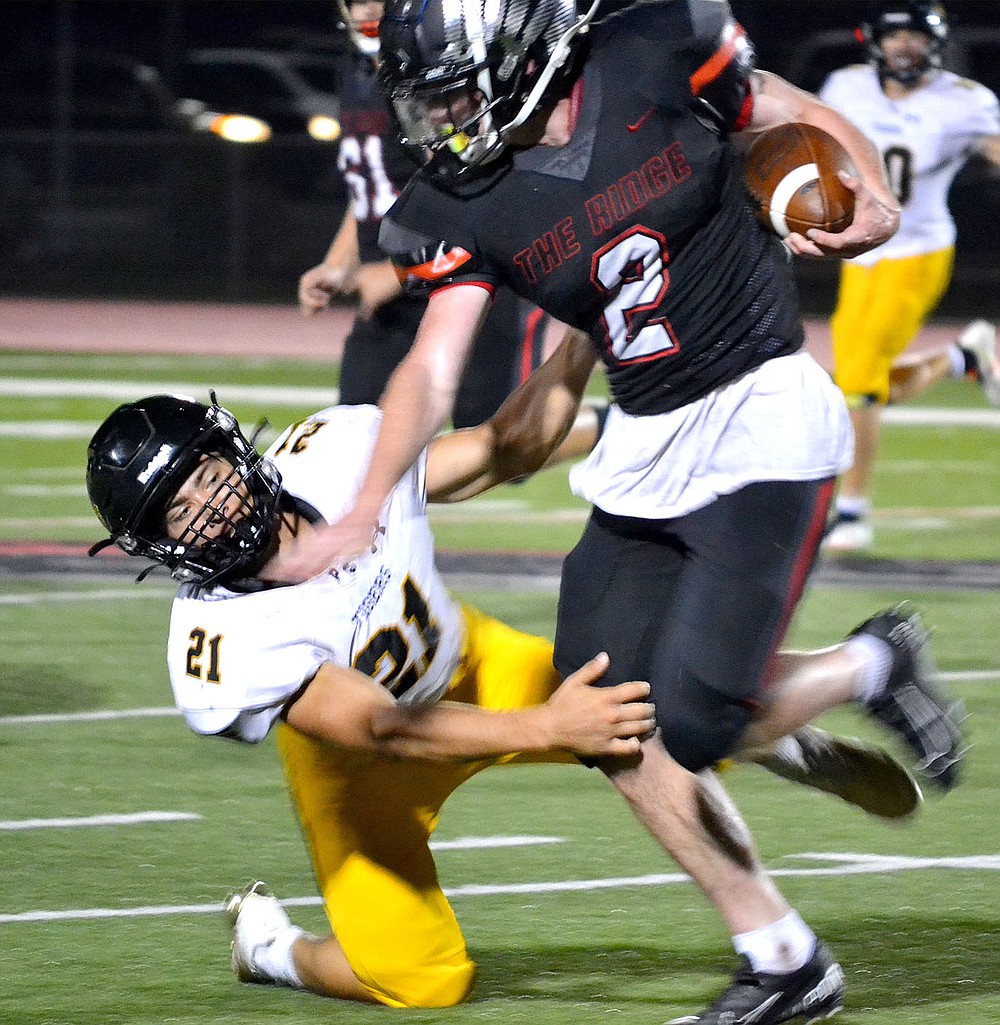 Senior running back Joe Adams evades a tackle and continues down the field Friday, Sept. 10, 2021. 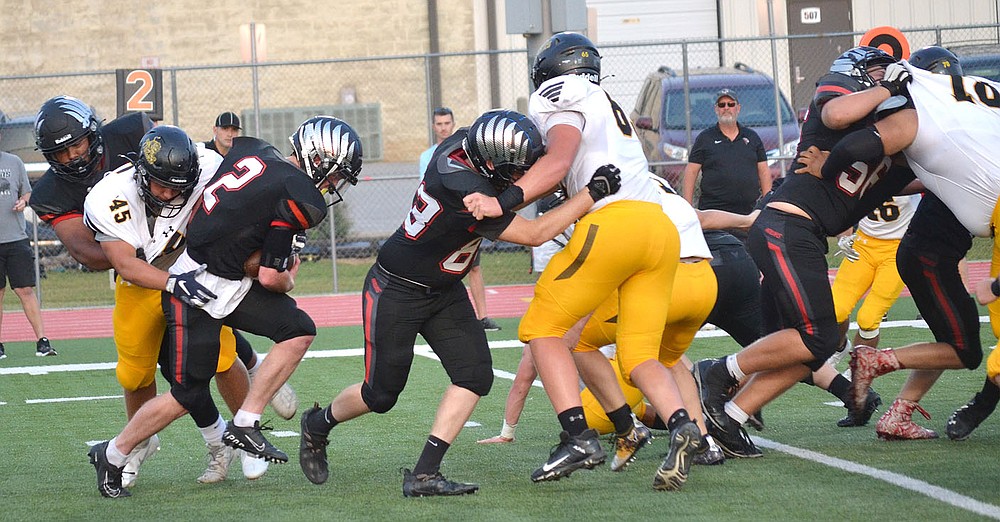 Senior Joe Adams, No. 2, tries to escape the grasp of a Tiger while being guarded by offensive linemen Friday, Sept. 10, 2021. 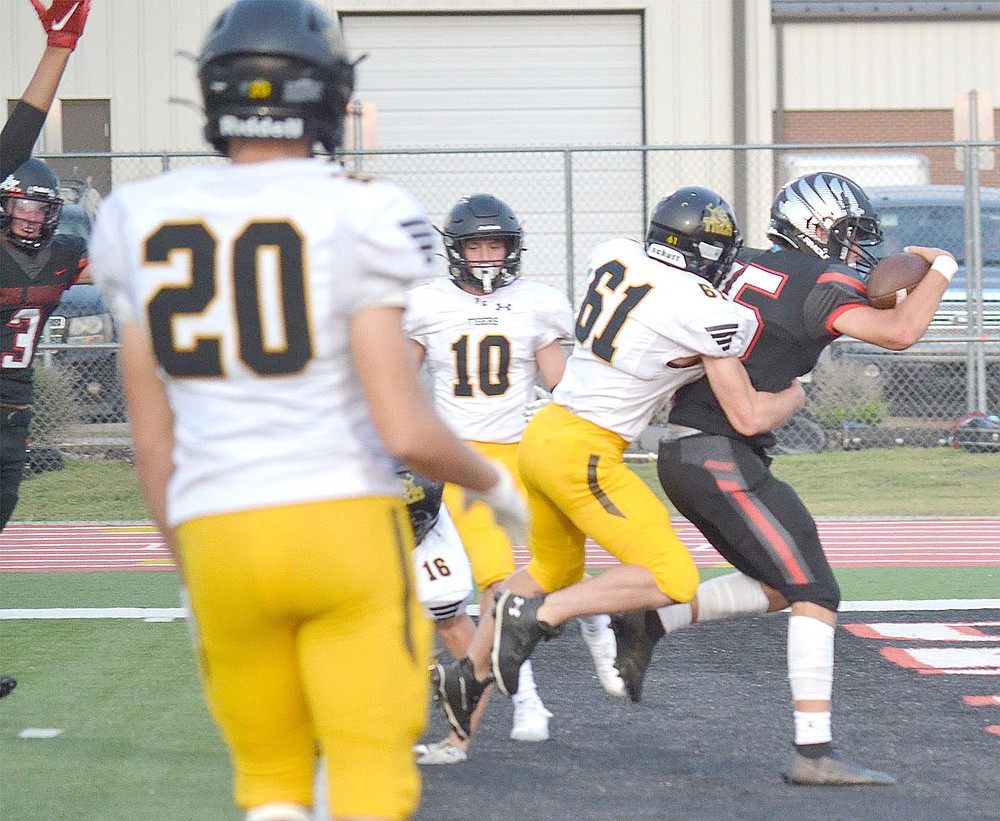 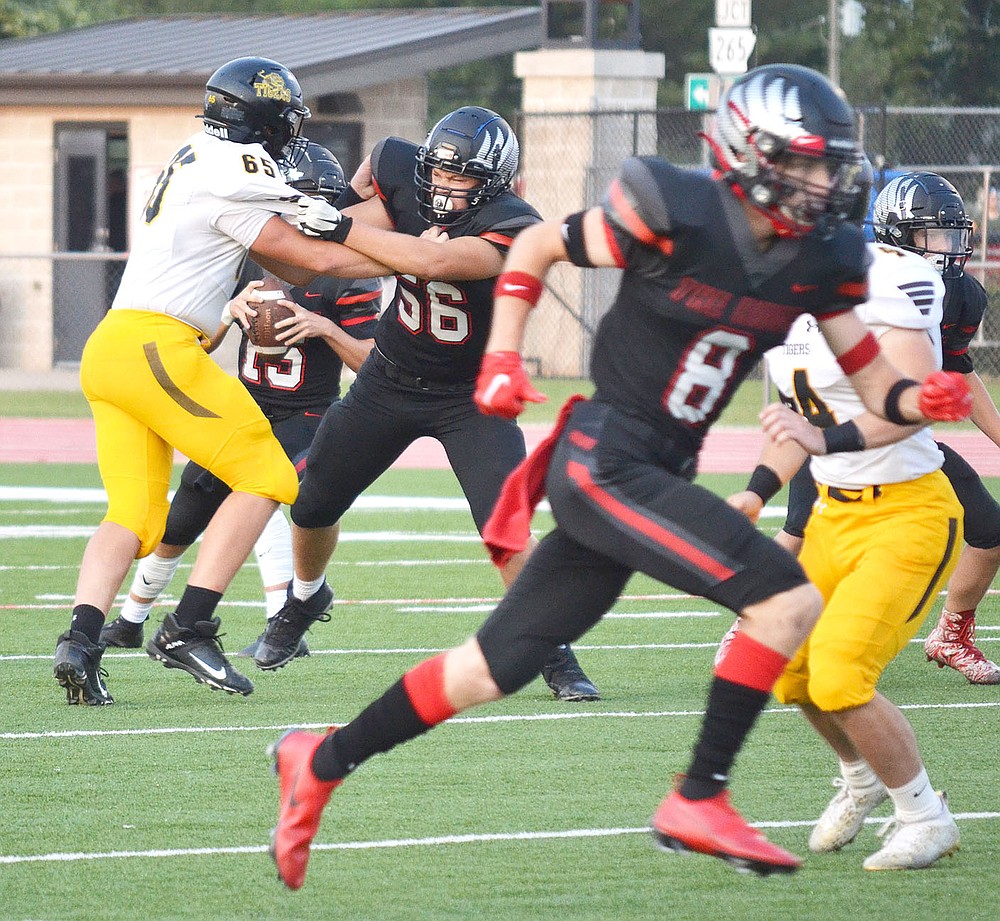 Senior Blackhawk Braidon McCarley, No. 56, holds back a Tiger defender as quarterback Gavin Dixon, No. 15, prepares to pass and wide receiver Trevor Blair, No 8, heads downfield to receive. 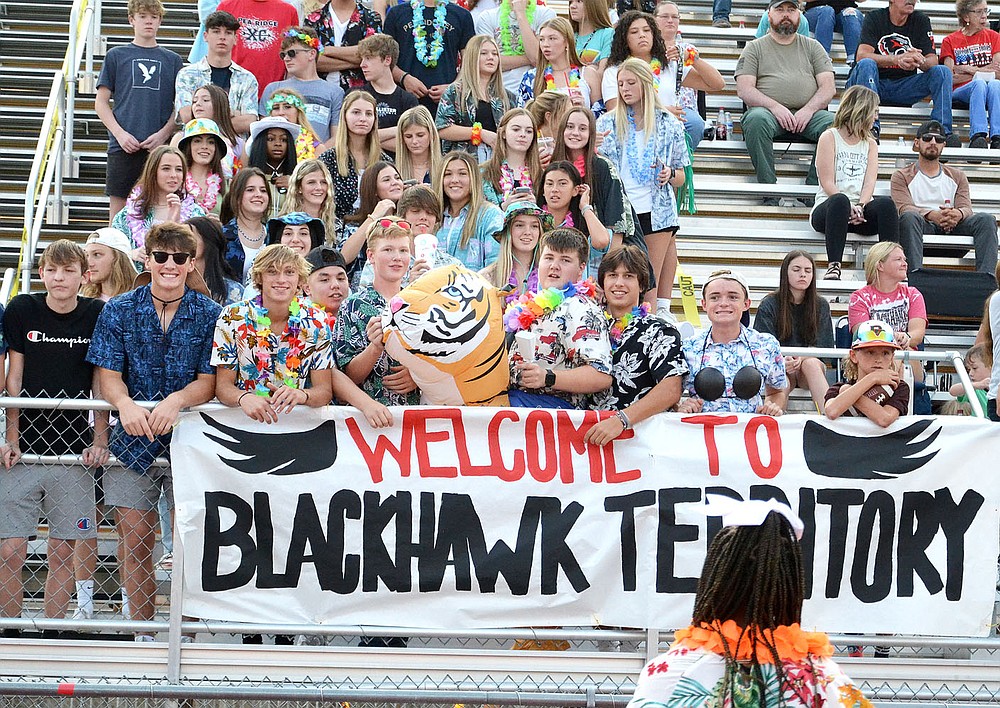 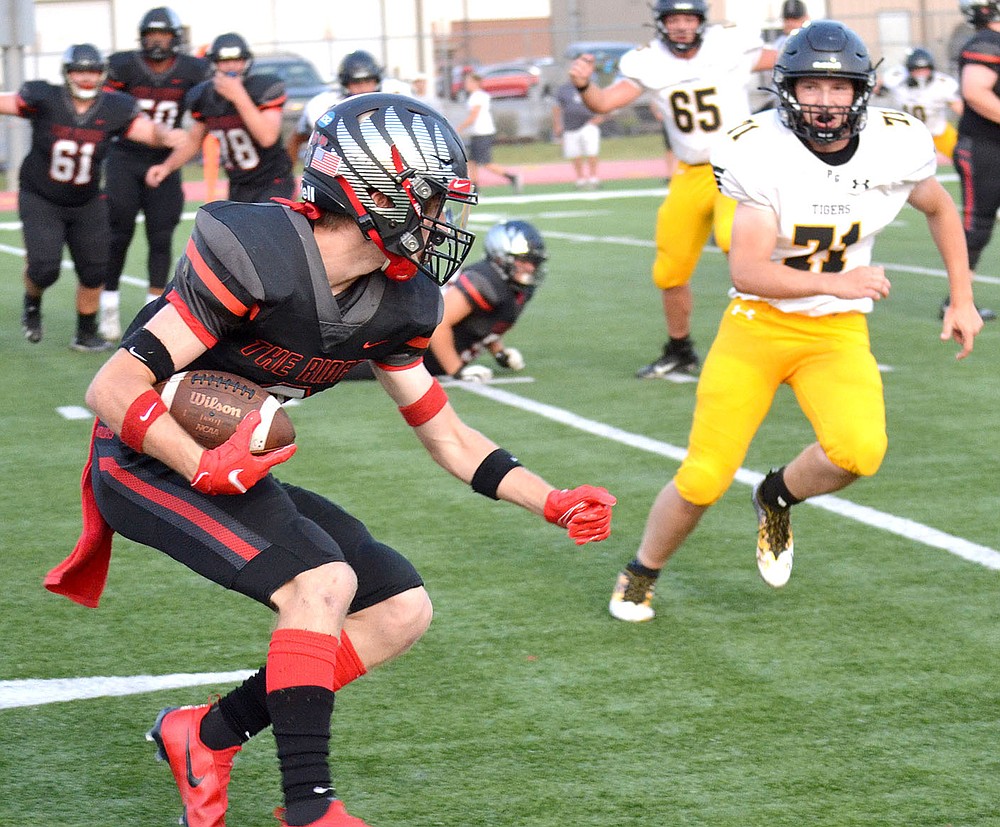 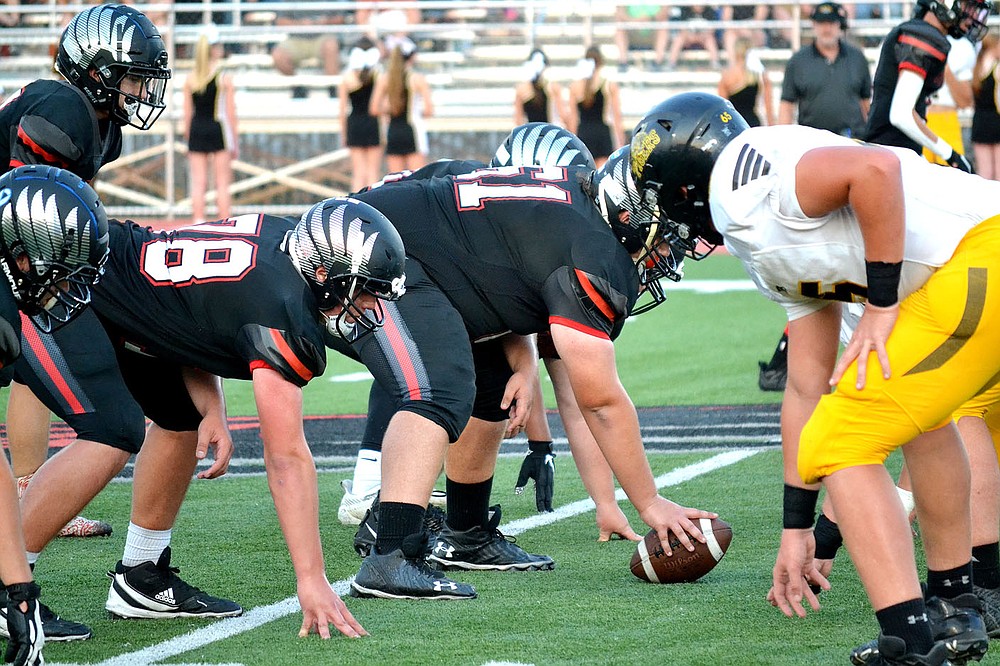