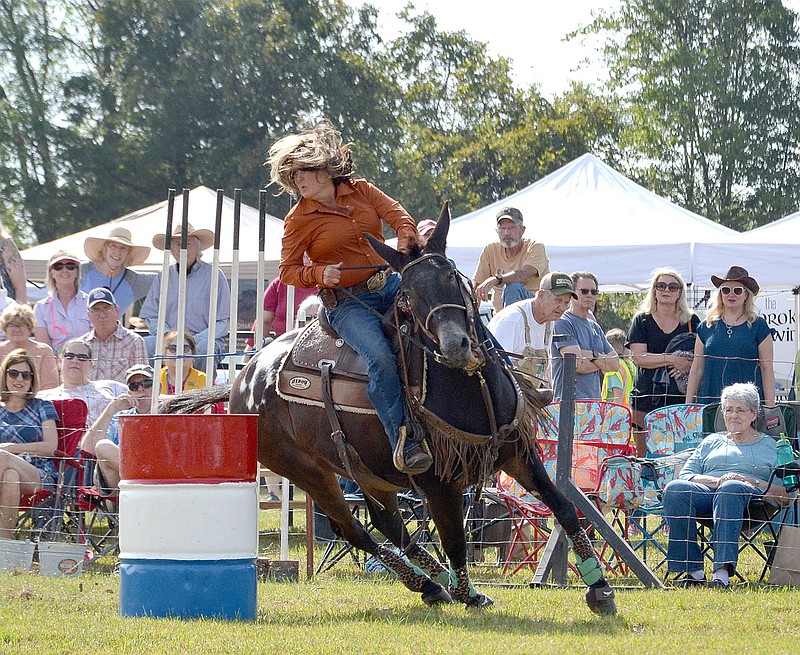 Becki Sams rounds a barrel during the barrel race.

Becki Sams rounds a barrel during the barrel race. 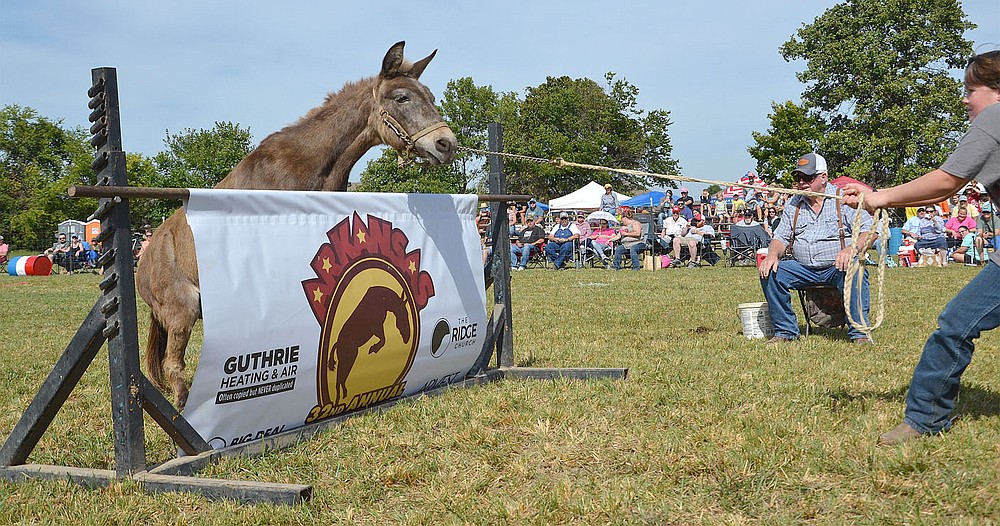 The mules sometimes need a little extra pull to decide to attempt the jump as Chett Malchow learned with Kanga, owned by Becki Sams of Oklahoma. Kanga came in second in the 51 inches and under mule jump. For more photographs, go to https://tnebc.nwaonline.com/photos/.

Colleen Born of Afton, Okla., and Comet round a barrel during the flag race Saturday. 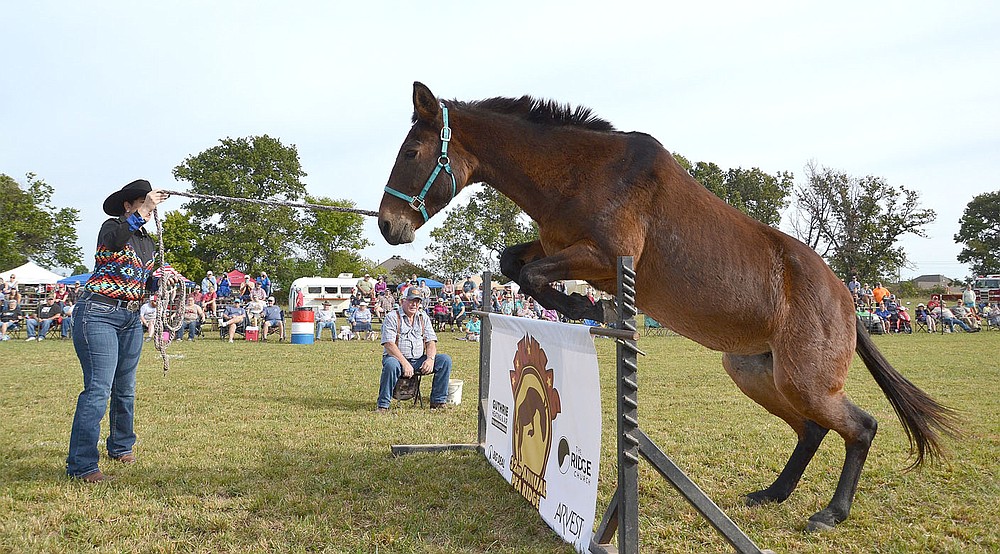 Heather Lutke of Big Cabin, Mo., shows off Halo's skills in the jump. She said Halo is more than 25 years old. 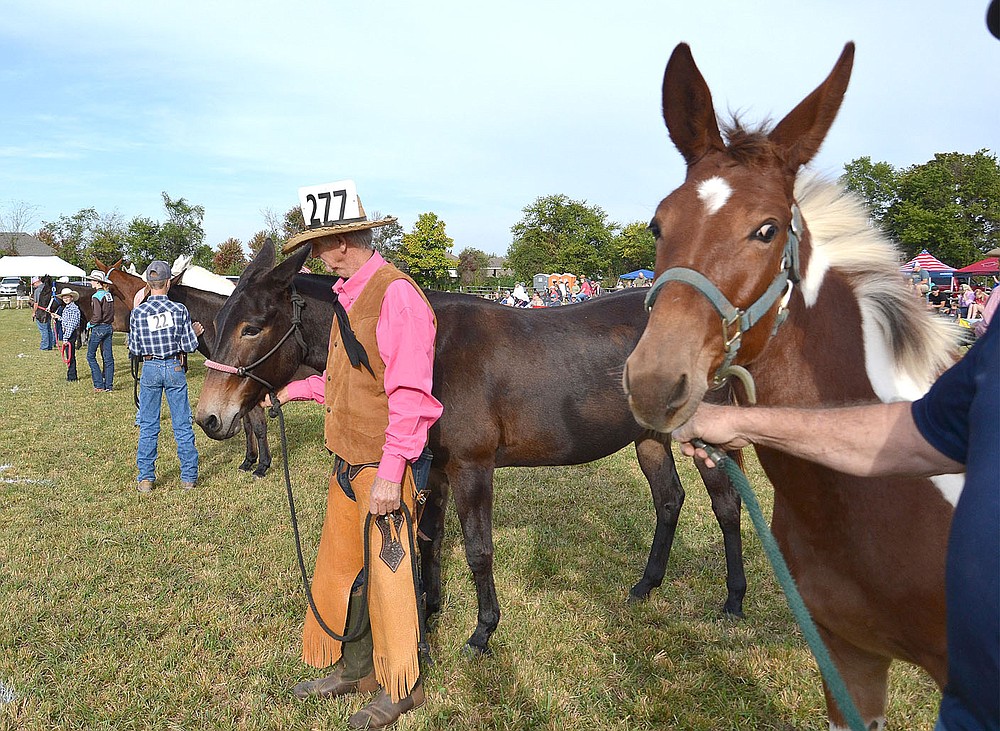 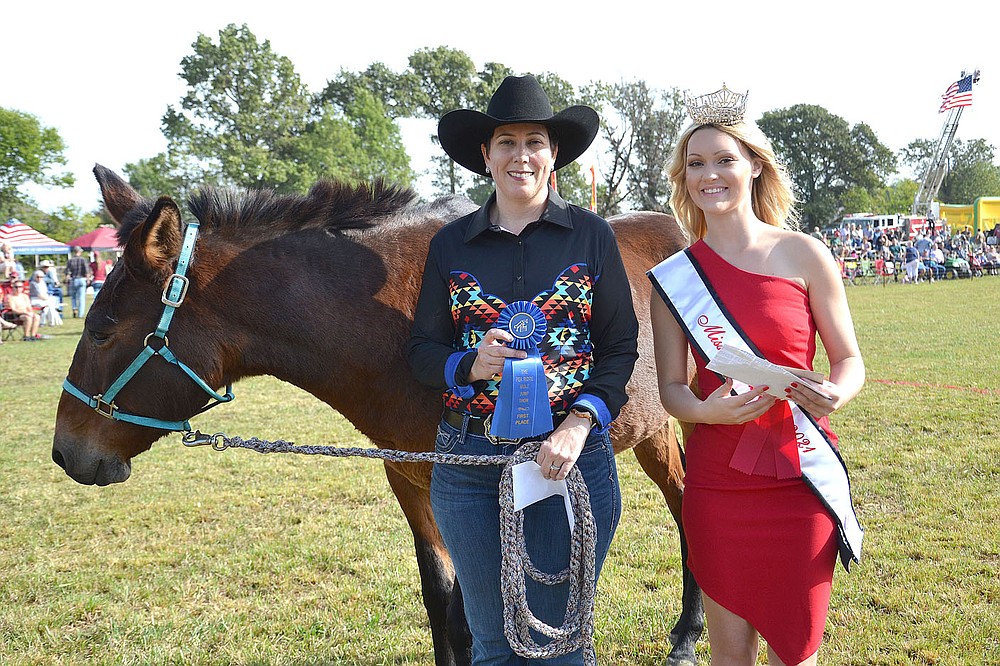 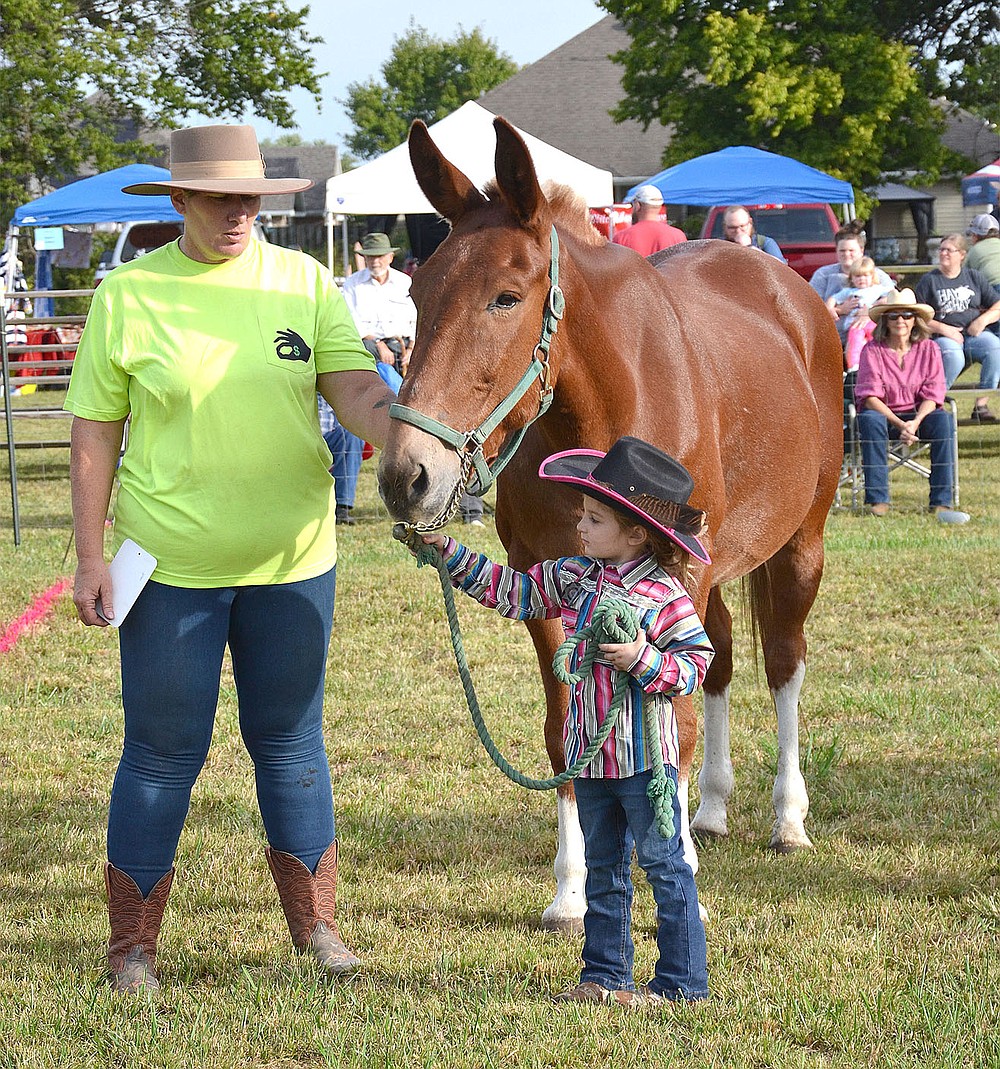 Cyndi Nelson and one of the youngest competitors waited for their turn to be judged in the halter judging. 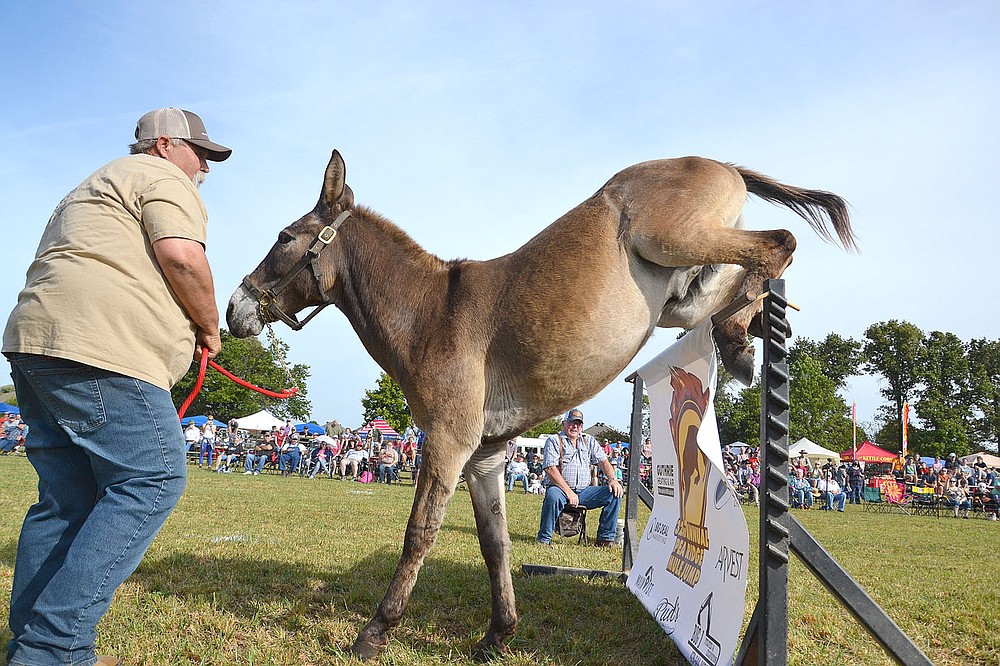 Jerry Nelson encouraged his mule to clear the jump Saturday, Oct. 9, 2021, in the 32nd annual Pea Ridge Mule Jump. Nelson, of Cameron, Mo., is a regular competitor at the event. 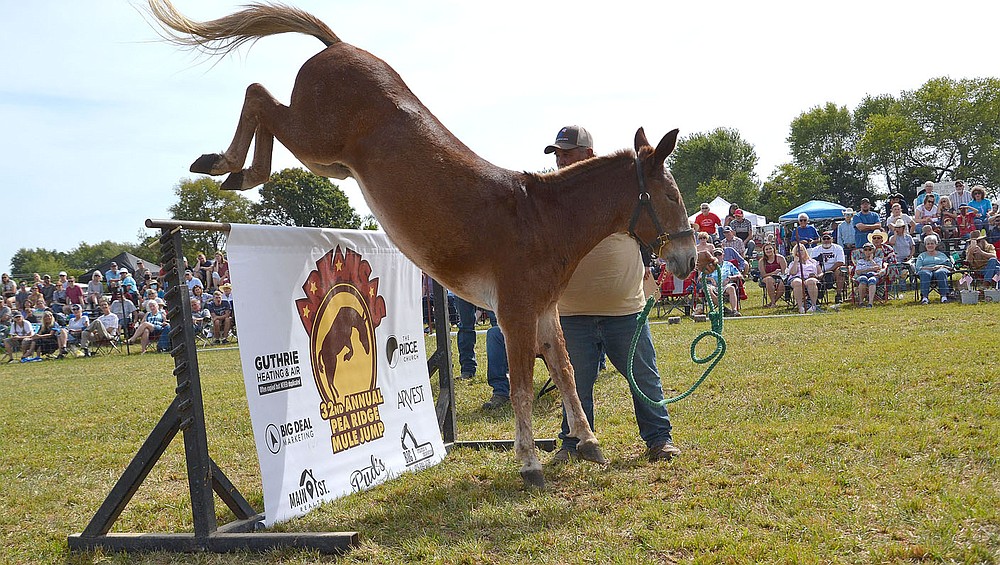 Jerry Nelson and Dexter took second place in the 51 inches and over mule jump. For more photographs, go to https://tnebc.nwaonline.com/photos/. 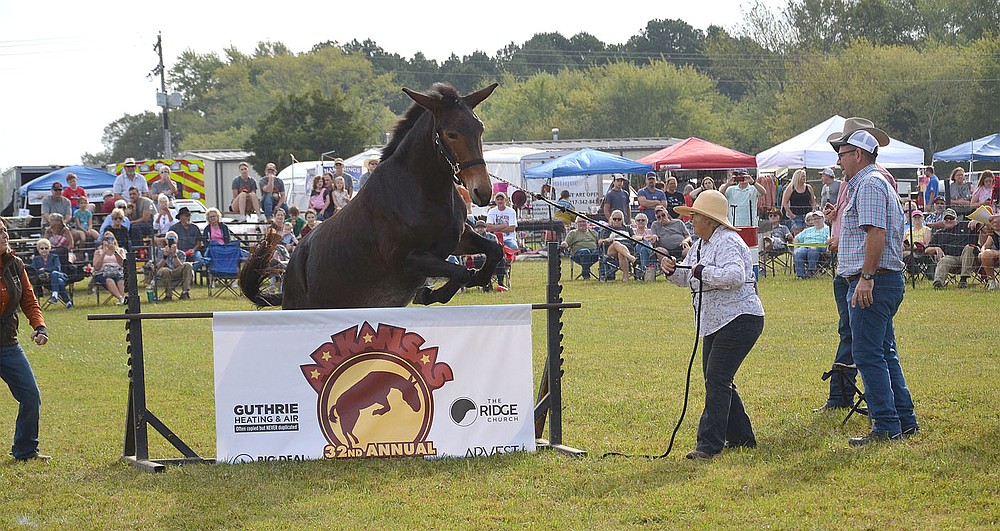 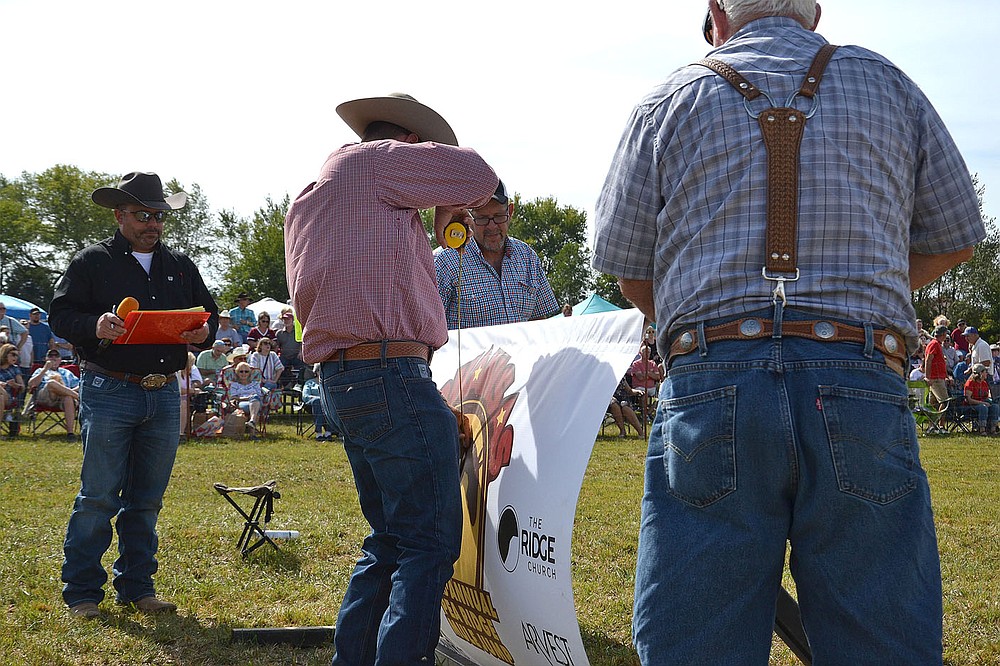 Announcer Jeremy Weir of Siloam Springs, left, watches to see how high the jump will be that Harold and Don Shockley are raising as judge Allen McBurnett measures at the 32nd annual Pea Ridge Mule Jump. 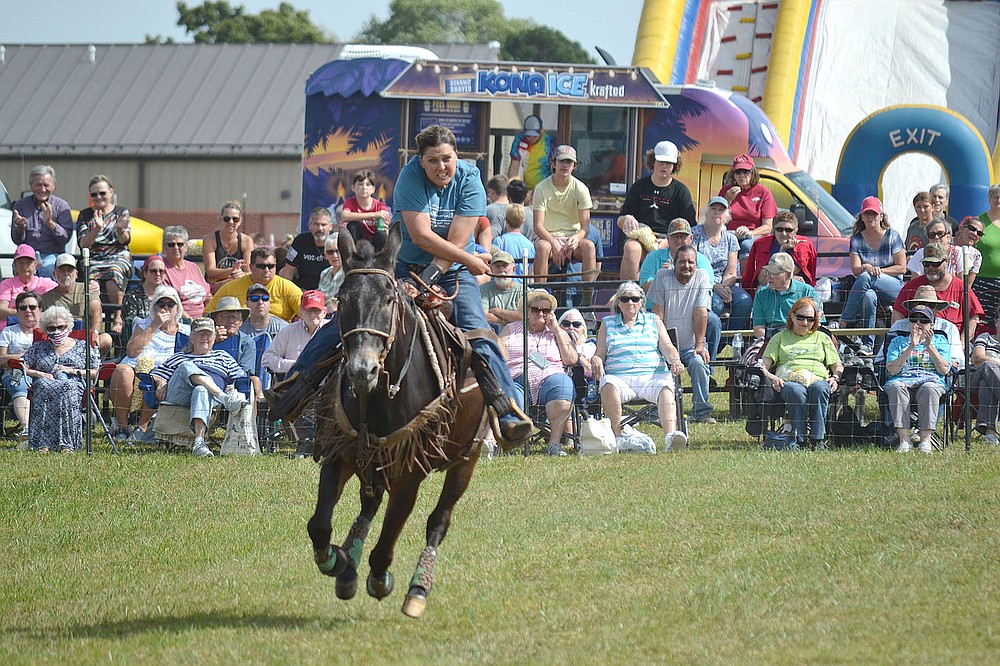 Becki Sams-Benham of Vinita, Okla., races toward the finish line after racing around the barrels in the flag race on Magic Man. 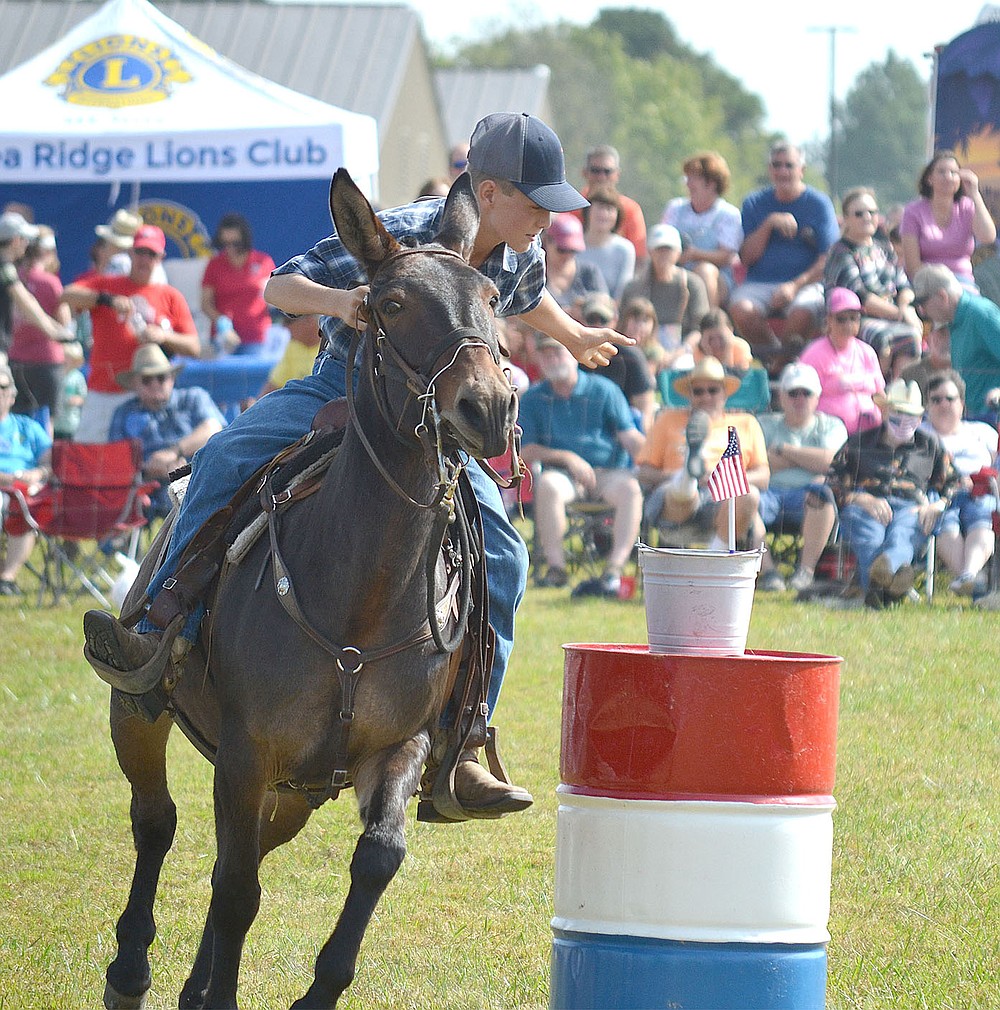 A youth carefully places the flag in the bucket as the last portion of the flag race Saturday. 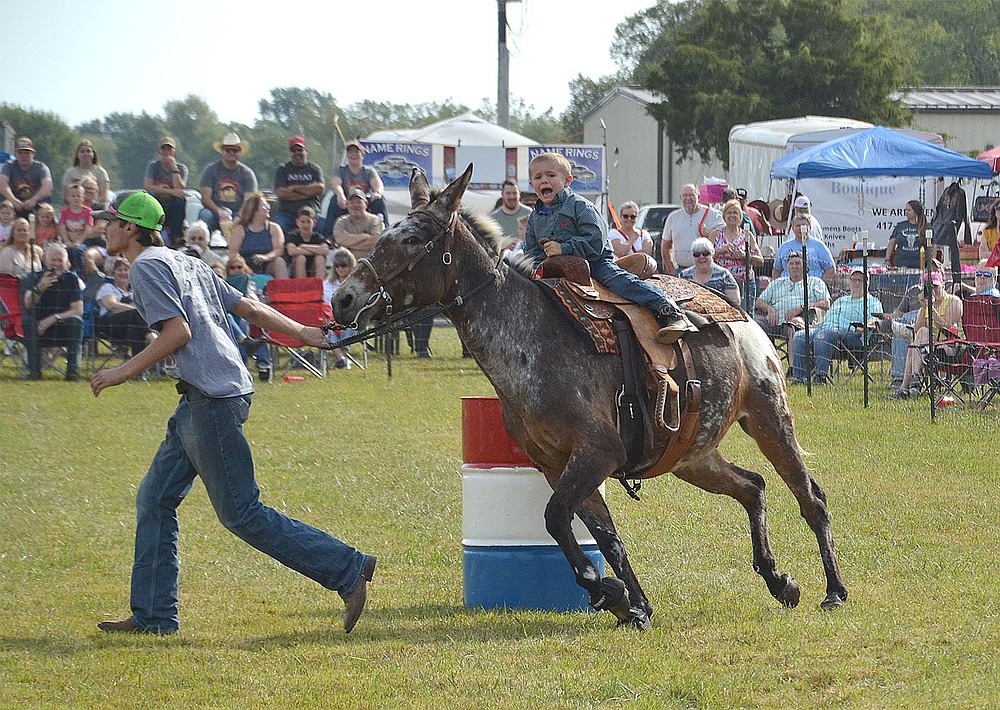 A small boy rides the mule through the barrel race while being led around the course. 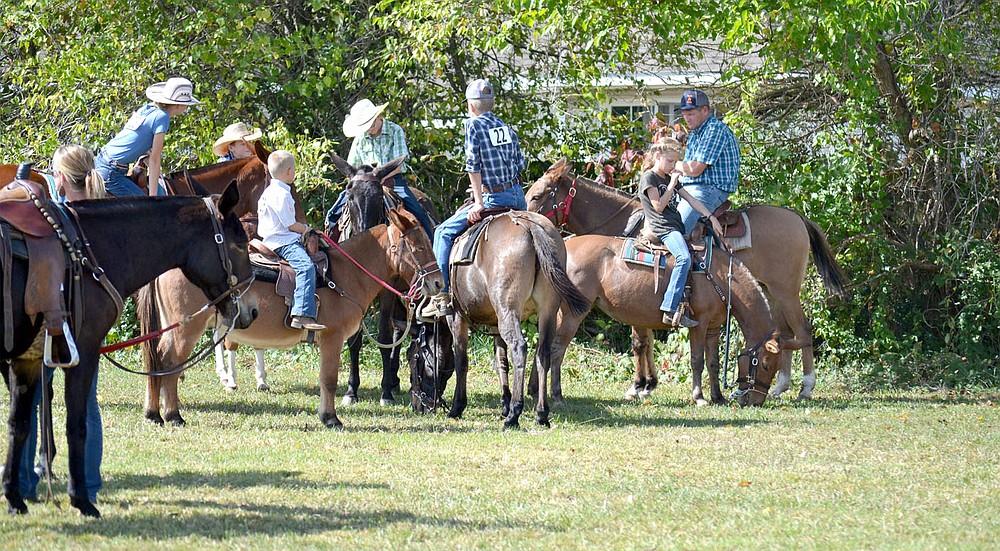 When not in the arena, mules and their riders waited and visited. 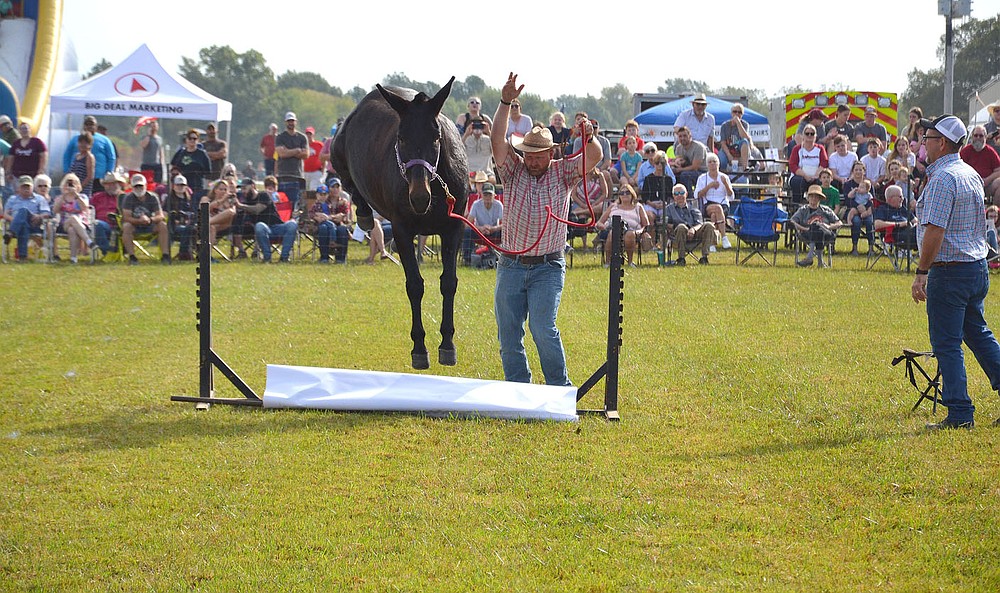 That's not what he wanted to have happen! The curtain fell as the mule knocked it with its legs. 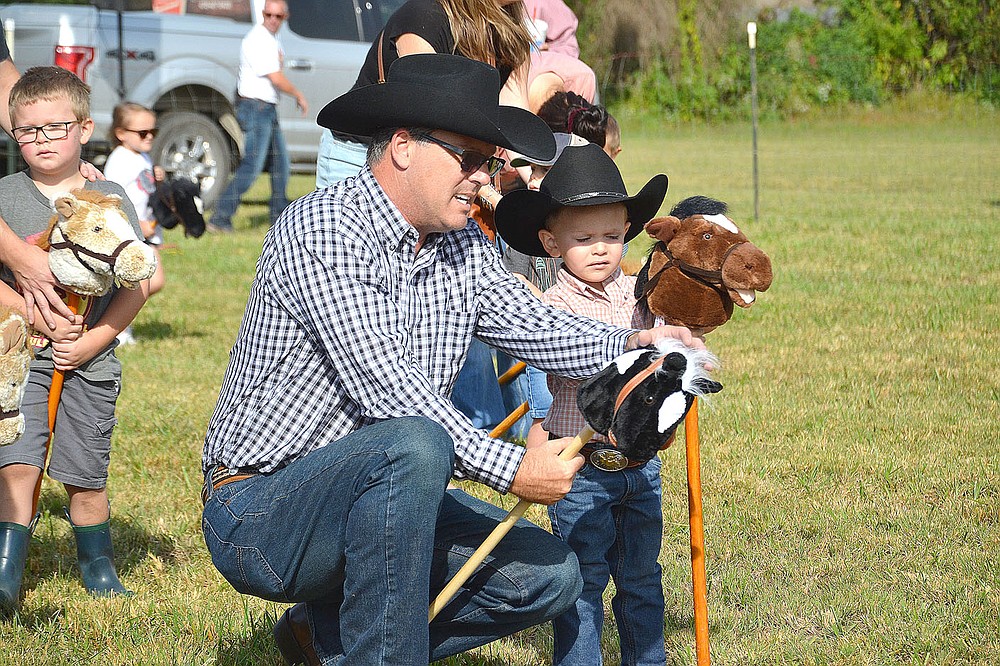 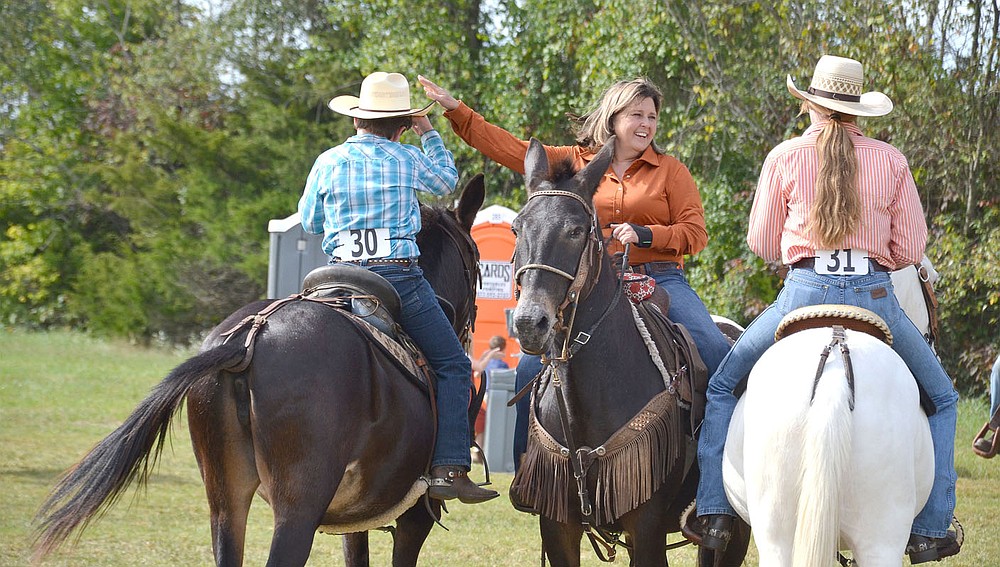 Becki Sams, whose father Joe Sams was a long-time competitor at the mule jump, visits with fellow mule riders Saturday while waiting her turn for the arena. 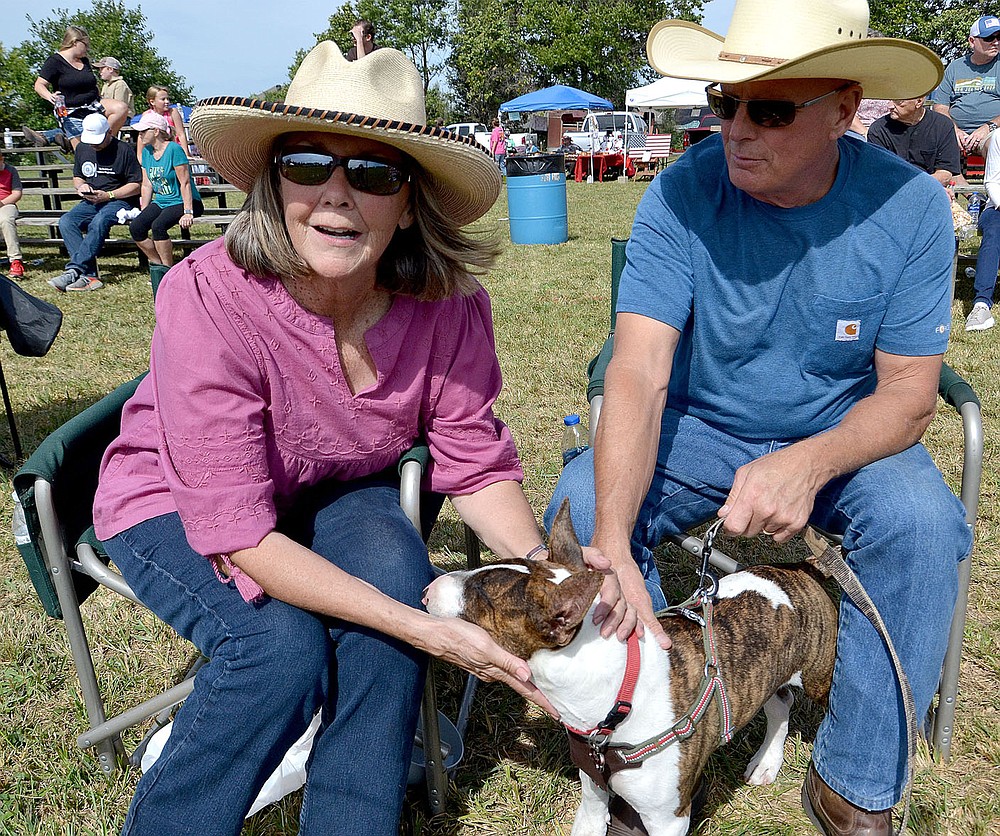 Ken and Melanie Eakin and their 5-month-old English Bull Terrier, Roy, came from Yakima, Wash., to see the mule jump. 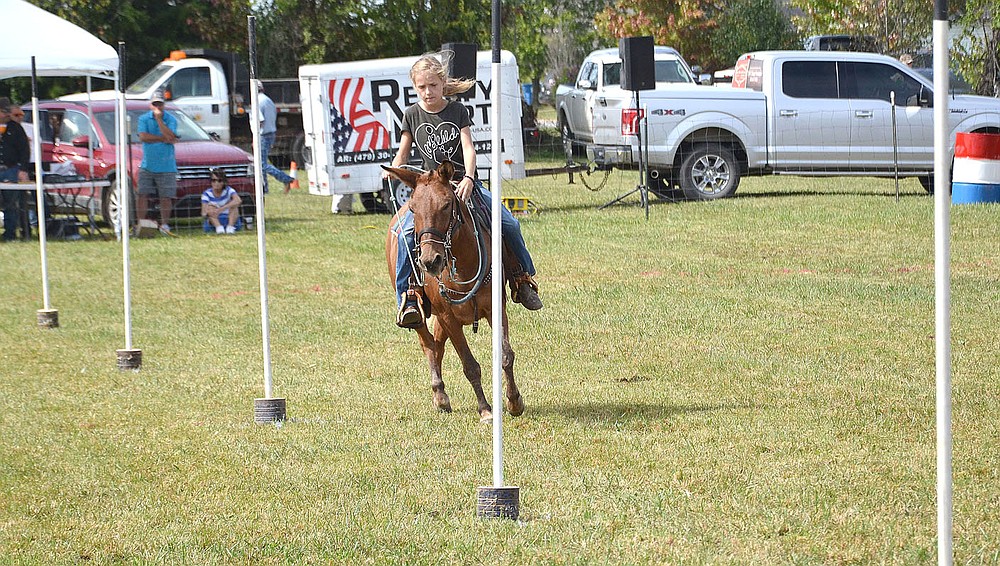 Pole bending is one of the many speed events for competitors at the mule jump.