Mules can jump -- when they want to 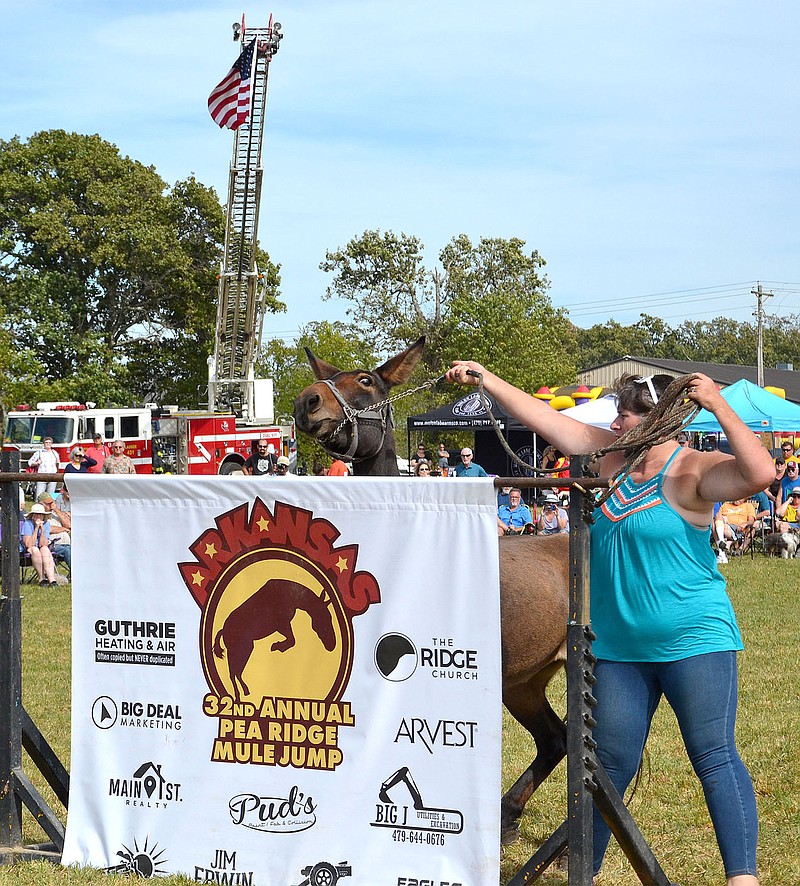 TIMES photograph by Annette Beard Miss Kitty decided enough was enough as she balked at 56 inches during the pro jump Saturday in the 32nd annual Pea Ridge Mule Jump. Owner Cyndi Nelson said she has cleared 63 inches flat footed and 72 inches with a running start. For more photographs, go to https://tnebc.nwaonline.com/photos/.

The crowds yelled and cheered, encouraging the recalcitrant mules to jump over the curtain that was higher than they were. Each mule had two opportunities to try the height, and some succeeded the second time around after knocking down the barrier the first time. Others, balked, making it clear they had no intention of attempting the jump.

The mules facing off for the pro jump were familiar to long-time attendees of the jump with each having competed before. They were Baxter from Cameron, Mo., Dan and Maverick from Seligman, Mo., Miss Kitty from Cameron, Mo., and Pedro from Centerville, Mo.

One by one, they dropped out, until two faced off -- Miss Kitty and Pedro.

Miss Kitty's owner, Cyndi Nelson, said she's cleared 63 inches jumping from a standstill and 72 inches with a running start. This time, she knocked down the curtain at 56 inches. Miss Kitty, 12, won first place in the short mules in 2016.

Pedro, this year's winner, was one of three mules in a three-way tie for second place in 2018, clearing 60 inches and took third place in 2019 clearing 58 inches. The 2020 event was canceled due to restrictions imposed by the government restrictions because of the covid-19 pandemic. The 12-year-old mule Pedro was bought by owner Richie "Preacher" Dement from Jerry Nelson who laughed after Pedro won saying "I'm not going to sell another mule to you!"

The 32nd annual Pea Ridge Mule Jump was well attended with more than 2,500 people in attendance. There were nearly 40 mules competing in several categories and 48 vendors sold their wares.

The mules and their handlers compete in a variety of events, several of which are timed, earning points that are talllied at the end of the day with the mules garning the most points winning the Negel Hall Memorial Award in youth, adult and senior categories, depending on the age of the handler.

The mules' varied in age from 1-year-old, Shasta, shown in the 51-inches and over Molly Mule halter class by Ricky McCrary to 25-year-old Halo, who won the 51-inch and over mule jump clearing 48 inches for owner Heather Lutke of Big Cabin, Okla.

Camaraderie was abundant as mule owners and handlers visited while waiting their turns to compete. Young children competed in the youth category, sometimes being led through the trials by an adult on the ground.

Veteran mule rider Becki Sams landed on the ground during one event, forfeiting her time, but continuing with other events during the day.

Announcer Jeremy Weir of Siloam Springs kept the crowds entertained and engaged, playing music, asking questions and sharing information about the mules. Weir said he had never announced at a mule jump but announces regularly at rodeos.

One couple, Ken and Melanie Eakin of Yakima, Wash., had been wanting to come to the Pea Ridge Mule Jump for years. Owners of seven mules, Mrs. Eakin saw the event advertised in Western Mule magazine and online.

"It's beautiful," Mr. Eakin said of Arkansas. The retired couple said they drove 2,500 miles "the long way" to attend with their 5-month-old English Bull Terrier, Roy, who loves mules. "We could have done the short way -- about 1,900 miles."

"We were delighted by the event, it truly exceeded our expectations. Pea Ridge's hospitality is unsurpassed. We were approached by numerous locals who gave us recommendations of places to visit while we were in Arkansas. Several people at the Mule Jump shared photos of their English Bull Terriers and showered attention upon Roy," Mrs. Eakin said.

"Without the volunteers, it would not have been successful," Nathan See, chairman of the event, said, expressing gratitude for the many volunteers, sponsors and the Pea Ridge School District officials who allowed the use of its land.

"This was one of the most organized, well put-together events and it's due to the volunteers who worked on it," See said. "The Shockleys always help and always bring the jump. Without them, we couldn't have the event. They have the knowledge, know the rule... this all started with them."

See thanked Big Deal Marketing for the social media publicity on the Mule Jump as well as all of the sponsors. 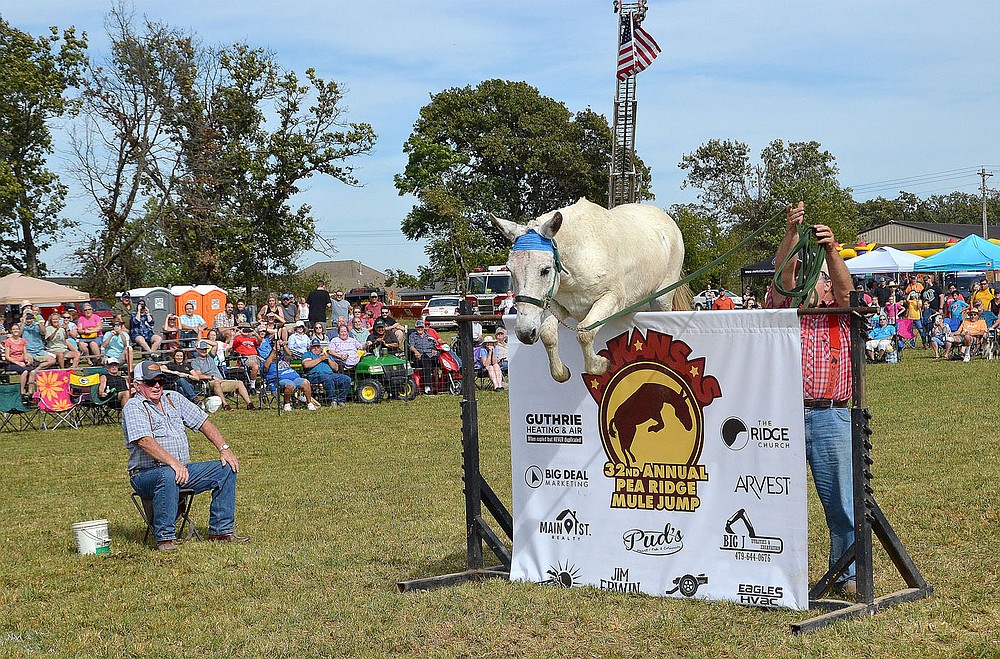 Print Headline: Mules can jump -- when they want to