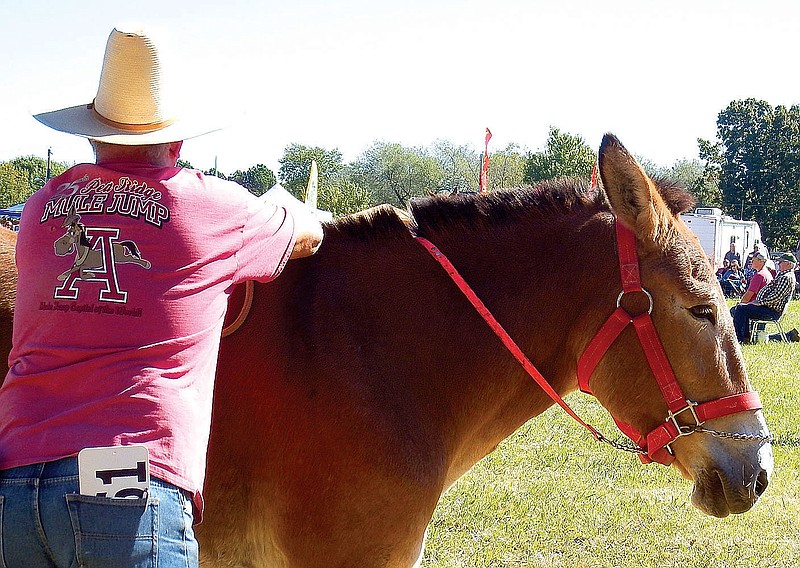 Raccoon hunters have used mules to jump fences for years. Jumping mules for entertainment began in Pea Ridge nearly 30 years ago as just one of many events of the 1985 fall festival called "Battlefield Daze," sponsored by the Pea Ridge Chamber of Commerce.

"Tim Summers at the bank asked me about mule jumps," said Paul Arnold, who was vice president of the Pea Ridge Coon Hunter's Association at the time. He said Rick McCrary was president. Arnold said he went to Oklahoma to see a mule jump to get an idea about it and came home to put one on here.

"The first four people I talked to were Tommie Yeargain Sr., Negel Hall, Don Shockley and Dale Shrader. We hunted together," Arnold said.

That first year, they had a trail ride with the mules riding up Arkansas Highway 265 to State Line Road and down Patterson Road and back to the school grounds, Arnold said. They also had a coon hunt Saturday night after the festival.

In 1987, the Pea Ridge Chamber changed the name back to Pea Ridge Fall Fest.

In 1988, the Lions Club took over the Fall Fest. In 1989, the Lions decided to call the festival the Pea Ridge Mule Jump and designate Pea Ridge as "Mule Jumping Capital of the World" to capitalize on the uniqueness of the event. The Lions used the Mule Jump as a fundraiser until 1999, when the club disbanded.

A group of volunteers calling themselves the Friends of Pea Ridge banded together to keep the Mule Jump going. Subsequently, the event served as a fundraiser for the local United Fund in 1999 and 2000. In 2001, several local civic groups staged the Mule Jump. Then, in 2002, the Pea Ridge Parks Commission took it over.

From 1999 through 2001, community belief in the value of the Mule Jump to Pea Ridge's identity kept the unusual event alive without one strong civic group to coordinate it.

In 2003, the Parks Commission inaugurated the first Professional Mule Jump with a $1,000 cash prize. After word of the prize money spread in mule-jumping circles, 2004 brought a winning mule from Virginia to take home the $1,000.

Nathan See, chairman of the Pea Ridge Mule Jump, said mule jumps are part of the heritage of this rural Ozark community. "It's important to keep it going."

Mule jumping comes from a tradition in coon hunting of having mules jump over fences rather than finding gates. Hunters throw a blanket over the fence so the mule will jump it, Shockley said. It wasn't long before hunters started having competitions for jumping mules along with their coon dog competitions.

Jumping competitions vary -- some require the mules to wear saddles. At Pea Ridge, the mules are bare backed. Once a mule walks up to the jumping barrier, it has three minutes to jump.

The mule has two tries to clear the barrier without knocking it down. Trainers can not touch the mule. They must get the mule to jump by word commands. They can hold the reins and tug them. If an owner is caught mistreating a mule, he is disqualified.

Mules are eliminated until only one remains and that mule continues to jump until it reaches its limit. The mule seems to know instinctively when that limit is reached because it just won't jump any more.

Some of the other events are similar to rodeo events, except contestants ride mules instead of horses. Amusing incidents ensue as mules exhibit their characteristic stubbornness.

In halter class events, the mules are shown for judges to pick the best-looking mule.