The presence of a teenage father on the practice field, locker room and playing field incorporates an interesting dynamic for the Blackhawk varsity football team.

"Starting on on defensive line we've got Justin Blount (5'11", 210 pounds), a senior, who comes down there and obviously does a great job, but he is a new father. He's a guy that the kids look up to," said Pea Ridge head football coach Brey Cook, who praised Justin for doing an incredible job in the offseason preparing for his senior season and a world of personal responsibility that extends far beyond football.

The birth of a son, Austin Blake Blount, on Dec. 7, 2020, to Justin and Danielle Martinez revolutionized Justin's worldview and everything looks different now.

"When I first found out I was going to become a father I kind of didn't believe it at first," Justin said.

The process in choosing to give a child life isn't a decision that can be taken for granted. Many teenage parents never experienced the fatherhood privilege Justin now relishes in a society which permits legal alternatives such as adoption or abortion. Justin found himself having a lot of the same conversations over and over.

Still there's an unwritten code among teenagers who have a way of holding each other accountable and won't hesitate to probe into a personal matter or voice their opinion.

"There was a lot of people who came to me and asked me a bunch of different questions," Justin said.

Among the queries during those impromptu press conferences in the halls, parking lots and social gatherings around Pea Ridge were questions like "how do you feel?" and "Is it worth having a kid?"

As he navigated the prospect of becoming a teenage father, Justin settled the issue in his mind and answered the curious the best way he knew how.

"Yes it is," he simply stated.

But that straightforward answer triggered skepticism.

Peering from the outside in not all of his peers could perceive Justin's heart and he heard suggestions like, "don't do it at such an age, you just got to grow up a lot quicker."

That was a point Justin wasn't going to debate, yet he hung onto his convictions and circled the wagons drawing on the strength from his inner circle.

"It was more like my family, it was my dad, my grandma and my mom, and then it was also my team, they helped me through it," Justin said.

The Pea Ridge coaches played an instrumental role, something Cook draws a deep sense of satisfaction from while realizing as a head coach he is in position to encourage and influence young men as they sort their way through intellectual confrontations while evaluating sometimes conflicting information and juggling differences of opinion.

"I think the guys know that they've got us for life. He's got the purest Blackhawk heart, one of ours for life and we're always going to be there for him," Cook said.

Justin appreciates the direct input from the Blackhawk staff in weighing decisions that affect him throughout his lifetime.

"My coaches, they give big things to me ... They helped me through it and (are) still helping me to this day," Justin said. "My work, they played a big part in it, too. They took care of me."

The payoff came when Justin first laid eyes on the tiny infant boy who bears his name.

"When I saw him for the first time it kind of changed my whole world. It changed how I thought, changed how I should act," Justin said.

The fathering instincts activated instantly within his being and Justin knew his focus must shift towards a mindset of provision, protection and nurturing.

"I can't act like a teenage boy no more, got to grow up a little quicker, but that's OK. I love the little guy to pieces. It's the best thing that's happened to me," Justin said.

Justin's biggest fan isn't old enough yet to understand what football's all about, and that doesn't matter.

"He's going to be at every single one of our home games and hopefully come to some of our away games if they aren't too far," Justin said.

Going to high school on a day-to-day basis, Justin's no longer fits the mold of a typical student. Justin discovered himself crossing bridges in life in front of his head coach establishing a scenario where the student might one day become the teacher.

"Obviously, I may come to him for advice on this one day so he's farther ahead than I am so I'm very excited for him," Cook said.

Justin's developing a father's vision for his son's life. He wants to start Blake off playing pee wee football. If Blake doesn't like it, then he doesn't have to play football. Justin's not going to force him.

"But he's going to be successful. I want to make sure of it," Justin said.

Justin fully intends to make sure Blake goes through school, gets a good job, and benefits from his father being right there with him through it all.

"Hopefully he turns out to be a great kid, a great young man," Justin said. "And hopefully be like me." 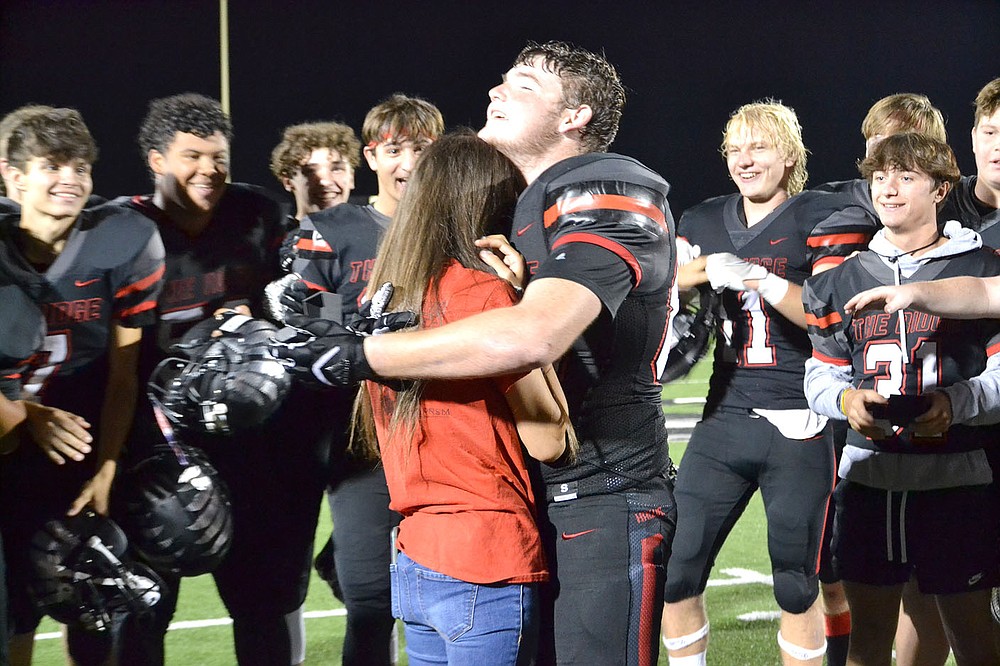