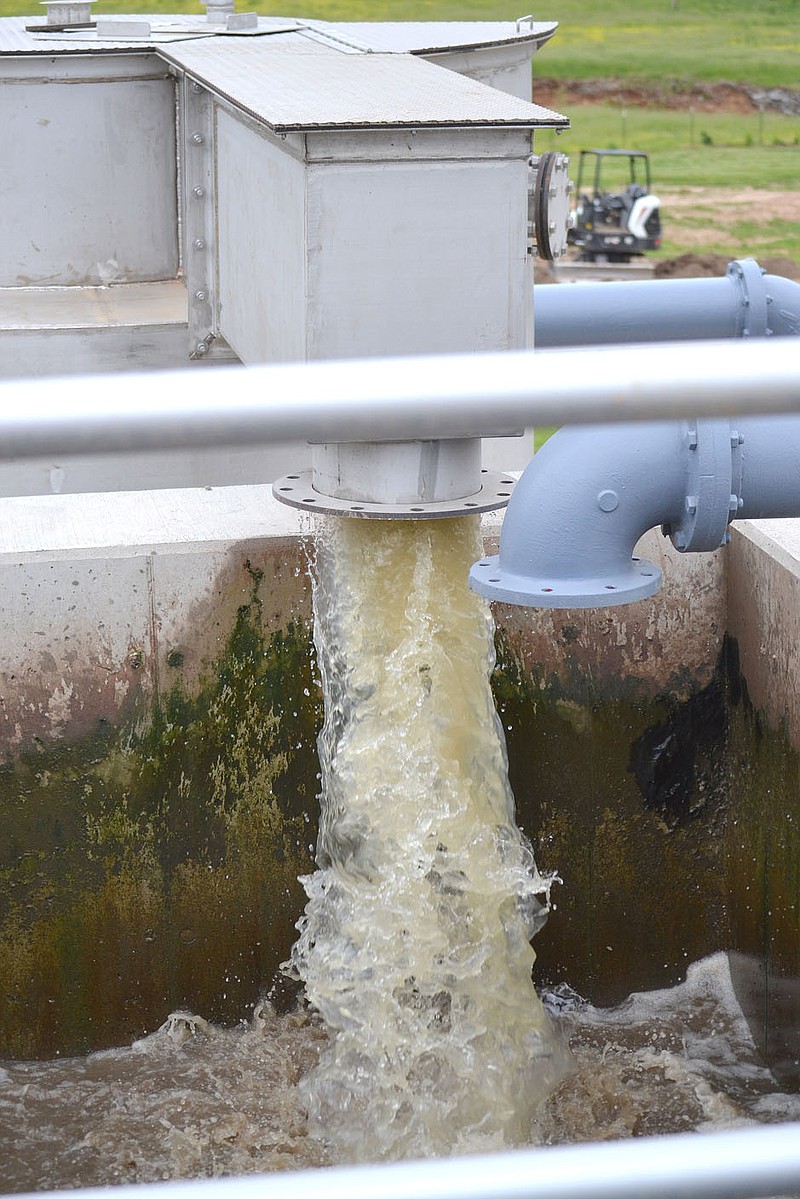 PEA RIDGE -- "A lot of forethought has gone into this," Ken Hayes, superintendent of Pea Ridge Water Utilities, said of the new $7.5 million wastewater treatment facility now in operation.

The city had outgrown the old facility. City officials approved construction of the new facility in November 2018.

The plant, which has a one-million gallon per day capacity is now running about 400,000 gallons per day, Hayes said.

"We've got the capacity," he said, explaining that the clarifiers can handle two million gallons a day, much more than is currently running through them. "The things we'll have to upsize first is the basins."

"What will happen is, we'll add another set of basins," he said, adding that growth may push the addition of that in five years instead of 20.

"This plant is very automated; it'll pretty much run itself," Hayes said. "Jake (Wagner), he does lab work.. Any adjustments that need to be made, can be made with the computer."

Wagner, while employed at Pea Ridge, trained by working at the Rogers plant for about a year in addition to working at Decatur and going to classes. He is a 2005 graduate of Pea Ridge High School. After working about a year at Marvin's, he began working with the Water Department in December 2007.

"I like it," Wagner said. "You learn something new every day. You do different stuff every day. It opens up windows as far what you learn."

"Most of our guys, they could operate the plant ... but Jake's learning the 'why' you do it," Hayes said.

Wagner said he enjoys learning and even wants to research more about it when he goes home in the evenings.

Both Hayes and Wagner said Wagner plans to test for Class IV as soon as he can and will have as good a career as a college graduate.

The current technology is far different now than when Hayes earned his chemistry degree in college. All the tests are now dependent on electronics.

"It was very time consuming," Hayes said of the way he learned.

As the wastewater flows into the plant, it first goes through grit removal.

"It removes any inorganic stuff that the bugs can't eat and it'll go in the dumpster, even dirt, sand, coins," Hayes said. Another stage takes out "a lot of the lighter stuff -- wipes. The grit removal takes out the heavier stuff."

"This plant is very efficient," he said.

"Everything goes through there first -- the oxidation basin, head works, separating everything out, water with all the organic matter to here, to feed the bugs," Hayes said. Then, after the water is screened, it goes into an anaerobic basin that takes care of the phosphorous.

"We run very, very low oxygen -- with air diffusion, putting in different amounts of air," he said. "This one gets rid of nitrogen and ammonia and by the time it gets around here, it's just organic matter and then to the clarifier."

Bugs, microscopic, vary in age and groups; "mixed liquor" is bugs and organics. Hayes said it's complicated to keep the bug population properly balanced. "It's pretty complicated. The computer helps control your sludge."

The treated water flows through another filter, then through two ultraviolet light disinfectors and to the creek.

"We don't use chlorine anymore... the UV disinfection kills any pathogens that are left," Hayes said.

"Here," Hayes said, pointing to one stage, "the bugs are heavy. All the bugs will go down and the clear water is up top. The scum here will be separated right here. We've got two clarifiers."

"We're still tweaking a little here and a little there because it's a new plant, there are a lot of variables."

A recent report revealed that the suspended solids are not only low, but "non-detected" which Hayes said is extremely good.

"This department is not a small town department. We're not.

"We do things with technology. With this plant, with the technology that we have, we can do things most northwest Arkansas plants can't do," Hayes said, explaining that he and his employees are multi-talented, working in the field as well as in the office.

"We do stuff, we put in sewer and water lines. This is a very efficient, well-greased machine," Hayes said, crediting the work ethic of the department personnel.

"The people who work for this department are smart; when I step out of here, it'll go pretty well seamless," he said. There are eight employees in the field and five in the office. "I've got two millennial supervisors who are very sharp.... we've got some very nontypical millennials."

Hayes and the employees constructed a couple of the buildings at the plant themselves, saving the department time and money, he said.

"Those are for rainwater," Hayes said pointing to lagoons which were used by the old plant. In two of those, there is 32 years of sludge, on top of which is water. The water in the lagoons is kept aerated.

"The next phase is to put in sludge handling," he said. "Once you get it into a cake form, you have it hauled up into Missouri. They land apply it. It's good fertilizer. It's dead bugs, it's not 'poo.'"

The heavy rains "make my job a nightmare," Hayes said, explaining that two lift stations had to be shut down because of the flooding. "It's because of rain days like that. It's not capacity.

"It's the two to three times a year that we get flooded," Hayes said, noting that in the older areas of town, there are manholes in valleys that get inundated with rainwater.

He is working on a solution to that problem.

Annette Beard may be reached by email at [email protected]