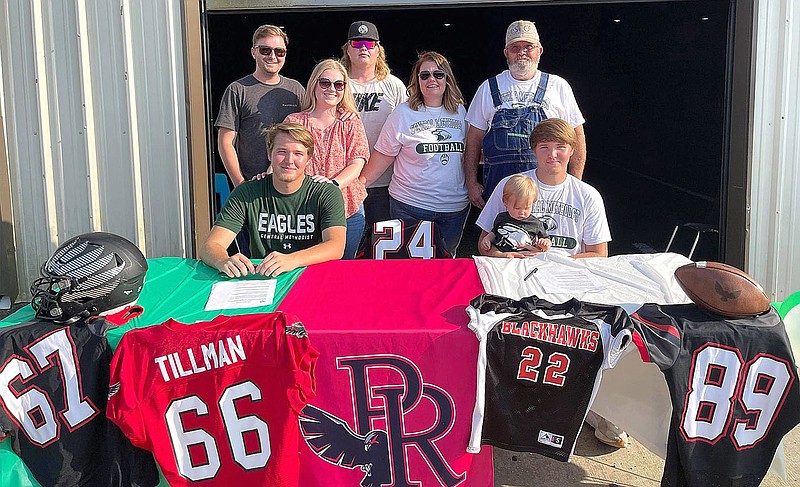 Brothers Cooper and Samual Tillman signed letters of intent recently for Central Methodist University. The brothers were accompanied in their celebration by their family — nephew Oliver Holland, sister Katelin Holland and her husband Zach, brother Jackson and parents Tim and Chelle Tillman.

Brothers Cooper and Samual Tillman have been Blackhawks their entire school career. Together, they signed letters of intent to become Central Methodist University Eagles.

Head Blackhawk coach Brey Cook said: "Your family has given a lot, and guys, my only advice to you is that you do not forget it."

"Everyone here has played a roll in supporting these two in some way shape or form. Especially the Tillman family. Countless hours of traveling, mountains of food and all the support it takes to get to sit in these seats, and sign the papers that these two are about to sign.

"I think we all know that they aren't going to forget that. I was only fortunate enough to work with Sam and Cooper for their senior season. but that was enough to get a glimpse of their character and their somewhat hidden personalities."

"These two don't say much.

"But they don't have to. These two multi-sport athletes lettered in basketball, baseball and, obviously, football. More than that, they lettered in the classroom with Cooper's 3.8, and Samual's 3.7 GPA. These two truly lead by example in absolutely everything they do."

Cook continued: "Another example of this leadership showed up last August. When we started, it was evident that Coop wanted to play tackle. It was also evident that he would excel at it. But before we can play tackle, we have to snap the ball. And it just so happens that Coop can excel at that as well.

"A year ago we moved him from the spot he wanted to play, to a position we needed him to play. And today, he is getting his college paid for.

"Samual's senior year followed a somewhat similar path. As a leader on the defensive line he made my life miserable during fall camp, But during the season he quickly became one of my favorite players. His physicality on the field was impossible to ignore. So much so that we actually convinced him to play a little offense. A little, quickly became a lot and Sam became a two-way starter earning All-Conference recognition.

"Two Tillmans on the same line of scrimmage is a dangerous thing," Cook daid. "And because of that I am jealous of Central Methodist. They are getting two young men who model exactly what we at Pea Ridge football strive to be. To any young players who might be watching this, please do yourself a favor and follow the example the Tillmans have set."