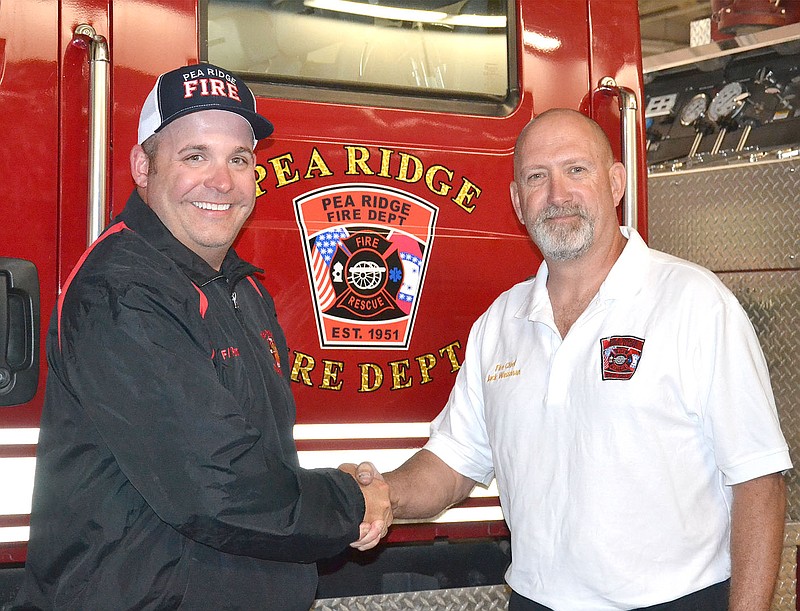 In his two years of service to the Pea Ridge community, Fire Chief Jackie Wassman has taken many steps to move the all-volunteer department to a combination department of professionals committed to meeting the needs of the community and surrounding area. Now, he's handed over the reins.

"This Wednesday, June 30, our Fire Chief Jackie Wassman will be retiring," Mayor Jackie Crabtree said last week. "Chief Wassman has served our community well and we appreciate all he has done"

"Effective July 1, 2021, assistant Chief Jared Powell will assume the duties as acting fire chief. Please give him your full support as he takes on this role."

Wassman, hired July 16, 2019, as chief in Pea Ridge, said: "One of the things I felt was very, very important was structure. We needed SOPs (standard operating procedure) that were easy to understand, that anybody could read and understand how this department operates. That's one of the biggest things.

"My goal has always been to move this department to a full time department, I think we're getting closer and closer all the time."

Wassman implemented paying firefighters to be at the station seven days a week. That procedure decreases response time as firefighters can immediately take equipment and go to a scene where volunteers will meet them.

"I think we it's time for this department to be able to provide the coverage we need," he said. He applied for a Staffing for Adequate Fire and Emergency Response (SAFER) grant to fund firefighters and has increased the education for the department personnel. The grant provides federal funds to pay salaries for up to three years to assist a department in transitioning from a fully volunteer department to a combination department.

He said he also educated city officials and the City Council members about the department, its needs and procedures.

"A lot of my time really is spent with city officials about how we should be running the department and what we need to get there. Most have been very, very attentive to what we've done and what we're trying to do," he said.

Wassman's education and 26-year career with the Rogers Fire Department provided a good foundation for his time at Pea Ridge.

"It was very easy, coming from 26 years with a very professional department to show why we need to do it a certain way," he said, recalling that he began as a volunteer with Avoca and pursued his education while working.

"My masters is through Oklahoma state University in Fire and Emergency Management Program," Wassman said, adding, "The one I'm more proud of is executive fire officer, the highest level you can get at National Fire Academy. It was a four-year program and I did both -- started and finished at same time -- completing a masters in four years and doing EFO in four years while working and family. I would not recommend that to anybody. There were a lot of research papers."

Wassman and his wife Rebecca have three grown children.

"They have been incredible!" he said, noting that in July, he and Rebecca will have been married 28 years.

"She has stood by a lot of stuff for me. I've gone to school. Owned businesses. Been on all kinds of adventures. I can't say enough good about my wife. She's an angel!"

"My kids have been supportive -- they didn't know any different; my kids grew up in the fire house. My son was born while I was in paramedic school. He just turned 25," Wassman said.

Laughing, he recalled when his son was in the second grade and came home from school saying he didn't want his dad to be a fireman anymore.

"I thought it was because he'd heard something about danger," Wassman said, "but it wasn't. He had figured out at school that his buddies' dads came home every night.. He thought every dad spent 24 hours away from home."

"The hardest thing about this job isn't fires, it's not training the guys. It's the day in day out managing people. There are a vast array of different mentalities, thoughts, ideas of what other people think and the direction the department or EMS service should go. It is the most difficult thing to try to deal with.

"You're not going to please everybody. You're going to make people mad. People are going to leave, but I do believe we have gained a lot of people and we have inspired a lot of these guys by the structure we've created here. A lot of people want and desire structure -- we have structure here now. We have a reason for us being here and doing what we do and everybody understands," he said.

"Things don't just happen because you want them to. There's a process for everything," he said. "Things never move as fast as you would like. It's always a lot slower.

"I have a deeper appreciation for this job and what these guys do. There's a deep commitment from these men and women here. They may get a little stipend, but that's not why they do it. They do it because they know they're needed. They truly believes they have a calling," Wassman said commending all the emergency personnel with the department, including volunteers.

"These guys may be sitting at home at night with loved ones and get sent on an emergency and they all come together," he said. "The training we've done over last few years, allows them to be able to work together. They have camaraderie and cohesiveness. They've become tougher. Most of it goes back to training."

He said training in a department with mostly volunteers is difficult because there is such a wide range of training backgrounds of the personnel. Whereas in a professional department, employees are on a similar level of training. He said it's a challenge to educate the new and not bore the 30-year guy.

"I think we've done a good job at that and taught basics and some advanced," he said.

"I keep coming back to it. In order for this department to provide the needed coverage for this city and the surrounding area ... I think the biggest thing this city and department needs is the moving forward of full time personnel, fire and EMS, trained equally in both. We don't need segregation," he said.

"This is a part-time gig for every one of until we have full time personnel," Wassman said, explaining that every medic and EMT works 56 hours a week at other departments and then works on his days off at Pea Ridge.

"I have thoroughly enjoyed being here. I love this community, this department and I hate to leave, but for me and for my family, it's what I need to do," he said.