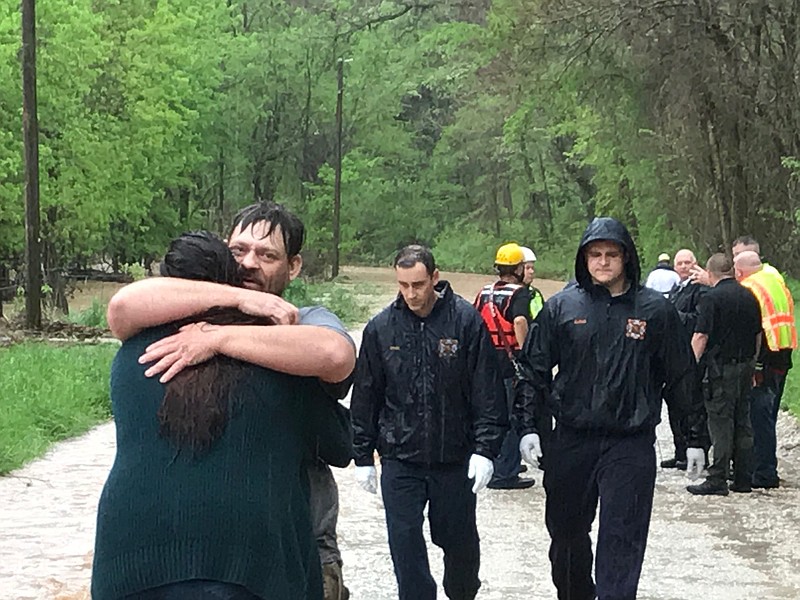 As torrential rains fell in Benton County, a couple of houses on Rustic Drive in Little Flock were beginning to be surrounded by rising water. Em Douglass and her son, Jaxon Douglass, 21, live just a short distance from the home of her parents, Jeff and Debbie Ratliff, who also had three other people in their home Wednesday morning.

Mrs. Douglass’ brother, John Adams III, lives in their parents’ home. He called asking her for help when they realized the water was rising Wednesday.

Jaxon Douglass went to his grandparents’ home to help them. Very quickly he, and his uncle, John Adams III, were stranded by water.

“My brother went that way and my dad, he made it to the house,” cried Em Douglass, as she described the events of Wednesday morning. “My son, Jaxon, is 21. My brother, John Adams III is 40 (well, he’ll be 40 the end of next month)… and his pregnant girlfriend is in there,” pointing to the house where her parents, an aunt, Anita Townsend, and her grandfather were stranded.

“He just washed away,” Douglass said of her brother, as she sat by the fence waiting for word from emergency personnel who were inflating rafts to rescue the residents of the house. Adams was found in brush further down from the house and was eventually pulled to safety by Bella Vista and Rogers water rescue personnel.

“I was on cement blocks,” Jaxon said, after being rescued. “I tried getting back out of there, but the water came in too fast. I was helping my grandparents because it was starting to flood. the water wasn’t too bad. But, when I got out there, it came on fast.”

“They did a great job,” Ms. Douglass said of the firefighters. “They kept me informed the whole time.”

Ms. Townsend, carrying her little dog, Chiquita, walked slowly up the hill to a neighbor’s house. She said there were five people, two dogs and a cat in the house when it flooded. Her brother, Jack Breeland arrived to help take people to safety.

Mrs. Douglass and her son live at 1526 Rustic, just up the road from her parents’ house at 1626. She said she had a little water in her house, but it wasn’t bad. Of her parents’ home, she said, “their house is a loss. I got them hotel rooms, dry clothes, food. I hope I have a house to go back to.

“Never hold on to a bundle of lumber when you can just let go,” Adams said. “I’m just worried about my girl.”

Parkers Chapel set to face Cotter
by Tony Burns
Seniors at forefront of Bobcats’ success
by Jason Avery
Watson departing Strong for Hamburg
by Jason Avery
Airport fuel sales up, but pipeline cyberattack could affect May receipts, manager says
by Tia Lyons
CADC food distribution scheduled for next week
by Special to the News-Times
ADVERTISEMENT