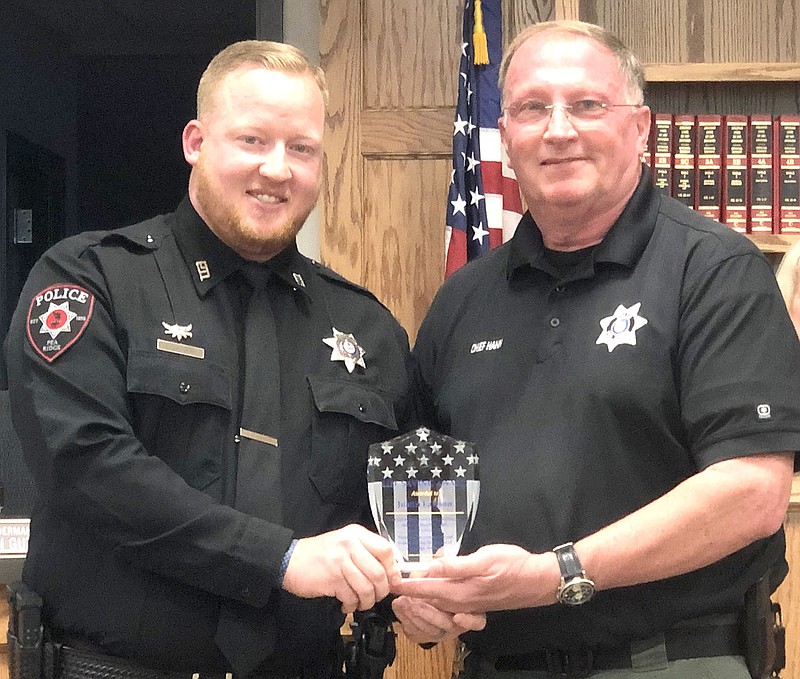 TIMES photograph by Annette Beard Gina Allgaier with Speak Up About Drugs congratulated Pea Ridge Police Officer Justin Lawson for his use of Narcan to save a lady’s life recently.

“The thing about police officers is, when they get up in the mornings, they’re just like everybody else … that all changes when they put the uniform on because they’re putting on a bullet-resistant vest to help protect their life. They’re putting on all this gear to protect them, their partners and the citizens. They kiss their family goodbye in the mornings not knowing what they’re going to get into.”

“When you’re a police officer, you don’t even know if you’ll get to the office before you get your first call … a lot of things that can happen in a day … any of which can turn into a life or death situation,” Hahn continued. “I am so proud of every single one of our Pea Ridge police officers.”

With that, Hahn introduced the two recipients of the life-saving awards he presented to officers Justin Lawson and Brian Stamps, who Hahn described as humble and believing they had done what “anybody else would do.”

First class officer Brian Stamps was on patrol on Tuesday, Nov. 3, 2020, when he drove upon the scene of a one-vehicle accident of a vehicle that was overturned and on fire.

Stamps immediately exited his vehicle with his fire extinguisher, approached the overturned sport utility vehicle that was actively engulfed in flames, and began to extinguish the fire. While Stamps was extinguishing the fire, he saw a male who was attempting to extricate the driver through the sunroof. Stamps reacted without hesitation and dispelled the fire with his fire extinguisher. At the same time, David Bryan used a knife to cut the seat belt from the driver allowing the driver to exit the vehicle. After extinguishing the fire, Stamps assisted Bryan with extricating the driver from the vehicle. Together they pulled the driver away from the crash scene for safety. Both Stamps and David Bryan acted swiftly and decisively into action during this near-tragic event, and their actions undoubtedly saved the driver and potentially others who passed by, according to Police Department public information officer Lt. Michael Lisenbee.

Officer Justin Lawson, who has been with the department for about two and a half years, responded to a scene March 27 for a woman who had stopped breathing after being given medication from a friend. Lawson, based upon his recent training of opioid usage and overdose symptoms, recognized that the woman was experiencing a drug overdose. He administered Narcan and, as a result, the woman regained consciousness and was later transported to a local hospital, where she made a full recovery.

“Without Lawson’s decisive actions based upon training and equipment provided by the Criminal Justice Institute of the University of Arkansas, Officer Lawson would not be able to save this woman’s life that day,” according to a press release issued by Lisenbee.

Gina Allgaier with Speak Up About Drugs told city officials, “Unfortunately, I’ve learned the hard way that not all police carry Narcan.”

Allgaier said prior to the covid-19 shutdown, she was working with the state drug director to educate police officers about drug overdose investigation.

“Y’all are to be commended that you even carry it. I lost my own son to an overdose. I’m extremely appreciative. I guarantee you that there’s somebody out there who loved this individual,” Allgaier said. “Thank you for your efforts to save this individual.”

“We are very proud of our officers’ actions and the amazing acts they committed to preserving life during these challenging events. Both officers were awarded Lifesaving Awards by Chief Lynn Hahn of the Pea Ridge Police Department during the Pea Ridge City Council meeting on April 20, 2021,” Lisenbee said. 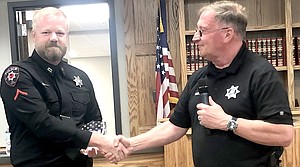 TIMES photograph by Annette Beard Pea Ridge Police Officer First Class Brian Stamps was awarded by Police Chief Lynn Hahn (right) for his actions that saved the life of a women involved in a one-vehicle accident. Stamps was recognized at the Pea Ridge City Council meeting Tuesday, April 20, 2021, for the events of Nov. 2, 2020.
ADVERTISEMENT