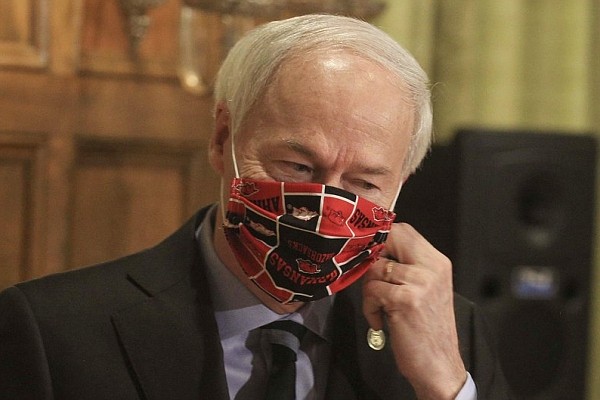 In this April 27, 2020 file photo, Gov. Asa Hutchinson takes off his Arkansas Razorbacks facemask as he arrives for the daily coronavirus briefing at the state Capitol in Little Rock.

Gov. Asa Hutchinson said Tuesday he wants to make coronavirus vaccines available in schools to students age 16 and older before the end of the school year.

At his weekly news conference on the coronavirus, Hutchinson also indicated he didn't plan to take action to block businesses from using vaccine "passports," as the governors of Florida and Texas, both fellow Republicans, have done.

"I don't think that it should be a condition of travel, so I think you have to hesitate about that, but I want everybody to get vaccinated, and I know that there'll be some venues that will require vaccination," Hutchinson said.

Hutchinson made the comments as the state's count of coronavirus cases increased by 163 -- the second daily increase in a row that was smaller than the one a week earlier.

The number of people hospitalized in the state with covid-19 rose by seven, to 152.

[Video not showing up above? Click here to watch » https://www.youtube.com/watch?v=Fvl33HWWmqs]

The state's death toll from the virus, as tracked by the Department of Health, rose by five, to 5,653.

Hutchinson last week extended eligibility for the coronavirus vaccines to all Arkansans age 16 and older.

Previously, the shots had been restricted to people 65 and older, people with health conditions putting them at increased risk of severe infection, residents and workers at long-term care facilities, health care workers, people in certain essential jobs and other high-priority groups.

"It is important for those 16-plus to get vaccinated, which means some of those eligible to be vaccinated are still in high school, and we have vaccines that are available," Hutchinson said Tuesday.

"We want to utilize those in the schools that want to make sure the students have vaccines that are available to them, and we really want to pilot this now while school is in session so we can be ready for the fall."

By then, he said he hopes the U.S. Food and Drug Administration authorizes the vaccines for children age 12 and older, "so that we will have a very comprehensive vaccination program available for our students at that age."

Currently, the vaccine developed by Pfizer and BioNTech is authorized for people 16 and older, while the Moderna and Johnson & Johnson vaccines are allowed for those 18 and older.

Education Secretary Johnny Key said the Department of Education will work with the state Department of Health, physicians and school districts "to set up these opportunities" for students to get vaccinated.

"If we can get more of these students their vaccines," Key said, "it will help us set stage for a good summer, and as the governor said, returning to school in the fall."

Florida Gov. Ron DeSantis on Friday issued an executive order prohibiting businesses from requiring customers to show proof of covid-19 vaccination or recovery from an infection.

In Arkansas, a bill filed last week by Sen. Trent Garner, R-El Dorado, would prohibit state or local governments from requiring proof of vaccination "for any purpose."

Senate Bill 615, assigned to the Senate Public Health, Welfare and Labor Committee, would also prohibit proof of vaccination from being required as "a condition for entry, travel, education, employment, or services."

New York last week became the first state to offer a smartphone app people can use to provide proof of their vaccination status. President Joe Biden's administration has said it doesn't plan to create a federal version.

Bentonville-based Walmart has said it will make customers' vaccination status available on apps being developed through an international initiative.

Hutchinson cited cruise lines as one type of business that might want to require proof of vaccination.

"If I was going on a cruise line, I would be more comfortable if they had an all-vaccination policy," Hutchinson said.

"That way you feel safe, and so I think you have to give latitude to the private sector."

He said Arkansas' government won't require people to get vaccinated, but that he won't prohibit businesses from doing that.

"I think we have to give latitude toward businesses and the private sector so that if an employer wants to have everyone vaccinated in their workplace, that they have the prerogative to do that," Hutchinson said.

While Arkansas' daily case increases have been largely trending downward since mid-January, Hutchinson noted that infections have been on the rise in some other states, making it important to vaccinate Arkansans as quickly as possible to prevent a similar uptick here.

"I'm concerned about the race to get everybody vaccinated and how we're doing in that regard," Hutchinson said.

He said the state is "making a great deal of progress" on vaccinations, but that he wants to do "everything we can to accelerate that."

According to Health Department figures, an average of almost 26,000 doses a day were administered in the state in the seven-day span ending Tuesday, up from about 23,000 a day the previous week.

Arkansas continues to rank near the bottom of states in the percentage of its residents who have been vaccinated, however.

According to the U.S. Centers for Disease Control and Prevention, 867,707 Arkansans, or about 28.8% of the state's population, had received at least one vaccine dose as of Tuesday.

Nationally, 32.6% of people had received at least one vaccine dose, and 19% had been fully vaccinated.

At his weekly news conference on the coronavirus, Hutchinson emphasized the importance of increasing the vaccination rates in minority groups, in particular, saying they're "behind in terms of their vaccination as compared to the percent of the population."

According to Census Bureau estimates and Health Department figures, Black people make up 15.5% of Arkansas' population but as little as 10.3% of the population that is fully vaccinated.

Whites make 76.7% of the state's population and at least 77.5% of those who have been fully vaccinated.

The race of 8% of people who have been fully vaccinated isn't known.

To increase access to the vaccines by minority groups and other populations, a Health Department "strike team" has been holding vaccination clinics since January in Pulaski, Jefferson, Desha, St. Francis, Crittenden and Sebastian counties, Michelle Smith, director of the department's office of health equity and HIV elimination, said at the news conference.

About 9,500 people have been vaccinated at the clinics, Health Department spokeswoman Danyelle McNeill said.

In addition to racial and ethnic minority populations, Smith said the clinics have targeted people with disabilities, faith-based organizations, rural communities and the elderly.

She said the Health Department in recent weeks increased the team's staff from 15 to 45 and plans to hold clinics in more areas.

It has a goal of administering 8,000 vaccinations through the effort in April and having 50% or more of those vaccinations going to members of minority groups, she said.

She said the team is also looking for more volunteers to help staff the clinics. More than 500 volunteers have helped so far.

The team's next clinic, offering the single-shot Johnson & Johnson vaccine, will be from 10 a.m.-3 p.m. today at Shorter College in North Little Rock. People can call (800) 985-6030 to make an appointment, although appointments aren't required.

Col. Robert Ator, who is coordinating the state's vaccination effort, said officials have also been working on "microtargeting" 15-square-mile areas with low vaccination rates and setting up clinics in those areas.

"We've kind of operated at the macro level," Ator said. "Now we're getting down to the micro level."

As a result of the expansion this week of the Federal Retail Pharmacy Program for COVID-19 vaccination, state Epidemiologist Jennifer Dillaha said the vaccines were available in Arkansas at "many but not all" Kroger, Walmart and Sam's Club pharmacies, as well many pharmacies belonging to the Community Pharmacy Enhanced Services and Good Neighbor Pharmacy networks.

At the Department of Corrections, 1,091 employees have been fully vaccinated and 330 others have received their first of two doses, department spokeswoman Cindy Murphy said.

"We were able to use leftover vaccine from the clinics to vaccinate 82 inmates who were identified as high risk for COVID due to age or diagnosed comorbidities," Murphy said in an email.

She has said the department plans to begin vaccinating inmates on a wider scale once the staff is vaccinated.

The total number of vaccine doses received in the state, including through federal programs, rose Tuesday by 58,020, to 1,881,900.

The state reported that 72.6% of the 1,542,210 doses received by providers participating in its vaccination program had been administered.

Of the 339,690 doses received through federal programs, 46.1% had been administered.

Tuesday's increase in cases was larger than Monday's but slightly smaller than the one the previous Tuesday, March 30.

As a result, the average number of cases added to the state's tallies each day over a rolling seven-day period fell by two, to 154.

That was just above the low for this year of an average of 151 cases added each day during the seven-day span that ended Friday.

After falling each of the previous three days, the number of the state's virus patients who were on ventilators rose Tuesday by three, to 26.

In their latest forecast report, released Tuesday, researchers with the Fay W. Boozman College of Public Health at the University of Arkansas for Medical Sciences warned that Arkansas is "nowhere near the the 80% to 90% vaccination needed to achieve herd immunity," and that much of the population is at risk of infection or reinfection.

They said the coronavirus variant first discovered in the United Kingdom "is known to be capable of reinfecting those who were infected with the original variant."

"With the ending of the statewide mask mandate, Arkansas is taking a risk," the researchers wrote, referring to Hutchinson's decision to last week to lift the requirement for Arkansans to wear a face covering in many public places.

They said people should still wear masks even if they're no longer required.

"Being tired of masks or social distancing a while longer is far preferable, both from a population and an individual perspective, than a resurgence of the virus," the researchers wrote.

The report, dated Friday, predicted that an additional 1,136 people will be hospitalized with the virus in Arkansas between March 30 and May 31, with the number of covid-19 deaths increasing by 128.

The cases that were added to the state's tallies on Tuesday included 71 that were identified through polymerase chain reaction, or PCR, tests

The other 92 were "probable" cases, which include those identified through less-sensitive antigen tests.

The number of cases that were considered active fell by five, to 1,602.

Among prison and jail inmates, the Health Department's count of cases rose by one.

Murphy said the Ouachita River Unit in Malvern and East Central Arkansas Community Correction Center in West Memphis each had one new case.

The Malvern prison had 27 cases that were active as of Tuesday. The West Memphis lockup had one.

The number of the state's virus patients who have ever been on a ventilator rose by one, to 1,592.