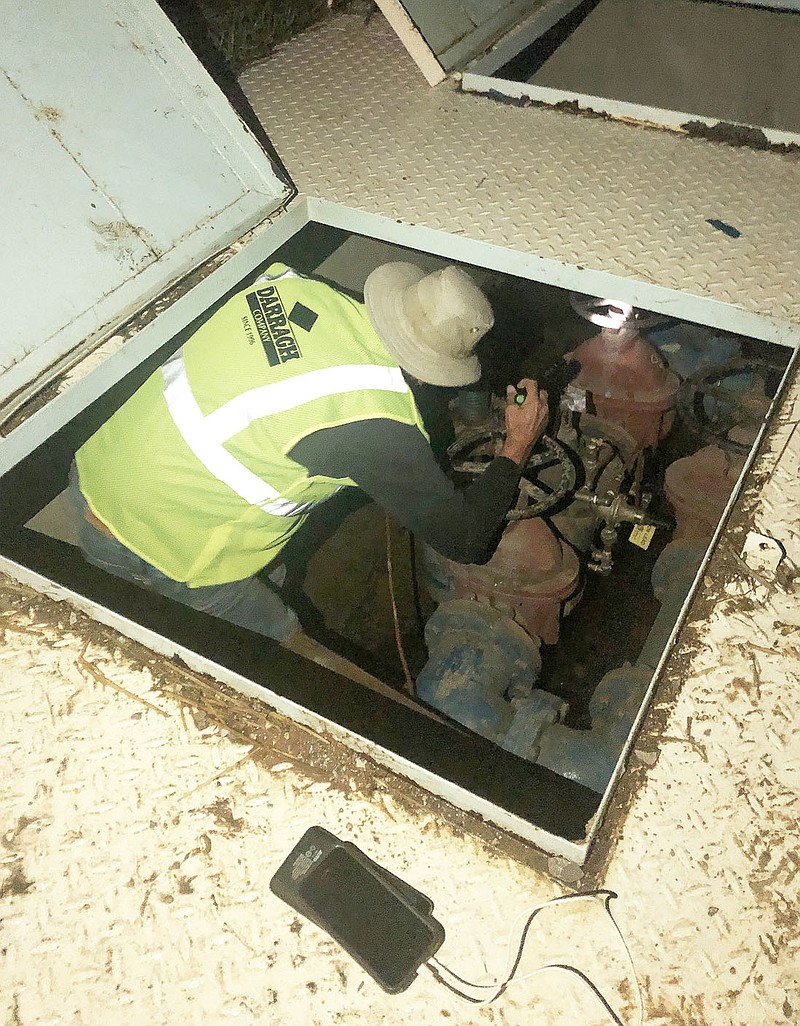 GARFIELD — Mayor Gary Blackburn watches the gauges on the pump at the Garfield water tower as city employee Gary Wright and Josh Carney look for the leak that resulted in emptying the city's water tower, leaving as many as 200 customers without water Tuesday, Sept. 22, 2020.

GARFIELD -- A water leak Tuesday, Sept. 22, which emptied the city's water tank set and cut off water to a number of customers of a chain of events that kept city employees working throughout the week restoring water to customers and closed Garfield Elementary School Wednesday, Sept. 23.

What was described by Mayor Gary Blackburn as "the worst possible scenario" Tuesday with discovery of the site of the water leak as water was found to be gushing up from a crack in the cement of the parking lot at the Short Stop, a convenience store and restaurant along U.S. Highway 62. Water service was restored shortly after 6:30 p.m. Wednesday with a boil order in effect.

On Friday, more problems were discovered as the pressure regulator valve in the water main off Sugar Creek Road clogged stopping service to customers along that road.

"While I'm just sick about the problems," Blackburn said, "I'm glad over the way it was handled."

Blackburn said as of Tuesday, Sept. 29, all customers have water and there are no boil orders in place.

He said that normally water samples have to be taken twice when there's a leak and the samples sent to Little Rock, Scott Borman with Two-Ton had his crew stay late to test at the local lab to curtail the boil order as soon as possible.

Once the initial leak was discovered, temporary measures were taken to restore water to customers including looping service through the water main on Sugar Creek Road which usually serves 65 customers. With the loop, lines from that main were providing water to 240 customers. That caused a malfunction in the pressure regulator valve and shut off water again.

"Had that not happened," Blackburn said, "it wouldn't have manifested itself for years."

He said a "circuit rider for Arkansas Rural Water" inspected the system on Monday, Sept. 28, and determined the cause of the problem.

Late Tuesday, Sept. 22, Blackburn, who lives near the town's water tower, said he was the first to notice the problem when he went to wash his hands and didn't have water. He immediately went to the water tower expecting to find that the altitude valve had shut off the water, a not uncommon experience.

What he found was that the 40,000-gallon water tower was empty. The gauges showed around 50 psi coming in and nothing going out into the system where it should be 11 psi going into the system.

"I saw that the tank was empty," Blackburn said, explaining that he called city employee Gary Wright and they diverted water away from the tank by going away from the elevation valve to a pressure reducing valve, but the gauge measuring the water pressure going out remained close to zero. "So, we've got a big leak somewhere."

"It's just shooting into the system," he said.

"They guys are going around looking for it and they're going around shutting off valves around town," Blackburn said. At one point Tuesday night, it was estimated that about 190 of the 268 customers either have low water pressure or no water. He said because of a master meter off Sugar Creek Road, about 70 customers aren't affected.

"Josh Carney is always our back-up. You get a problem like this, two Garys aren't going to fix it," Blackburn said.

While investigating late Tuesday, Sept. 22, Wright found the water pressure was acceptable at the Pea Ridge National Military Park and at the Church of Christ, both west of downtown.

"Water is why I'm grey haired," Blackburn said. "Water is what I think about 24 hours a day seven days a week. I never stop thinking about water.

"For the last year, we've been fooling around with this retrofit. There's just a lot of opportunity for things to go wrong. Essentially there's just Gary and I and we can call in Josh. We've got a lot of miles of line," he said. "I'm not complaining. I lived here when we were on the well. I'm glad to have good clean water."

On Friday, there was also a leak discovered in a service line caused by a rock. That was repaired relatively easily by Big J Construction, Blackburn said.

He said the water problems will ultimately cost the town about $10,000. 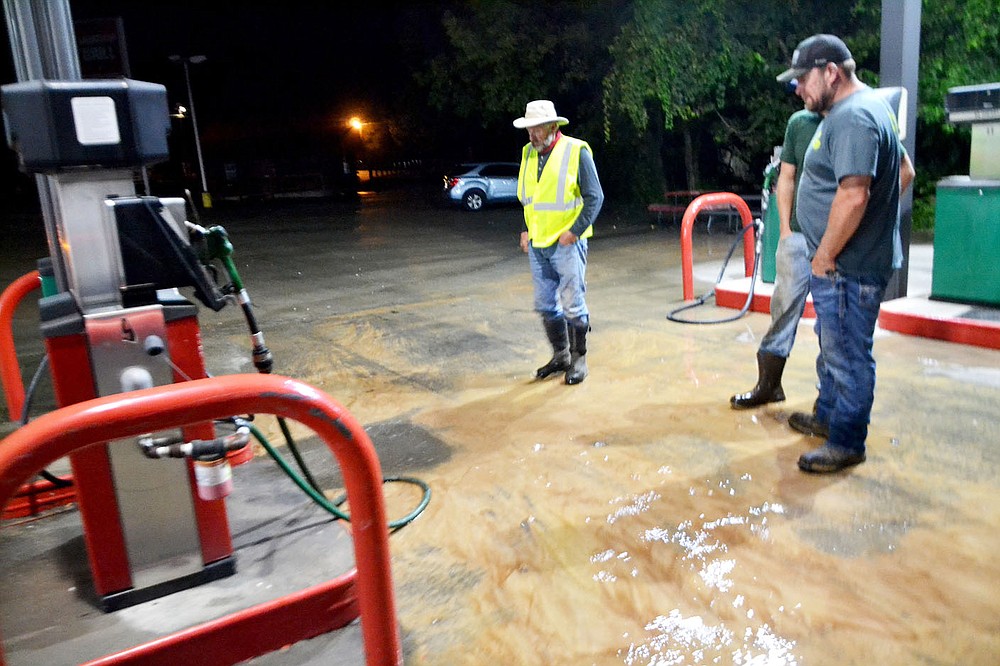 GARFIELD — Mayor Gary Blackburn watches the gauges on the pump at the Garfield water tower as city employee Gary Wright and Josh Carney look for the leak that resulted in emptying the city's water tower, leaving as many as 200 customers without water Tuesday, Sept. 22, 2020. 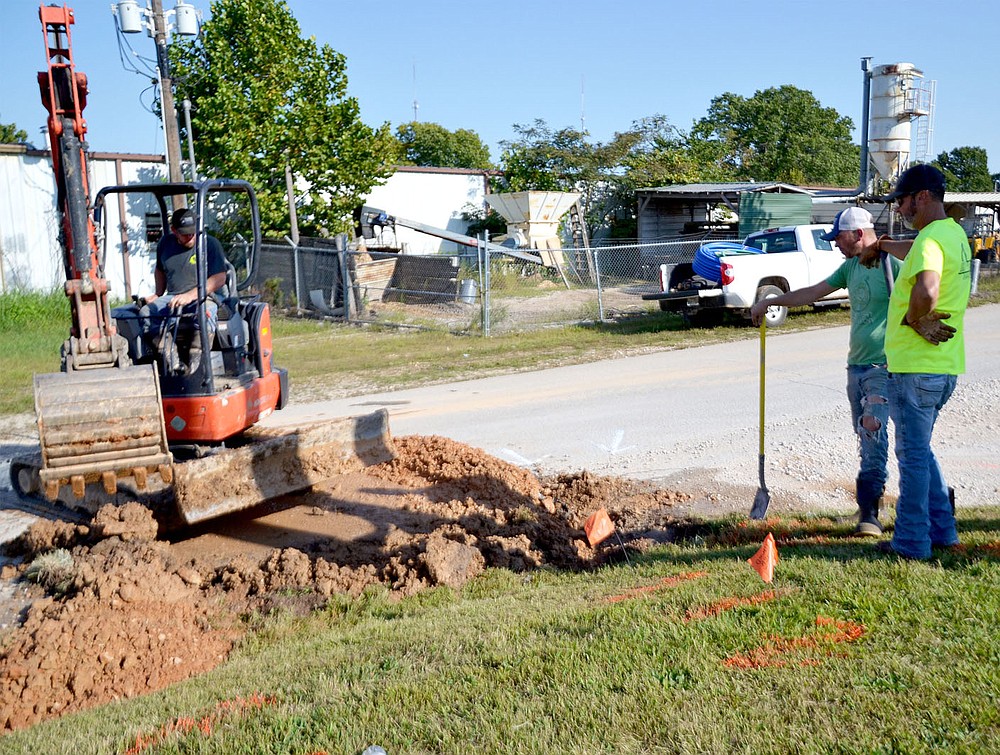