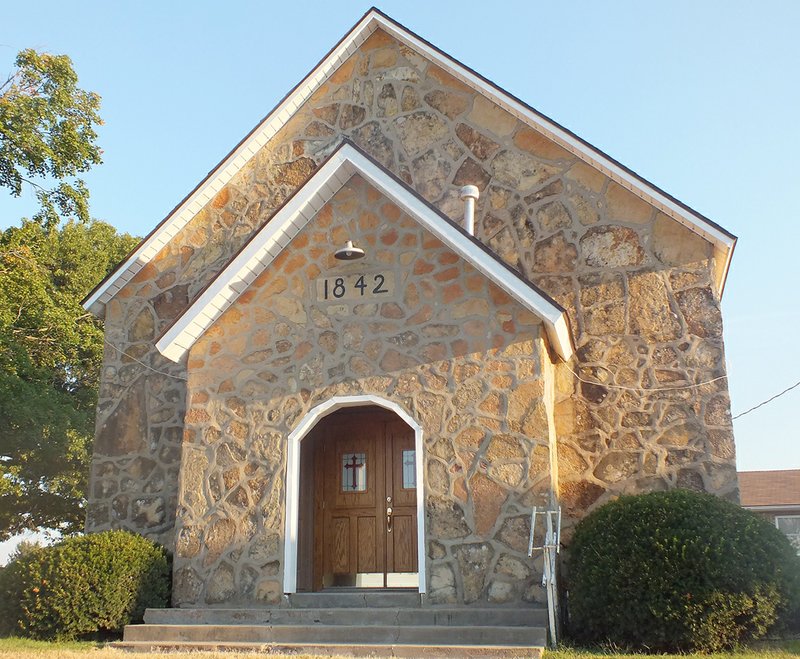 TIMES photograph by Annette Beard The sandstone-sided Twelve Corners Baptist Church was constructed in 1842 and covered with stone in the 1950s. It was begun in 1839 in Elkhorn Tavern. It has survived war and the ravages of nature and still serves the community, according to pastor Rick Booyer.

The state was still in its infancy, as was Benton County; tribes of Cherokee had recently passed through the area on the Trail of Tears in 1837. And, in 1839, William Ruddick was living in Elkhorn Tavern when he and other family members formed Twelve Corners Baptist Church which began meeting in the Elkhorn Tavern.

Samuel Burks (Ruddick's son-in-law) is also named as an original member. Land on the "Bentonville Detour" owned by John and Margaret Buttry, was donated for the church, school and a cemetery, according to the history of Twelve Corners. That road is now named Twelve Corners Road and goes north off Arkansas Highway 72 east of Pea Ridge.

Rick Booyer, pastor of Twelve Corners Baptist Church, for nearly 21 years, said the church was still meeting in the one-room church when he first began preaching at Twelve Corners. In the past two decades, a new worship center, classrooms and a pavilion and several acres of land have been added to the church property.

"We have a rich history and we minister in the present, but we definitely want to prepare for the future ministry of the church, too," Booyer said. "A church that isn't thinking ahead, will plateau very easily. So, we remember our past, we relish the present, and we strive for the future."

Ironically, Booyer said, that the land donated by the Buttry family in the 1840s was not officially signed over to the church until 1898. It was then called the Twelve Corners Baptist Church of God, Booyer said.

According to Booyer, there are 12 corners on a cross. He said that travelers from a community called Twelve Corners in Tennessee also helped build the 1840 building. That fact was recorded by local historian Alvin Seamster.

Seamster also wrote that the first structure built on the land donated by the Buttrys was a log structure that "followed the Tennessee design with 12 corners formed by a shallow entrance annex facing south." That building was built in 1840, burned in 1841, and a new oak-framed building with "shiplap siding" was built in 1842, the date above the door on the building.

"In 1845 the Southern Baptist Convention was formed. As soon as word got back here, Twelve Corners declared themselves a Southern Baptist Church," Booyer said, proclaiming that the church is the oldest protestant church in the state of Arkansas and possibly west of the Mississippi River. He said some people disagree.

During the Battle of Pea Ridge of the Civil War (March 1862), the church was used as a hospital, Booyer said. He said that it is recorded that people were buried directly behind the church and later exhumed, but that anytime the church wants to build, they have to notify officials from Fort Leonard Wood to "make sure we aren't going to dig up a soldier."

There are about 100 active church members today. Over the past 175 years, the membership number has waxed and waned, with only a handful of members when Booyer was hired in January 1994.

"The first Sunday I was there, there were eight people present," Booyer recalled.

"Our ministry is to lead the lost to Christ and to nurture the saved."

"We have a rich history. We minister in the present, but we definitely want to prepare for the future ministry of the church, too. A church that isn't thinking ahead will plateau very easily. So, we remember our past, we relish the present, and we strive for the future," Booyer said.

Over the years, there have been many weddings, funerals, baptisms and baby dedications. Booyer recalled one time especially memorable to him.

"One night, I was preaching about the rapture. We were in the old sanctuary. Rachel (his daughter), just a wee little girl, wanted to sit with Clint Schooley. So, halfway through the message, she got up from where she was sitting with her mama and walked back to Clint. Right then, the center ceiling fan fell. It landed right where she had just walked.

"I had just said 'Jesus could split the skies at any moment.' That was especially memorable for me," he said.

All former pastors have been invited to the celebration scheduled for 12:30 p.m. Sunday, Oct. 5. Special music is planned.

Editor's note: Information for this article was also gathered from: Jines, Billie. Benton County Schools That Were. Pea Ridge, AR: B. Jines, 1989;